A future Labor government would spend $1.1 billion to make 465,000 TAFE places free and fund an extra 20,000 university places, under a plan heavily focused on pandemic recovery.

The spending includes $621 million over four years that would be spent on free TAFE courses in industries hit hard by the COVID-19 pandemic like hospitality and tourism and also look to fill future skills gaps and vacancies in the construction, resources, digital and manufacturing industries. 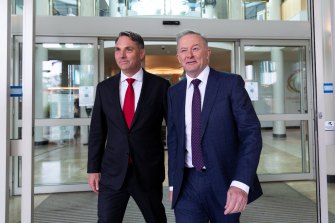 About $481 million over two years would be spent on the 20,000 university extra places and would also target skills shortages — which have been exacerbated as Australia shut its borders for 18 months — to train more engineers, registered nurses, tech workers and teachers.

There would be new funding for additional courses in so-called “national priority” areas including clean energy, advanced manufacturing, health and education.

The plan will be unveiled by Labor leader Anthony Albanese during a major election campaign-style rally in Sydney on Sunday, two days after the ALP launched its climate change policy.

The skills and training announcement is Labor’s biggest on-budget spending since the October 2020 announcement of $6.2 billion for childcare, and underscores the major parties are moving to an election footing ahead of a poll that will be held no later than May 2022.

“For nearly a decade, the Liberal-National government has cut TAFE and slashed apprenticeships. Today, we have 85,000 fewer apprenticeships and traineeships compared to 2013. At the same time, it’s getting harder and more expensive to go to uni,” Mr Albanese said ahead of the policy launch.

“Free TAFE will help rebuild industries hit hardest by the pandemic, like hospitality and tourism, as well as meet current and future needs in the care economy, including jobs like childcare, aged care, disability care, nursing and community services.

“It will also provide more opportunities for apprentices and trainees. And fill skills shortages like those in trades and construction, resources, digital and cyber security, new energy and advanced manufacturing.”

Labor deputy leader and skills spokesman Richard Marles said that under Labor’s plan, “anyone pursuing a TAFE course which is on the National Skills Commission’s priority list will do it for free”.

“We face a skills crisis in Australia — we need more tradies and care workers — and this is the plan that fixes the problem.”

The Victorian government began rolling out free TAFE in key courses such as plumbing and nursing in 2019 to fill skills shortages and expanded the program in mid-2020 as part of its pandemic recovery plan. It has proved to be highly popular, though there have been teacher shortages.

In practice, the money would flow through to the states who would receive a share of the money — based on their population — and then be able to decide where their skills shortages were, given that the types of shortages are different in Western Australia compared to Sydney or Melbourne.

Federal Labor argues that under the Abbott-Turnbull-Morrison governments, cuts to TAFE funding and apprenticeships have meant there are 85,000 fewer places than in 2013 but TAFE graduates earn about $19,000 per year more than people without qualifications and add billions to the economy. 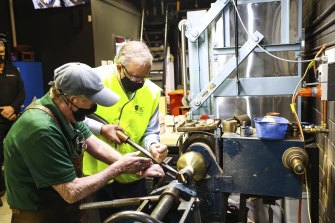 Leader of the Opposition Anthony Albanese with Sparrow King during a visit to W. J. SANDERS in Marrickville, Sydney on October 12, 2021Credit:Dominic Lorrimer

The number of people missing out on a university place has risen to 50,000 people.

To date, the federal opposition has unveiled few major election promises as Mr Albanese has deliberately adopted a smaller target strategy than that of his predecessor, Bill Shorten, but the two major announcements on climate and then skills and training policy in three days fit neatly with the Opposition Leader’s oft-repeated plan to “kick with the wind in the last quarter”.

The opposition has promised a $20 billion “Rewiring the nation” policy to modernise the electricity grid, which is now part of its broader climate package, a $15 billion national reconstruction fund, $10 billion for social housing, and legal safeguards so that workers in the “gig economy” are paid the minimum wage.

The climate policy is designed to cut emissions by 43 per cent by 2030 and reduce annual household electricity prices by $275 within three years, and has been welcomed by business groups.