The atmosphere at the Glasgow climate talks shifted from one of crashing doubt to faint hope as the second day of talks and speeches by world leaders drew to a close with a string of announcements of emission reduction initiatives.

The most significant work was done in the afternoon, when President Joe Biden alongside EU President Ursula von der Leyen officially launched a Global Methane Pledge, with over 80 nations declaring they would cut methane emission by 30 per cent by 2030.

“Cutting back on methane emissions is one of the most effective things we can do to reduce near-term global warming and keep 1.5 degrees,” said European Commission president Ursula von der Leyen. “It is the lowest hanging fruit.”

The pledge had been months in making, though some signatories, such as Brazil and Kuwait, only agreed to join a day earlier. Six of the world’s 10 largest methane emitters covering about 45 percent of global methane emissions signed the pledge. Australia was not among them, although Brazil, long considered a climate pariah, has signed up. 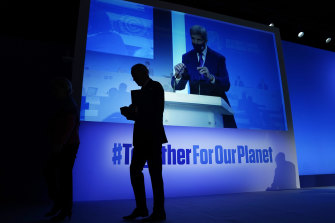 Methane, which is the largest component of natural gas, is the second most prevalent greenhouse gas in the atmosphere, but since over a 20-year period it is 80 times more potent, reductions can lead to quick impacts on the warming trend.

A second pledge was signed by 40 governments responsible for over 70 per cent of the world’s GDP, including Australia, EU, US, China, India, Namibia and, Japan, to accelerate the deployment and reduce the cost of zero-emissions solutions in some of the highest-emitting industries such as steel-making, power-generation, hydrogen development and transport.

The UK government claims the so-called Glasgow Breakthrough Agenda could see the four sectors create 20 million jobs worldwide, add around 4 per cent in additional global GDP and amount to $16.7 trillion in investment by 2030 across both emerging and advanced economies.

The pledge to end deforestation by 2030 was also formally announced on Tuesday. It was welcomed as a substantial development not just because it attracted the support of nations such as Indonesia, but because it was backed with real cash – US$20 billion ($27 billion) of private and public funding to help end logging and protect forests.

These pledges, coming on top of the surprise announcement by India that it would reach net zero emissions by 2070 and build 500 gigawatts of non-fossil fuel energy by 2030, led some delegates to breathe a sigh of relief.

Mohamed Nasheed, a former Maldives president and an ambassador for a bloc of nations at the COP known as the Climate Vulnerable Forum, said he believed the conference’s main goal of securing pledges from governments in line with the Paris Agreement’s more ambitious target of keeping warming to 1.5 degrees was now in sight.

Boris Johnson, who as COP host has become its chief cheerleader, also claimed to have “cautious optimism” due to the pledges.

The decision of Chinese leader Xi Jinping not to attend, the distraction of COVID-19 and the difficulties Biden is having passing a domestic climate package had led some to fear the COP might end in absolute failure. That concerned seemed to ebb, a little, on Tuesday afternoon.

With the majority of world leaders now to depart Glasgow, delegates, diplomats and staff will begin the arduous work of negotiating how the $US100 billion ($134.6 billion) in financing a year that the rich world promised developing economies in Paris might be secured and delivered.

The issue was raised by developing nations time and again in speeches over the past two days. According to Kyte the failure to deliver on the promise has breached trust in the Paris process complicated negotiations. 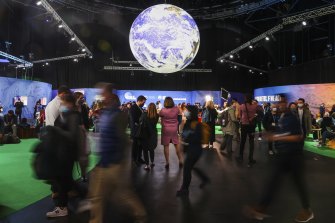 Even if it is resolved over the coming days, the damage is done, she said.

How that pledge might be met, and then updated, will be a key focus of negotiations on the third day of the conference, but not the only one.

Negotiators at COP26 must also address how to fund the cost of climate loss and damage – predicted to be somewhere between US$290 and US$580 billion annually in developing countries alone by 2030.

Another key set of negotiations will address the rules that will govern the global carbon market that was agreed to in Paris in 2015. These talks were begun in Poland in 2018 but moved slowly and ground to a halt when the pandemic struck.

And though some found grounds for hope on the sidelines of the COP on the day 2, on the main stage, leaders’ speeches continued. In some the anguish and anger was vivid.

“Leaders of the G20, we are drowning and our only hope is the life-ring you are holding. You must act now, we must act together.”

Get daily updates on the climate summit that will shape our future. Sign up to our COP26 newsletter here.

a, despair, Early, From, progress
Celebrities