London, Oct. 9 – After an announcement yesterday awarding him the Nobel Prize for Literature, Alexander Solzhenitsyn made a statement which, in effect, dares the Kremlin to shut him out of the country. 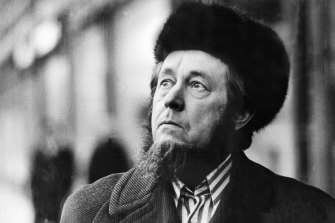 He said: “I am grateful for the decision. I intend to go and receive it personally on the traditional day as far as this will depend on me.”

When Boris Pasternak was awarded the Nobel Prize in 1958, the Kremlin told him to go to his “capitalist paradise” if he wanted to – but made it clear that he need not bother to come back. Similar threats have been made to Solzhenitsyn more recently.

Pasternak replied, in a letter to Mr Khrushchev: “I am linked with Russia by my birth, life and work. I cannot imagine my fate separate and outside Russia.” He declined the award, remained at home, and was virtually hounded to death.

Last year, after Solzhenitsyn was expelled from the Writers’ Union, the Moscow Literary Gazette said “nobody is going to hold Solzhenitsyn and prevent him from going away, even if he desires to go where his anti-Soviet works and letters are received with such delight every time.”

Solzhenitsyn had, in effect, replied to this when he rejected his detractors’ claim that his views had somehow been inspired from aboard.

Presumably, Solzhenitsyn was aware yesterday of the possibility that, if he leaves Russia to collect his prize he might never be allowed in again.

AAP – Reuter reported from Moscow that the official Soviet Writers’ Union tonight deplored the decision to award Solzhenitsyn the Nobel Prize, charging that the move was politically motivated.

Solzhenitsyn did not receive the award in 1970 because he feared Soviet authorities would not allow him to return. Instead, Solzhenitsyn received his prize at the 1974 ceremony after he had been expelled from the Soviet Union. He eventually returned with his citizenship restored in 1990.