Home » Lifestyle » From the Archives, 1992: Victoria’s day of protest

From the Archives, 1992: Victoria’s day of protest

John Halfpenny reckoned it was the largest demonstration that Melbourne had seen. One of his union colleagues claimed 200,000 participants. Jim Cairns guessed at about 100,000, as big as any of the 1970 anti-Vietnam war marches that he led. Police Superintendent Brian Casey put the figure at between 75,000 and 100,000. 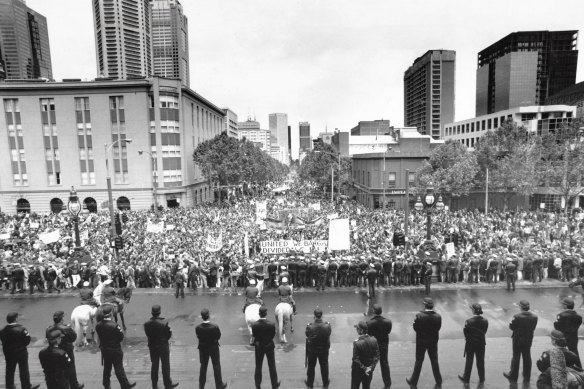 Estimating crowds is always dodgy, particularly when the crowd is stretched around eight city blocks. What is undeniable is that the yesterday’s rally against the Kennett Government’s industrial legislation was very big indeed.

Jeff Kennett will ignore it at Victoria’s immediate peril, and ultimately at his own. He has already managed to transform John Halfpenny, for so long Victoria’s favourite bogeyman, into a hero of the masses, at least for the moment.

What Mr Kennett will do next is unclear. A populist Premier who makes himself exceedingly unpopular with a sizeable slab of the populace has only two ways to go: he can tough it out or he can beat a retreat. It is perhaps fortunate that Mr Kennett, that fabled quantum leaper, is as adept at leaping backwards as forwards. 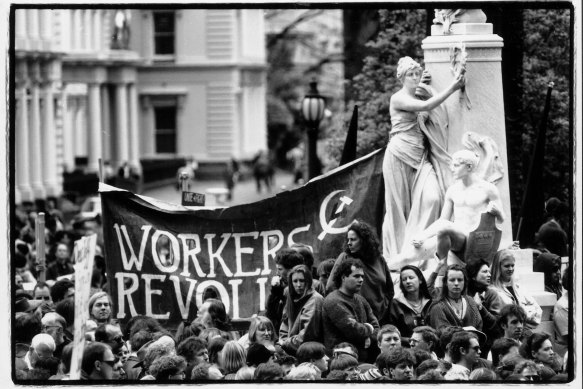 As he considers his options he needs to take account not just of the sheer size of yesterday’s rally, but of its mood and of the sort of people who were there. I have covered a lot of demonstrations, here and abroad, from Northern Ireland to Argentina. While all rallies have things in common — the rhythmic chanting, the placard-waving, the hoarse, overblown oratory, the camaraderie — each has its own peculiar character.

What struck me about this one was the restraint, the determination and, yes, the respectability. It is a very peculiar mutiny that brings forth detachments from the zoo, the Public Records Office and the National Gallery.

I suppose there were the usual anarchists out there in the multitude, but they were on their best behaviour. Presumably somebody had told them that a disciplined march, if the numbers are large, is much more difficult for politicians to dismiss or denigrate.

All causes lose their passion over time, but these marchers gave the impression that they were ready for a long haul, that yesterday was not a single, symbolic gesture of outrage but a declaration of war against a perceived threat to their personal security and in defence of acquired rights. 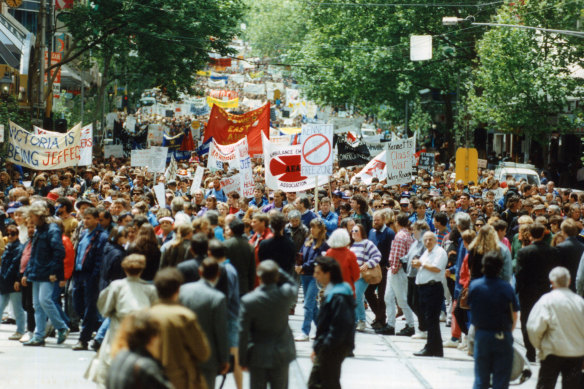 When Mr Halfpenny told them to maintain the momentum —“Every day we will get angrier and angrier, and if need be we will be back here again” — the enormous cheer suggested that it was no idle boast.

The marchers and strikers are, of course, a minority of Victorians, but Mr Kennett would be wise to note that a great many of them are ordinary, work-a-day Victorians who are suddenly as mad as hell. Suburbia militant.

My first taste of them was at a 9 am, marshalling a rally for members of the State Public Services Federation in the Carlton Gardens. They chatted quietly between the warm-up speeches, clutching placards whose messages ranged from the plaintive (“Where’s the Justice, Jeff”), to the defiant (“I’m a public servant and proud of it”), to the tasteless (“If Libs get up your nose, PICK-ET”), to the biblical (“Judas Jeff”), to the poetic (“Sack the Libs for telling fibs”) to the historic (“Dump Il Duce”). 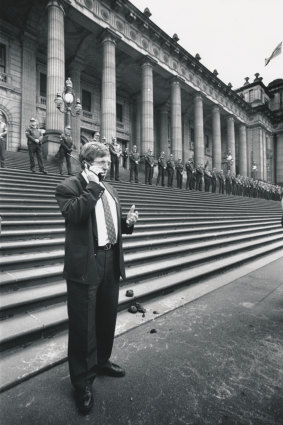 John Halfpenny at the protest.Credit:Peter Charles

The bureaucrat battalions — including six brave souls from the Premier’s Department — were exhorted by their union vice-president, Mr Bill Deller, who ranks second only to Mr Halfpenny in the Liberal demonology. “The main reason we are here,” he told them, “is to show to ourselves that we are as big and as ugly and as horrible as any other union in this state.”

Warming to it, Mr Deller warned that the Government’s legislation “threatens the entire union movement with extinction if we are unable to roll back the Kennett and Gude attack”.

After that, the assembled public servants, doing their utmost to look big and ugly and horrible, strode off to join the main body of protesters in the Treasury Gardens. Most of them did not make it that far: the park was full to bursting by the time they arrived and they settled for joining the seamen’s union and the health workers outside Parliament.

There, in spite of a short, chill sleet-storm, they made the best of the occasional diversion, including an almost diffident appearance at the top of the Parliament steps by Joan Kirner. “We want Joan,” they chanted, but the former Premier stayed for only a moment. “It is very sad that in 1992 people have to turn out in these numbers to protect democratic rights,” she told reporters.

The police provided better entertainment, and the only nasty moment I saw all day. This came when a line of policemen wearing leather jackets and baseball caps and bearing truncheons appeared on the steps. They looked inappropriately menacing and were greeted with a huge chorus of boos. It was understandable, but a bit unfair: as far as I saw, the police were patient and courteous.

Superintendent Casey explained that the baseball caps were “new issue”. “The usual police caps tend to be unstable in crowd situations when you can get jostling,” he confided. Later he was to tell me that there had been no incidents. “They were very well controlled, very cooperative” he said. The rally was one of the biggest he had seen in his 35 years of service.

Jim Cairns, who also has some expertise in these matters, agreed. While it would be difficult to make a comparison until photographs had been studied, he said he fancied the demonstration was as big as his Vietnam moratorium inarch on 8 May, 1970; if anything, the crowd yesterday seemed more tightly packed. “It was also more vociferously committed. The big 1970 march was very quiet. In this one, they have really been expressing their feelings, and those feelings are very strong.”

Certainly, the multitude was noisy. When Mr Halfpenny eventually arrived at the head of the marching column, whose tail was just beginning to move off from the same spot, he quickly had them roaring with his call for “a campaign of anger”. They sang “Solidarity Forever” and chanted “If you hate Jeff Kennett, clap your hands.”

I don’t know if Jeff Kennett could hear them, but if I were he I would be considering a change of tactics, if not of strategy.