Long before the spectacles provided by the Star Wars saga, Game of Thrones and the Marvel movies, there was the Hollywood musical. It was all the rage from the coming of sound in the late 1920s through to the passing of Hollywood’s ‘‘golden age’’, which coincided with the decline of the studio system in the 1960s. From time to time, musicals still turn up on our screens (Frozen, The Greatest Showman, Rolling Thunder Revue: A Bob Dylan Story), but its history dwarfs its present status.

Jeanine Basinger’s handsomely presented, exhaustively researched, 634-page history of the genre returns us to where it all began, astutely tracks the route it took through the rest of the 20th century, and – in its last three chapters, pessimistically titled ‘‘The Death of the Musical?’’, ‘‘Epitaph’’ and ‘‘Final Number’’ – reflects upon its current condition. 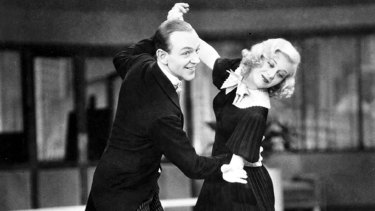 Fred Astaire and Ginger Rogers go through their paces in the 1936 film Swing Time.Credit:AP Photo/HO

Basinger, the prolific author of previous books about American cinema, including The World War II Combat Film: Anatomy of a Genre and A Woman’s View: How Hollywood Spoke to Women, 1930–1960, is an academic and a film archivist (at Wesleyan University in Connecticut). But inside her, as she explains in her book’s introduction, there’s also a kid who grew up on musicals and who still visits them like old friends.

Her love for the genre shows in the way she surveys the field: her writing is relaxed, conversationally engaging and infectious in its enthusiasms. Her descriptively rich detailing of sequences makes you want to check out the films for yourself (or go back and watch them again). At the same time, her mindset is a scholarly one, guiding her glance across the lesser-known productions as well as those that are generally acknowledged as the best of the bunch (42nd Street, the 1936 Show Boat, The Wizard of Oz, Meet Me in St. Louis, Singin’ in the Rain, of course, and so on).

She begins, sensibly enough, by trying to define her terrain. Which is not a simple matter. Does a comedy or a drama with songs included, such as Going My Way (1944) or Love Me Or Leave Me (1955), properly qualify as a musical? Should swimming or skating – as in the films starring Esther Williams or Olympian Sonja Henie – be considered in the same way as dance? And what about the full-on concert films (from The Last Waltz and Stop Making Sense to The Rolling Stones: Havana Moon or, indeed, Springsteen on Broadway)? 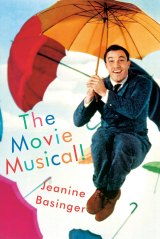 Mmm, she wonders, before turning her attention to the kinds of films she grew up with, the ones starring actor/singers and/or dancers who should need no introduction – such as Fred Astaire and Ginger Rogers, and Judy Garland and Mickey Rooney or Gene Kelly and Bing Crosby – and some who might, such as Jeanette MacDonald and Nelson Eddy, and Lena Horne and Bill ‘‘Bojangles’’ Robinson.

Her commentary is especially interesting when she examines the ways in which these stars of the genre become ‘‘the auteurs of their films’’, sometimes knowingly, sometimes not. She records that Astaire and Kelly had control over how their numbers were shot and presented, and explains how their innovative ways affected the directions that the musicals took.

When they arrived on the scene, Astaire in the 1930s, Kelly a decade later, they saw what was, in their view, a bar that had been set very low and worked to raise it. Astaire insisted that the continuity of a performance be respected (rather than edited into fragments), Kelly aspired to elevate the genre into a respected artform (an ambition that saw him wanting to become a ‘‘Brando of the dance’’).

Basinger goes on to look at the ways in which the careers of musical performers such as Al Jolson, Crosby, Doris Day, Frank Sinatra, Elvis Presley and Julie Andrews, among many others, make them, largely inadvertently, auteurs of their films and illustrate the workings of the star vehicle. This was (and still is) the kind of film that has been shaped around the screen persona of individuals whom the studios have decided that audiences would pay to see (and see again). 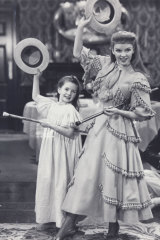 Judy Garland and Margaret O’Brien in Meet Me in St. Louis.Credit:

She also considers the ways in which particular studios – such as Warner Bros., Twentieth Century Fox, MGM and Disney – developed their own styles and strategies. Important directors are paid their due: Ernst Lubitsch, Rouben Mamoulian, Busby Berkeley, Vincente Minnelli and Stanley Donen (who shares his credit several times with Gene Kelly).

But while her study illuminates their contributions to the development of the genre, too often it limits itself to what I’d describe as matters of craft rather than art, a distinction she never draws, and to the musical’s effectiveness as a box-office draw. These are important matters too, but in her preoccupation with them, Basinger undervalues her subject.

Even in the chapter headed ‘‘The Art of the Musical’’, her focus is on how numbers work musically, how they’re integrated into the narrative action, or not, rather than on what they might be taken to mean. How a song and its delivery might, for example, work in counterpoint to its context, as is the case with the Have Yourself a Merry Little Christmas number in Meet Me in St. Louis.

It’s presented as Judy Garland’s well-meaning attempt to comfort kid sister (Margaret O’Brien), who’s distressed at the plan to leave the family home, but it also collides with the film’s profoundly ambivalent perspective on that home. My point here is not that the sequence has to be seen this way, only that Basinger’s general approach doesn’t accommodate the possibility that such a meaning can be excavated if one looks beyond surface details.

The Movie Musical! also fails to accommodate any substantial coverage of musicals made outside the US. Like Benjamin Dreyer's grammar guide, Dreyer’s English, it implicitly assumes that what’s done outside the US is of little importance. Had it been called The Hollywood Musical (with or without the exclamation point), then the fact that it shuns musicals made elsewhere (such as the German operettas of the 1930s, India’s ‘‘Bollywood’’ films, Jacques Demy’s The Umbrellas of Cherbourg and The Young Girls of Rochefort from France, or anything from Britian, let alone Down Under) could be forgiven.

Finally, though, it is true that Hollywood is where the musical hit the heights and the value of Basinger’s work lies in her comprehensive coverage of its incarnations there and her passionate celebration of them.

Tom Ryan is the author of The Films of Douglas Sirk, published by the University Press of Mississippi at $48.40.