The Morrison government is seeking new deals to vaccinate millions of Australians by the middle of this year as it hits back at concerns it is relying too heavily on the AstraZeneca vaccine when other options could be more effective.

The government is in talks with a dozen companies to boost vaccine supply but has been unable to get more doses from Pfizer or any doses from Moderna, another company with a promising candidate to counter COVID-19. 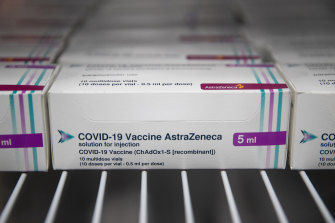 Chief Medical Officer Paul Kelly rejected calls for a pause in the rollout of the AstraZeneca vaccine in a day of heated scientific debate.Credit:Getty Images

Commonwealth Chief Medical Officer Paul Kelly rejected calls for a pause in the rollout of the AstraZeneca vaccine in a day of heated scientific debate about interim results that suggested it was not as effective as the alternative from Pfizer and would not generate herd immunity.

"Lives will be saved by the AstraZeneca vaccine, I have no doubt about that," Professor Kelly said.

"It's not whether one is better than the other. What do we have available? We have the AstraZeneca [vaccine] available for the whole country."

Labor health spokesman Chris Bowen accused the government of failing to sign enough agreements with vaccine developers, adding this meant it would be wrong to pause the AstraZeneca rollout.

"A pause only works if you've got something to replace it with," Mr Bowen said.

The federal government has arranged to buy 10 million doses of the Pfizer vaccine, which is enough for five million people given the requirement for two doses per person, but it has to rely on supplies from the United States or Europe because the product cannot be manufactured in Australia.

The government has relied more heavily on AstraZeneca under a deal to buy 53.8 million doses, enough to vaccinate the Australian population, with pharmaceutical giant CSL making the product in Melbourne.

Australian and New Zealand Society for Immunology president Stephen Turner told The Age and The Sydney Morning Herald on Tuesday the AstraZeneca vaccine was "not one that I would be deploying widely" because it had a lower efficacy rate than other options.

Professor Kelly said the government was talking to Pfizer about securing more doses, as the company announced a deal to provide an extra 12 million doses to Malaysia and ramp up production to 2 billion doses this calendar year, with 600 million going to the European Union and at least 200 million to the United States.

"We posed the question to them: how much vaccine could you give us in the first half of 2021 and they gave us an answer, and then we negotiated on the price," Professor Kelly said.

"And that answer was 10 million. And we are continuing and having many, many conversations with them.

"At the moment, that's what it is, and, frankly, there are other countries in the world that need it more than we do right now."

Asked about the Moderna vaccine, Professor Kelly said "it takes two parties to sign" and the company had to agree to supply doses, something that was still in negotiation.

Asked whether pharmaceutical giant Johnson & Johnson was unwilling to supply any of its vaccine to Australia, he said "there were issues that we were not able to agree on" but he could not comment further because the talks were confidential.

The latest clinical trials showed 94.1 per cent efficacy for Moderna and 95.0 per cent for Pfizer, which is co-developed with German company BioNTech.

While the contrasting efficacy rates shows how each candidate prevents symptomatic COVID-19, the detailed results also showed the AstraZeneca vaccine appeared to be completely effective in preventing people falling seriously ill or dying.

"That's exactly the same as Pfizer on that interim information."

There are no questions about the safety of the AstraZeneca or Pfizer vaccine.

Extraordinary internal and external pressure was brought to bear on the two leading scientific groups that questioned the roll-out of the AstraZeneca vaccine on Tuesday.

Through the course of Wednesday, both the Australasian Virology Society and the Australian Society for Immunology formally recanted their positions and fell in line behind the government's strategy.

Dr Karen Price, president of the Royal Australian College of GPs, whose members will be key in distributing the vaccine, also backed the government.

"I personally won't have any problem if I receive an AstraZeneca vaccine – I am confident it's going to do its public health job," she said.

"There is a strong argument for vaccinating as soon as possible the at-risk population with two doses of the Pfizer-BioNtech vaccine, and holding off for the rest of the population until more doses of it are available," said Professor Adrian Esterman, chair of biostatistics and epidemiology at the University of South Australia.

Monash University adjunct lecturer Michelle Ananda-Rajah also questioned whether the effectiveness of the AstraZeneca was high enough given the interim results.

"There's obviously surging demand for this vaccine and I just wonder whether Australia can try a little bit harder to get us the best vaccines," Dr Ananda-Rajah told Sky News.

In an important statement on their overall strategy, federal officials acknowledged that herd immunity – establishing enough vaccine coverage to force COVID-19 out of circulation – was not a short-term goal.

AstraZeneca's vaccine was unlikely to get us to herd immunity, confirmed Professor Allen Cheng, co-chair of the Australian Technical Advisory Group on Immunisation, on Twitter.

But because experts are still unsure which, if any, vaccines will prevent transmission of the virus, the government is focussing solely on protecting life. Clinical evidence suggests both Pfizer and AstraZeneca do that very well.

If more-effective vaccines become available, or Australia can secure more Pfizer or Moderna, the government believes it is possible to inject people who have been immunised with a different vaccine, increasing their immunity.

Australia does not currently use so-called 'mixed schedules', but health authorities say there is trial evidence showing such a strategy can work.

That may end up being Novavax, Professor Kelly said. Australia has purchased 51 million doses of that vaccine, which remains in clinical trials.

"I have a very strong feeling that Novavax or one of the other protein vaccines will be the long-term option for vaccination for the world, but they take longer to be manufactured and longer therefore for the data to come through about safety, quality, and efficacy," Professor Kelly said.