The result means left wing parties have been given a mandate to hold the state for more than two decades from when Labor came to government in 2001. 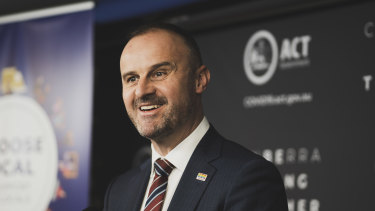 With two thirds of the vote counted, the ABC's Mr Green predicted Labor would have at least 11 seats with two for the Greens in the ACT's 25 seat legislative assembly.

More than half of the votes in the election were cast before polling day, many digitally, contributing to a speedy result.

Paper votes would have to swing heavily to the Liberals, which Mr Green put on 8 seats with the remaining four undecided, for the opposition to win.

Liberal leader Alistair Coe had campaigned on better services and lower taxes while chief minister Andrew Barr touted the territory's response to the coronavirus pandemic — it has gone 99 days without a COVID-19 case — and bushfires as part of his claim to another term.

Vicki Dunne, a retiring Liberal ACT politician who has been in her job since 2001, told the ABC she thought her party had lost.

"As reluctant as I am, I have to agree with Antony," Ms Dunne said.

The ACT uses the proportional Hare-Clarke voting system through which voters determine their own preference flows, so final results will take some time to determine.

Mr Barr has not yet claimed Victory.

It remains unclear whether Labor will gain a majority or once again be forced to rely on the support of the Greens, who have two seats in the current parliament.