The Victorian government has committed to a $3.8 billion overhaul of the state’s struggling mental health system after the state’s royal commission found it had “catastrophically failed to live up to expectations”.

A new tax on businesses with more than $10 million in wages nationally will raise almost $1 billion a year to bankroll the changes to mental health to rebuild the failing system.

The focus of the mental health spending package is $1.5 billion on community-based care to minimise the need for people to travel far to access mental health services. 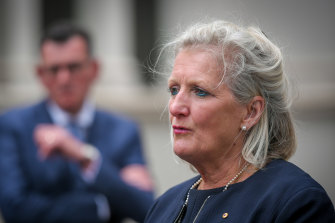 The Royal Commission into Victoria’s Mental Health System found it was overwhelmed and could not keep up with the number of people who sought treatment, with people turned away because “they weren’t sick enough or suicidal enough”.

The budget has allocated $264 million to build the first 20 of up to 60 new local mental health services statewide recommended by the Royal Commission.

This includes six fast-tracked sites at Benalla, Brimbank, Frankston, Greater Geelong, the Latrobe Valley and Whittlesea, which will open by the end of 2022. The next 14 sites are yet to be identified, with priority to go to areas experiencing the greatest level of unmet need.

The Royal Commission into Victoria’s Mental Health System published its 3195-page final report in March. Premier Daniel Andrews has committed to implementing all 65 recommendations made in the report, which include:

More than $950 million will be spent on establishing 22 “reformed” area mental health and wellbeing services, which will replace existing services.

The special levy to fund mental health services, which the government says will be imposed on fewer than 5 per cent of employers, will apply from January 1, 2022.

The levy will raise $386.7 million in 2021-22, rising to more than $800 million a year for the following three financial years to fund the majority of the mental health spend.

Asked why the government had chosen to impose the levy on big business and not all Victorians, Treasurer Tim Pallas said some sections of the community had benefited during the pandemic.

“So with regard to the Mental Health and Wellbeing Levy that the government is putting in place we have made a decision that it is only appropriate that big business makes a substantial contribution,” he said.

Mr Pallas said the budget reflected the Labor government’s belief that Victorians who faced challenges during the pandemic deserved the support and assistance of those who have done comparatively better.

A mental health levy was first recommended in the interim report of the Royal Commission in November 2019, with Commission Chair Penny Armytage saying the amount spent on mental health was “grossly disproportionate” to investment into physical health.

“We do not believe that the standard budget processes will prioritise mental health in the way that it needs to,” Ms Armytage said at the time.

“Given the significance of this issue to our Victorian community and the crisis that we believe our services are in … there needs to be a dedicated funding stream, which will ensure ongoing growth in capacity within the system.”

The new levy will be part of the State Taxation Act that will be introduced into Parliament on May 20.
Mr Pallas said he did not take Upper House and crossbench for granted: “I will simply appeal to the sense of fairness and reason that this sort of intervention is vitally important,” he said.

Each year one-in-five Victorians will experience mental illness, with about 200,000 meeting the criteria for severe mental illness, such as schizophrenia or bipolar disorder. Last year there were 698 deaths by suicide in Victoria.

The state government has pledged to implement all 66 recommendations from the Royal Commission, which it says will take a decade.

The $3.8 billion budget package includes $206 million to increase the mental health workforce, including nurses, doctors and allied health workers, which the government says will create about 3000 jobs.

About $700 million of the overall mental health package will go to the regions.

Our Morning Edition newsletter is a curated guide to the most important and interesting stories, analysis and insights. Get it delivered to your inbox.