The third mass coral bleaching of the Great Barrier Reef in five years is under way, with central and southern regions more badly affected than in the 2016 and 2017 events. Key tourist sites have been spared.

Researchers surveyed more than 845 reefs from the Torres Strait southwards by air as of Wednesday with about 200 more to come in the southern end of the reef region by Friday. 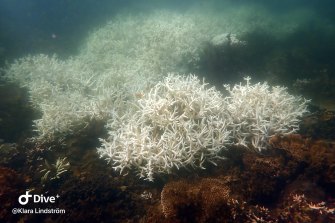 Coral bleaching near Magnetic Island on the Great Barrier Reef. The bleaching is the third such mass event in just five years.Credit:Klara Lindstrom

Terry Hughes, the director of the ARC Centre of Excellence for Coral Reef Studies who has helped lead the survey, said the scientists had seen enough to declare the bleaching was a major one.

Eight flights have been made so far over nine days with three more to come on Thursday and Friday.

"It's pretty obvious now with three flights to go that this event is certainly not a minor one," Professor Hughes told the Herald and The Age. "It certainly makes it three big events in five years."

While the full severity of the bleaching will take some time to determine, the most popular visiting areas of the reef may have been spared. 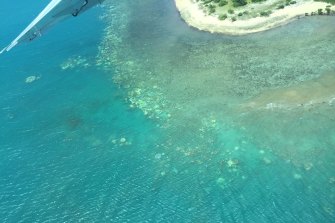 Corals rely on algae known as zooxanthellae to provide the bulk of their energy and much of their vibrant colour. When exposed to sustained abnormal heat – measured in so-called degree-heating days – corals begin to expel the algae, leading to mass bleaching.

How many of the corals recover from the bleaching or just die will take time to play out, and hinge on whether water temperatures return to average temperatures.

Record February heat over the reef set up the bleaching risk, although the arrival of Cyclone Gretel in the Coral Sea this month helped stir up the ocean as well as bring sustained cooling rain and cloud cover.

Scott Heron, an environmental physicist and associate professor at James Cook University, said that, because the southern reef escaped heat stress in 2016 and 2017 unlike the northern and central regions, this bleaching event could have a great impact on its vulnerable corals.

"Branching and table corals grow quickly but have lower heat tolerance than other corals, like boulder corals [which are still affected by bleaching]," Professor Heron said.

The warming ocean is affecting reefs worldwide, including off the coast of Brazil, in parts of Melanesia and Indonesia, he said. 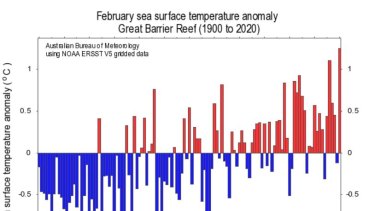 Sea-surface temperatures reached record-high levels on the Great Barrier Reef, topping those in 2016 and 2017 when there was mass coral bleaching.Credit:Bureau of Meteorology

"The key thing with the Great Barrier Reef this year is that temperature anomalies across the reef have been spatially consistent – that is to say it’s just hot everywhere," Professor Heron said.

"In previous bleaching events we have seen a focal area of heat stress," he added. "This year we have seen heat stress from the Torres Strait down to the Capricorn Bunkers. This is global warming realised."

Tony Fontes, an independent dive instructor at Airlie Beach, confirmed the Whitsundays were one of the few regions where reefs were looking relatively healthy, despite a small amount of bleaching that wouldn’t be visible in aerial surveys.

Wave action during Cyclone Debbie in 2017 destroyed significant amounts of coral, so many tourism operators had already relocated their dives sites.

The tourist economy, though, has lately been smashed by the COVID-19 pandemic, which has all but closed the reef to visitors, Mr Fontes said.

"When we come through at the other end, tourism is going to need all the support it can get but most importantly, tourism needs a healthy reef," he said.

Longer term, though, unless governments moved away from backing fossil fuels and boosted help for renewable energy as national economies emerge from the virus impact, the future of the reef would remain in peril, he said.

"To protect our Great Barrier Reef, we need to transition off fossil fuels, particularly coal, that’s the crux of the problem," Mr Fontes said. "Coral bleaching is caused by global warming."

Where is a TV cameraman when you need him? Ben Higgins’ new fiancée, Jess Clarke, shared photos of his romantic proposal but admitted she couldn’t recall exactly what the Bachelor alum told her when he asked her to marry him. “I don’t remember everything you said, but I know that I said yes,” the 24-year-old captioned three photos on Instagram

END_OF_DOCUMENT_TOKEN_TO_BE_REPLACED

Tom Hanks and Rita Wilson's Coronavirus Quarantine Is Officially Over

Tom Hanks and Rita Wilson are back in the United States and looking happy and healthy. The famous couple were spotted in Los Angeles Friday when they arrived back in the States after being quarantined in Australia when they tested positive for the coronavirus earlier this month. In photographs that are making the rounds online (you can see them here),

END_OF_DOCUMENT_TOKEN_TO_BE_REPLACED

Bill Rieflin, a drummer who played with R.E.M., Ministry, King Crimson and others, died on Tuesday, March 24, after an eight-year battle with cancer. He was 59. “Seattle native and lifelong resident, Bill was a world-class musician who was at home on the drums, guitar, bass, and keyboards,” Rieflin’s family said in a statement to Rolling Stone. “He was also

RABBI LORD JONATHAN SACKS: WWII changed us for better – so will virus

The voice of the first talking G.I. Joe action figure is a true American hero

03/28/2020
Recent Posts
We and our partners use cookies on this site to improve our service, perform analytics, personalize advertising, measure advertising performance, and remember website preferences.Ok