Efforts to protect threatened species will be undermined and it will be easier to log native forests if proposed changes to Victoria’s forestry laws are approved, environment groups have warned.

The state government says the legal changes will make the regulations clearer, and provide guidance for the logging industry.

A coalition of more than a dozen environment groups, including the Victorian Forest Alliance, have written to Minister for Environment Lily D’Ambrosio, expressing “grave concern” over proposed changes to forestry codes of practice, and amendments to the Conservation, Forests and Lands Act. 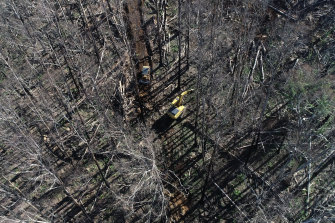 Environment groups have expressed concern about changes to logging regulations.

They say the amendments to the act tabled in parliament in late February would give the minister unchecked power to determine the lawfulness of the logging activity of state-owned logging agency, VicForests.

“In the midst of an extinction crisis, we are deeply concerned these powers will be used to accelerate logging while our precious forests and creatures – already at the brink – are the casualties,” said Victorian Forest Alliance treasurer Paul Macgregor.

“These unchecked powers should not be passed through Parliament without alterations to compel decision makers to rely on the best available science and data when determining if logging can go ahead.”

The government says the changes to the legislation and forestry codes are intended to enable it to introduce “compliance standards” that will effectively codify how the precautionary principle should be applied.

The precautionary principle is a cornerstone of environmental law. It means that decisions must be guided by careful evaluation to avoid, wherever practicable, serious or irreversible damage to the environment.

If this possibility exists, the “benefit of the doubt” is given to environmental protection.

Currently, there are two codes of practice that govern timber harvesting operations in Victoria’s state forests. These include an obligation to comply with the precautionary principle.

The Victorian Government says the amended legislation does not change any existing rules or environmental standards, or give the minister the power to alter the code of practice in any new ways.

“The legislation simply creates a way for the Department of Environment, Land, Water and Planning to provide detailed practical guidance to the timber industry on how to comply with the precautionary principle, which is an existing requirement,” a spokesperson said.

“The rules for timber harvesting are a mix of very clear and specific requirements, and some broad principles, which are currently open to various interpretations before the courts.”

Brendan Sydes, an environmental lawyer and honorary senior fellow at the University of Melbourne Law School, said that, under the amendments, the government would be allowed to change the details of the rules that VicForests needed to comply with, and also be able to decide if the logging agency had complied with the rules.

“My concern is that this is really intended to avoid third-party scrutiny by environment and community groups as to whether VicForests is complying with logging laws,” he said.

VicForests is currently locked in eight court cases with community environment groups over allegations of illegal logging. If the government’s amendments are passed, it’s likely some of those court cases may not be able to proceed because the law has changed.

In a significant judgement in 2020, the Federal Court found in favour of Friends of Leadbeater’s Possum, ruling that logging by VicForests in areas of habitat vital for critically endangered possums had contravened federal law.

This decision was later overturned on appeal, but the court upheld the original judgement that the logging agency had breached conditions of Victorian environment laws.

A spokesperson for VicForests was unwilling to comment on the eight cases currently before the courts.

“VicForests supports legislative reform and the current process to clarify the Code of Practice for Timber Production, and will operate according to any changes once finalised,” the spokesperson said.

Victorian Greens deputy leader Ellen Sandell said the Labor government was putting the needs of logging interests above those of threatened species.

“VicForests has been taken to court multiple times for illegal logging, but instead of making them obey the law, the Victorian Labor government is instead changing it, so they can get away with more logging,” Ms Sandell said.

Last year VicForests recorded a $4.7 million loss despite being given an $18 million grant by the government. It attributed this financial loss to an unprecedented number of court challenges from community environment groups, and the destruction of timber in the Black Summer bushfires in 2019-2020.

Victorian Government says it is committed to delivering the Victorian Forestry Plan, which includes ending native timber harvesting by 2030 with a reduction in 2024.

A guide to the environment, what’s happening to it, what’s being done about it and what it means for the future. Sign up to our fortnightly Clear Air newsletter here.