Harry Styles has hit back at Candace Owens after her controversial comments about his Vogue cover shoot.

On Wednesday, the 26-year-old singer trolled the conservative commentator, who sparked a lively debate last month after she called Styles cross-dressing an “outright attack” on Western civilization and demanded we “bring back manly men.” 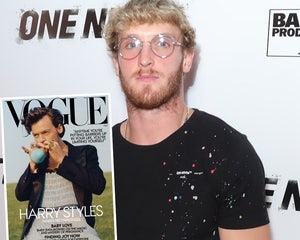 Styles finally addressed Owens’ comments by using her own words against her. Taking to Instagram, the three-time Grammy nominee shared a photo from a new Variety cover story, which featured him rocking a powder blue pantsuit with ruffled sleeves.

The “Watermelon Sugar” singer discussed the topic more in his profile with Variety and defended cross-dressing.

“To not wear [something] because it’s females’ clothing, you shut out a whole world of great clothes,” Styles explained. “And I think what’s exciting about right now is you can wear what you like. It doesn’t have to be X or Y. Those lines are becoming more and more blurred.”

Meanwhile, Owens later responded to Styles’ Instagram shade, claiming his post meant that she has “influence” and had spurred a “global” discussion.

“When people try to tell me I don’t have influence, and then @HarryStyles dedicates an entire post to my tweet,” she tweeted. “I inspire global conversation.”

“#BringBackManlyMen,” she continued, adding a series of laughing emojis.

The political writer went on to share another tweet that featured a behind-the-scenes photo of Styles on the set of the 2017 war drama “Dunkirk.”

“#BBMM,” Owens wrote alongside the pic, also throwing in emojis of both the American and British flags.

Not unlike when she made her initial comments about Styles cross-dressing, Owens received backlash from the One Direction singer’s dedicated fan base, which prompted Owens to engage in a Twitter spat with one angry fan.

In a popular tweet, a verified user called Owens remarks “hateful” and “atrocious” and said her comments are “inspiring violence against gender-nonconforming people.”

“This isn’t something to be proud of, @RealCandaceO,” the fan added. “It isn’t a discussion when people’s safety and lives are put at-risk.”

Owens then called out the user, writing, “The Left is literally trying to claim the expression ‘Bring Back Manly Men’ is an act of violence. You need your head checked, buddy. #bringbackmanlymen”

The user doubled down on their view, while Owens did the same.

“These comments do far more harm than any good imagined to both parties and to our social order. America is the land of the free,” the person tweeted. “The homophobia and the transphobia that comments like yours inspire are dangerously found elsewhere in the world.”

Owens hit back, writing, “Your heterophobia is the reason straight men all across the world are dying.”