Home » Lifestyle » ‘Hazards are many’: Millions found to be at risk from sea level rise

‘Hazards are many’: Millions found to be at risk from sea level rise

Indonesia has been identified as the country with the most land at risk of sea level rise, adding to the threats climate change will pose to Australia’s populous northern neighbour.

New satellite data has found Indonesia has 118,200 square kilometres of land at two metres or less above mean sea level, or an area 14 times larger than previously thought, according to research published Wednesday in the Nature Communications journal. That land, which amounts to about 6.3 per cent of the archipelago, is already home to 17.2 million people. 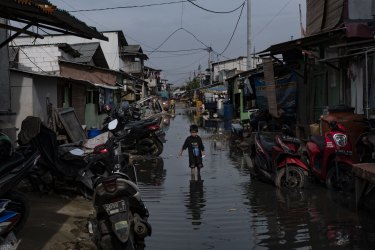 New satellite detection methods have identified 267 million people living at elevations of 2 metres or less above sea level. About two-thirds are located in the tropics, with Indonesia home to the largest population at risk as sea levels rise because of climate change.Credit:Getty Images

Remote-sensing Light Detection and Ranging (LiDAR) pulses detected land around the world that is home to 267 million people living at two metres above sea level or lower, the research found, putting them at flooding risk.

Assuming seas will rise about a metre by 2100 as the climate heats up, those at risk will swell to 410 million even assuming no population increase, with about 72 per cent of them living in the tropics, it said.

“Consequently, whether measured by area, population size or population growth, the burdens of relative sea-level rise are likely to fall [disproportionately] upon developing countries in the tropics that often have limited capacity to adapt,” the paper said.

Aljosja Hooijer and colleagues at Deltares, a Dutch-based research institute, said that while tropical Asia, in particular, was known to have vulnerable coastal and delta regions before, LiDAR allowed much more precise estimates to be made. The work, done to 5-kilometre resolutions, would be refined further to 1-kilometre, he told the Herald and The Age.

“Our new data show coastal lands to be substantially lower than was known before, which will translate into substantially higher flood risk of course,” he said. 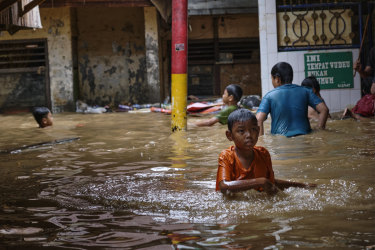 Indonesia faces multiple climate change risks, with sea-level rises just one of them, according to Robert Glasser at the Australian Strategic Policy Institute.Credit:Getty Images

Along with Indonesia, Bangladesh and China had among the largest areas and populations at risk. Australia had about 30,000 square kilometres of land at 2 metres or less above sea level, which was home to about 300,000 people. With one metre of sea level rise, that area would swell to about 48,000 square kilometres, with 800,000 at risk even without population increasing.

Robert Glasser, head of the Australian Strategic Policy Institute’s climate centre and author of a recent report on the rising threat of global warming in the region, said that the Nature paper underestimated the risks because it did not assess the rising population.

“If people are being flooded and flooded over and over again, people tend to move,” Dr Glasser said. “The pressures on places like Indonesia are going to be enormous.”

In his report, Dr Glasser said the wider Southeast Asian region faced “a dangerous constellation of simultaneous climate hazards” that would pose national security issues for Australia quite apart from its own exposure to threats from a warming world.

“Sea-level there is rising four times faster than the global average, driven by climate change and other factors, such as groundwater extraction,” he wrote.

Even so, most analyses treated climate risks as independent, rather than considering how they would likely interact, his report noted. A study of the impact that rising temperatures will have on agricultural productivity, for instance, would typically overlook the compounding impacts of other hazards such as flooding, drought, fires, increases of pests, saltwater inundation, cyclones, migrations of people, and so on.

“The hazards are many and the cascades will affect everything,” Dr Glasser said.

‘Hazards, Are, f, many, millions
Celebrities