Herded like moo cows on the way to market: HENRY DEEDES watches MPs return to Parliament with social distancing

More than half a mile the line snaked back through the Parliamentary Estate. From the Commons chamber it began, out through the cavernous environs of Westminster Hall before spilling out into New Palace Yard.

For three months, the whole of this area had been totally deserted bar the odd armed policeman. Now, at 4pm on a baking first day back from recess, it was suddenly awash with MPs.

This was not a fire drill. And no, it was not the queue for MPs to reclaim their precious expenses. Members were voting on Leader of the House Jacob Rees-Mogg’s decision to do away with remote votes and return to a ‘physical-only’ Commons. In these social distancing times, this is how MPs will now be required to pass laws. Herded like moo cows on the way to market. Goodness what a carry on.

Despite Parliamentary staff’s best efforts, it was not an organised scene. A tinge of chaos hung in the air. Think Stansted airport on August bank holiday, though sans screaming toddlers. Thank goodness.

Some MPs irritably removed their jackets in the sweltering afternoon sun. Others, predictably, decided to capture this unusual moment by taking selfies. Ducking in among them was one Parliament’s men in tights, sword dangling by his side, frantically ensuring they remained two metres apart. 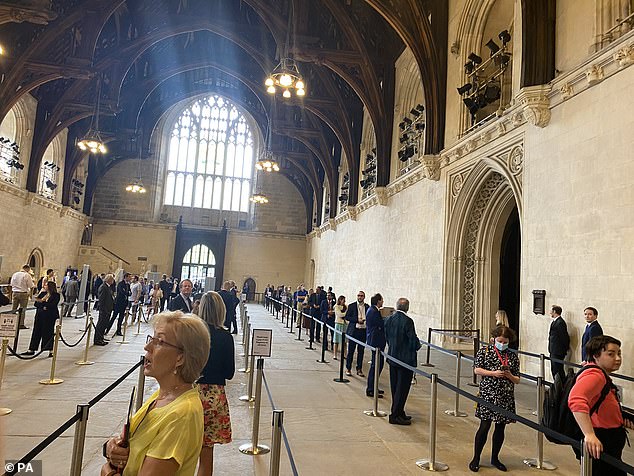 Rank and position bore no priority. Beneath my office window, at the very back of the queue, I saw Sir Keir Starmer patiently hovering on the cobbles. I maintained a watchful look out for the Prime Minister but never saw him arrive.

Meanwhile, the scene inside the chamber was no less barmy. Some members seemed genuinely confused as to how to cast their vote. The poor clerk became really quite terse.

‘Name and how you’re voting, please!’ she cried as they approached the dispatch box quizzically. Speaker Sir Lindsay Hoyle was similarly irked by the slow speed of foot traffic. Dawdlers were met with a yell of ‘Coooome on!’ Some 43 minutes later we were done. Usually a vote takes little over ten.

With technology now in place, which has allowed MPs vote via mobile telephone during lockdown, this is a remarkably analogue move. More pertinently, by scrapping the remote system some elderly MPs currently having to shield are now unable to vote. Needless to say, the debate which preceded the vote was a snippy affair.

Rees-Mogg insisted remote voting has always been a temporary measure. His reasoning was that voting on important legislature demanded the respect of turning up in person. 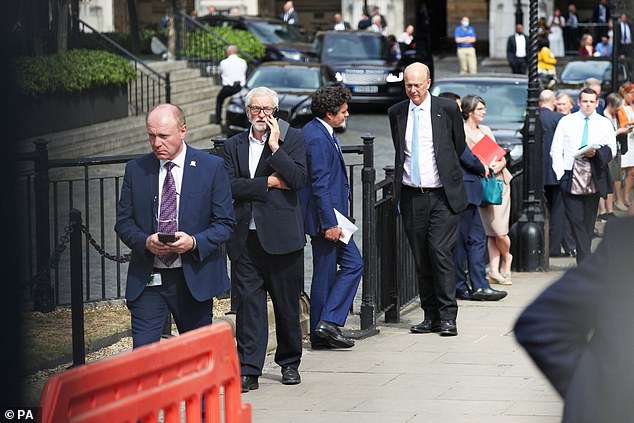 He was disturbed to learn some members had cast their vote during Parliament’s hybrid period while out walking. ‘Voting while having a sunny walk or watching television does democracy an injustice,’ he said, a tad preciously. Mogg’s opposite number Valerie Vaz accused him of ‘staggering arrogance.’ Liz Saville-Roberts (Plaid Cymru, Dwyfor Meirionnydd) said preventing those MPs unable to attend the House from voting was effectively showing their constituents they mattered less.

Caroline Nokes (Con, Romsey & Southampton N) deemed Mogg’s motion discriminatory. Ian Paisley (DUP, N Antrim) complained of the difficulties he and his colleagues had getting to Westminster, due to the paucity of flights from Belfast.

Mogg, whose London home is a short walk from the Commons, was mildly sympathetic to this. He was impressed, too, by SNP Westminster leader Ian Blackford’s ‘commitment to Parliamentary democracy’ after his journey from the Isle of Skye had taken 16 hours. ‘Perhaps he’s a secret unionist!’ shouted a heckler.

Blackford was indignant. ‘This is ludicrous and a waste of our time,’ he fumed, his jowls wobbling with affected fury. When Deputy Speaker Dame Eleanor Laing urged Blackford to hurry his speech along, he refused. ‘Move along!’ went up the cry from the Government benches.

Most surprising moment of the session was unearthed by Chris Bryant (Lab, Rhondda) who, rightly, predicted the queues to vote would be worse than the ones at Alton Towers.

‘Have you ever been to Alton Towers?’ Bryant yelled at the dispatch box. ‘Yes, took my sister Annunziata many years ago,’ Jacob replied. That I would have paid to see.

As for the vote, it passed comfortably. So for the next few months, Parliament’s going to be a right old palaver. 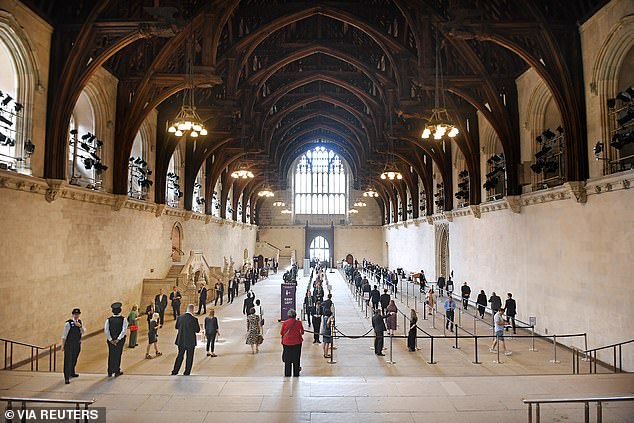 ‘As for the vote, it passed comfortably. So for the next few months, Parliament’s going to be a right old palaver,’ says Henry Deedes

The House of Commons was branded an ‘embarrassing shambles’ yesterday as MPs queued for more than half a mile to take part in a vote.

Critics mocked Westminster for looking more like a theme park as the line stretched outside and around the Parliamentary Estate.

The chaotic scenes came as the Government axed virtual proceedings that had allowed MPs to vote online and take part in debates from home via video link during the coronavirus crisis.

Jacob Rees-Mogg, the Leader of the Commons, insisted that it was the right time to ditch the ‘stop-gap’ measures and require MPs to appear in person.

‘We need proper debate, we need to be back, we need to have a proper full-blooded democracy and that is what we are getting,’ he said. Making the case for why online voting should not be allowed to continue, he added: ‘Voting while enjoying a sunny walk or whilst watching television does democracy an injustice. The solemn decisions we take together affect the lives of millions of people in this country. 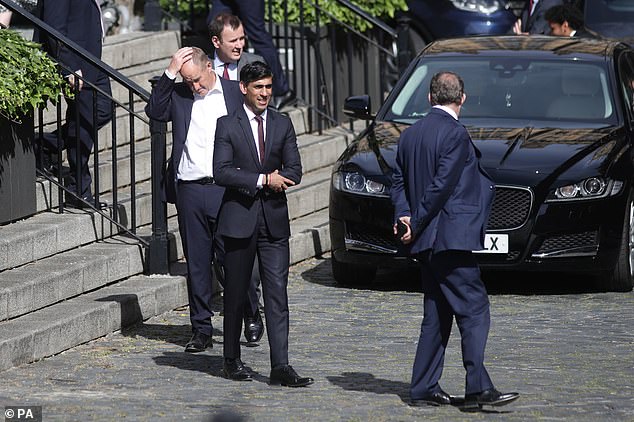 Critics mocked Westminster for looking more like a theme park as the line stretched outside and around the Parliamentary Estate. Pictured: Chancellor Rishi Sunak queues outside the House of Commons to vote

‘We ask members to vote in person for a reason, because it is the heart of what Parliament is about.’

But opponents warned that the move excluded those forced to remain at home because they are shielding due to serious health conditions. As they took part in the first votes since returning to Westminster, MPs formed a single-file line stretching for almost 1,000 yards as they were told to maintain a distance of 6ft – two metres – from each other.

Westminster Hall was jokingly compared to an airport departure lounge as ropes were put out to mark where MPs were to queue. The line, including both ministers and backbenchers, snaked around New Palace Yard outside, running to Portcullis House.

It took an hour and 25 minutes for two votes that would normally take 15 minutes each, despite repeated attempts by Sir Lindsay Hoyle to quicken the pace. The Commons Speaker could be heard telling MPs: ‘Why are we not keeping up? There are other members waiting.’

Labour’s Chris Bryant likened matters to a theme park, joking ‘have you ever been to Alton Towers’ to which Mr Rees-Mogg replied: ‘Indeed, yes I have, I took my sister Annunziata there many years ago.’

Tory former Cabinet minister Karen Bradley, who chairs the procedure committee, moved an amendment to keep remote voting in place, with several Conservative MPs rebelling to support the proposal. But it was defeated by 185 votes to 242 following a 46-minute division. MPs later approved the Government’s motion to allow only voting in person by 261 to 163, a majority of 98. 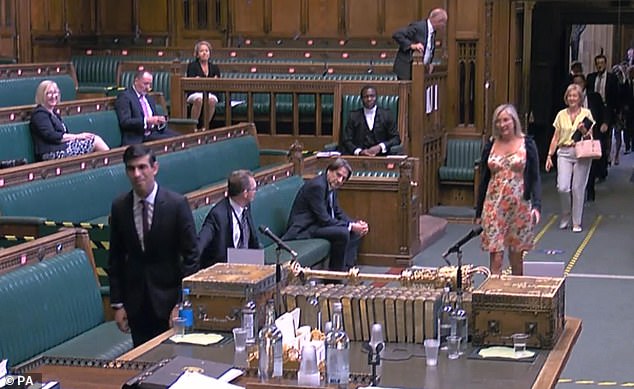 The SNP mocked the creation of a ‘conga line Parliament’, while others questioned whether it was a good use of time.

Nusrat Ghani, a Conservative former minister, tweeted: ‘How very British. We could vote electronically and crack on with business in Parliament or we can stand in queues.’

Tory Michael Fabricant said: ‘Anyone watching the voting live on BBC Parliament would see what an embarrassing shambles it is.’

Labour MP Mark Tami accused the Government of bringing MPs back to Westminster so there were more people to cheer Boris Johnson at Prime Minister’s Questions. He said: ‘This utterly daft voting will put thousands of people – parliamentary staff, MPs, their families and constituents – at greater risk.

‘All because Tories are embarrassed by Boris Johnson’s performance against Keir Starmer without a crowd of backbenchers cheering behind him.’ Kevin Brennan, another Labour MP, joked: ‘This queue is so long I just saw one MP using Google Maps.’

Mr Rees-Mogg said he will table a motion today that would enable MPs unable to attend Parliament on medical grounds to take part in some proceedings. However, they will not be able to take part in votes.

Earlier, Tory MP Robert Halfon, who has cerebral palsy and is shielding, accused the Government of turning him into a ‘parliamentary eunuch’.

The Equality and Human Rights Commission wrote to MPs to raise concern, saying it ‘cannot be right’ to exclude elected representatives.