If you ask New York relat estate agent, JP Smith, what he remembers most about his 2014 honeymoon in Aruba, he'll say the sunsets, but not because of their beauty.

"It was like a photo shoot for some magazine that would never exist," said Smith, 38, and he didn't mean that in a good way. He described the weeklong vacation with his new wife, Natasha Huang Smith, as a "sunset nightmare,""stressful,""cumbersome" and "torturous."

Huang Smith, 34 (pictured in the post above), who works in digital marketing, was attempting to showcase their honeymoon on Instagram. "I had to prove to the world that I was having a great time," she said. And so half of her day was spent shooting, editing, or planning Instagram posts.

Huang Smith is certainly not the only newlywed succumbing to social media pressures. According to the Knot Social Media Survey 2016, 70% of brides post on social media throughout their honeymoon.

The posts can be a nice way to show off honeymoon highlights and keep in contact with family and friends, but they also have the potential to ruin what was supposed to be an intimate trip.

"History suggests the honeymoon began in England in the 19th century when couples would travel the country visiting family and friends who couldn't make it to their ceremony," said Kara Bebell, who owns and operates the Travel Siblings, with her brother, Harlan deBell. (The New York-based company specializes in romantic getaways.)

Then the honeymoon evolved into the first time a couple got any prolonged alone time or to consummate the marriage. The modern honeymoon became more of an opportunity for newlyweds to celebrate alone and reconnect after the stress of a wedding.

In recent years, honeymoons have regressed, Bebell said. "Couples want validation from followers and friends," she said, and oftentimes they do that with photos and hashtags.

Huang Smith said she felt compelled to prove to the world that her honeymoon was as "epic" as her wedding. Before and during the trip, she researched "grammable" hotels, restaurants, and beaches. "For breakfast JP would be like, 'OK, we're going to this place,' and I'd look at the menu before, thinking, 'What will look cute for Instagram?' And I didn't even really want to eat it! Or he'd be like, 'Let's go to this beach,' and I'd be like, 'Eh, I don't know,' because I already looked at photos and thought it didn't look pretty."

I'd look at the menu before, thinking, 'What will look cute for Instagram?' And I didn't even really want to eat it!

Although she noticed her husband was unhappy, she didn't let his mood get between her and a good sunset shot. "He'll say now, 'You dragged me to that beach, you made me stand in the freezing cold water as the sun was going down!' I think he's scarred. It's sad because it was our honeymoon and he remembers me dragging him to all these places."

Social media made his honeymoon "not enjoyable," Smith said. "They didn't really have GPS there so I'm flying around, she's screaming at me because she's going to miss the perfect sunset," he recalled. "So it became less about relaxing and more about taking all the glam shots that all the other Instagrammers are getting. We were never just hanging out on the beach."

They almost separated after that trip, he said. "Not because of the honeymoon alone, but it was pretty bad." 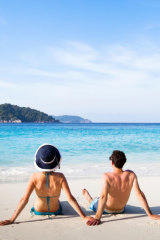 In retrospect, Huang Smith said, "I would have absolutely had a better time on my honeymoon if I wasn't posting as much."

After Huang Smith's trip, she started comparing her Aruba photos with those of other Instagrammers, and her feelings about her honeymoon worsened. "I was flipping through so many posts and thinking my photo wasn't as good as that one, or oh my God, I missed this place," she said.

These types of comparisons are common, according to Gwendolyn Seidman, a social psychologist studying relationships and online behavior and chairwoman of the psychology department at Albright College in Reading, Pennsylvania.

"You see other people posting photos of their great vacations, romantic engagements, and exciting honeymoons, so you compare yourself to them and feel the need to do the same thing yourself," Seidman said.

"When we compare our actual lives, full of ups and downs, to other people's polished social media images, we feel bad," she continued. "You may end up feeling that your honeymoon wasn't that special or that your spouse isn't that romantic after you compare yourself to others."

I was flipping through so many posts and thinking my photo wasn't as good as that one, or oh my God, I missed this place.

It's not just during or after the honeymoon that people feel stress to impress. "The pressure is felt long before the actual trip because we can peek in on others' honeymoons on social media," said Amy Cirbus, a counseling psychologist based in New York and the manager of clinical quality at Talkspace, which has a social media dependency program. "We know where people go and what they do. This has significant influence on couples who then feel the need to have an equally amazing trip."

Social media dependence can lead to unrealistic expectations and, of course, disagreements. "Couples today are seeking validation from their followers instead of talking about what they want with each other," Bebell said, adding, "Social media drives the honeymoon decisions: where they go, what they do, and definitely where they stay."

Rebecca Manning Reid, a 28-year-old freelance writer from London, felt so challenged and unnerved by her peers that she changed her honeymoon plans. She and her husband, Marcus Manning, 39, a contract lawyer, were going to Cornwall, England, after their Sussex wedding. "We love it there,'' she said. "We would have saved money, stayed in a nice cottage, gone on long walks."

It seemed perfect for them — until her friends weighed in.

She grew embarrassed by her plans. "And I started to imagine the photos not looking that good and people seeing them and thinking, 'Such a shame they couldn't afford a better honeymoon,'" she said.

So they went to Italy instead.

"I ended up planning this really stressful trip," Manning Reid said, "because I wanted to go to these fancy hotels, we could only afford to go for a week rather than the two weeks in Cornwall."

The worst part was the apartment they stayed at in Florence. "I booked this really photogenic apartment purely because the photos were beautiful on the website and I thought it would look nice on my social media," she said.

She unknowingly booked an apartment that had no air-conditioning. It was also on the sixth floor of a walk-up. "And the bed was on a mezzanine with a sloping ceiling so neither of us could stand up straight," she said. "We didn't have sex the entire time we were there — three nights — because it was so hot and you couldn't move fully and I was too cross about the apartment.

"If it weren't for social media I would have stuck to the original plan, we would have gone to Cornwall and had a really nice time. And we probably would have had considerably more sex."

Cirbus has also witnessed the pressure to impress translate to dissatisfaction with partners. "It can keep the focus shifted on the outside instead of enjoying rich connection between the couple," she said, and in more extreme cases, "the stress and dedication to getting that perfect post can cause turmoil and tension between the couple."

Smith recalls fighting about the importance of social media during the trip. "At the end of the day it's just trying to make the friends jealous. Why not make your friends jealous by having a great relationship and a great time?"