The national property boom slowed dramatically over November with new data showing the nation’s housing prices had their slowest month of growth since January. 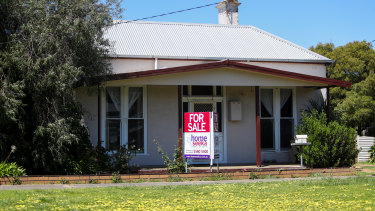 Property prices in regional areas increased 2.2 per cent, double the 1.1 per cent rate across the cities.

“Fixed mortgage rates are rising, higher listings are taking some urgency away from buyers, affordability has become a more substantial barrier to entry and credit is less available,” Mr Lawless said.

Credit assessments were tightened at the start of the month following steps from the Australian Prudential Regulation Authority to stop risky borrowing. The average home buyer’s borrowing capacity fell 5 per cent as a result of the higher interest rate buffers lenders are required to use to assess them.

There has been a significant rise in auction activity and a softening clearance rate in recent weeks.

There has also been an overall surge in homes listed for sale, which Mr Lawless said was a significant factor slowing the market. There was a surge in new listings in November pushing the market to its highest level since 2015.

“We expect inventory levels will continue to normalise into 2022 which should see selling dynamics gradually shift away from vendors, providing buyers with some additional leverage at the negotiation table,” he said.

Sydney and Melbourne have also been affected by affordability pressures and the lack of interstate and overseas migration.

Regional NSW property prices increased 2.4 per cent over the month, with regional Victorian prices up 1.8 per cent.

Regional areas within a commuting distance of a major city, as well as coastal and lifestyle areas, are seeing significant growth. This includes the NSW Southern Highlands and Shoalhaven, the Hunter Valley and the Tasmanian regions of Launceston and the North East.