How navy ‘girls’ helped turn tide in Battle of the Atlantic

History
A Game of Birds and Wolves
Simon Parkin
Spectre, $32.99

Years after World War II, Winston Churchill wrote, describing his experience as prime minister during the conflict, that "the only time I was genuinely afraid was during the Battle of the Atlantic".

Unlike the far more visible, filmable and immediate Blitz and the Battle of Britain, it was the desperate struggle to keep Britain supplied with food and fuel during the first three years of the war that was going to decide the issue, and Churchill knew it. 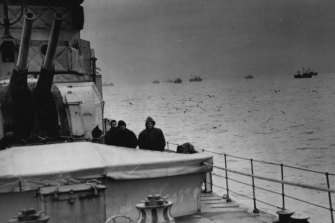 A convoy reaches harbour in 1942 after a nerve-racking Atlantic crossing.Credit:Fox Photos

If Adolf Hitler – obsessed as he was with conquering Russia after Hermann Goering failed to bomb Britain out of the war – had listened to his short-lived successor as fuehrer, Admiral Karl Doenitz, as he screamed for more and better U-boats to be built, the outcome could have been very different.
As it was, it was "a damn close-run thing", as the Duke of Wellington remarked after Waterloo.

For more than a century Britain had been an exporter of manufactured goods. But apart from in coal, it was not self-sufficient in any of the raw materials an industrial society needs to survive.
Churchill had no oil. The country’s farms could not feed the population. Everything from cotton to kerosene was imported and had been for decades, but when you had a vast empire shipping in millions of tons of whatever you needed, this didn’t present a problem.

But cut off the sea lanes, and Britain would be shown to be what it was – a small island in the North Atlantic with very little in the larder, at war with an enemy determined to starve its people into submission. 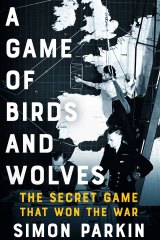 Simon Parkin’s story of the waging of the Battle of the Atlantic (as it was to be described by historians and writers after the event, hence being less prominent in the historical rear-view mirror than the air war, or even Waterloo) is a tale of clinical tactical thinking and the ghastly consequences of miscalculation.

From 1940 until the Germans abandoned the effort to strangle Britain in late 1943, the carnage on the sea between North America and the British Isles was staggering.

Parkin gives us the numbers. "Two-thousand-six-hundred-and-three merchant ships, and 175 of the convoys escorting naval vessels were sunk in the Battle of the Atlantic, the longest continuous military campaign of the Second World War. More than 30,000 merchant seamen and more than 6000 Royal Navy sailors died in the Atlantic during the war, many following attacks by U-boats."

Being torpedoed by a U-boat and finding oneself without hope of rescue, waiting to drown in icy water, was a grisly business, but by the same token the life of a German submariner was a short and claustrophobic nightmare.

Parkin points out that "life insurance companies in neutral countries estimated the average life of a U-boat sailor to be 50 days. This was not the hyperbole of propaganda. Of the 39,000 men who went to sea in U-boats during the Second World War, 70 per cent were killed in action. By contrast, only 6 per cent of those who fought in the British Army died in combat. In the early 1940s you were more likely to die on a U-boat than on any other mode of transport in existence." 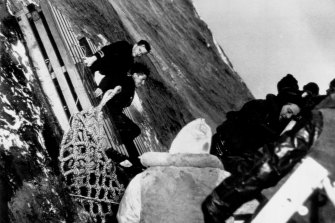 Two survivors of a torpedoed merchant ship wait to be taken on board a US coastguard ship in May 1943.Credit:AP

But the war at (and under) sea, horrific and merciless as it was, serves here as the context for the central narrative of Parkin’s fascinating history of WATU, and the women who worked there.

WATU was the Western Approaches Tactical Unit, and given that by 1940 any able-bodied military man was required to serve on a ship, fly a plane or fire a rifle, Britain had to call upon women to fill the gaps. While the crucial role of women in the decoding rooms of Bletchley Park and plotting incoming Luftwaffe raids from radar data is better known, the Wrens (Women’s Royal Naval Service) were critical in developing WATU’s skills in defeating Doenitz’s "wolfpack" strategy of annihilating the crucial supply convoys.

In their headquarters in Derby House, Liverpool, huge maps of the North Atlantic were hung from walls and laid out on floors, showing both Allied convoys and known U-boat positions in real time, but just as importantly to also test defensive tactics, used in what essentially were war games.
The Wrens soon moved from being young ladies pushing around wooden toy boats and U-boat tokens on charts to experts at what did and didn’t work at sea.

Once it had been realised that the German aces were attacking from within the protective escorts of convoys rather than fighting their way through the destroyers first, it was the Wrens who worked out how to counter them.

The result of their research and experience was a week-long training course in convoy tactics for battle-hardened commanders, many of whom resented being told how to wage war in the waters off Iceland by "a mere slip of a girl", as one of them put it.

But as the games unfolded most of them came around, including destroyer captain Bob Whitney, who had sunk three U-boats himself, and whose model ship was saved from disaster on the game board after he made a suicidal move, prompting a young Wren to say, "No, sir. I don’t think you should do that."

In 1942 Donald Macintyre, a captain who had captured U-boat ace Otto Kretschmer the year before, wrote, "These girls became so experienced in the tactics of convoy battle that they were able to save many a salt-encrusted sea-dog from making the errors which would have inevitably led to disaster for their convoys of model ships."

In the end the Battle of the Atlantic, and the war, were won. But for many of the Wrens there was a bittersweet tang to victory, and their return to civilian life.

"The end of the war was a blow in lots of ways," Parkin quotes Peggy Hill, a Wren based at Swansea naval base. "Everybody felt the same. It was the end of a completely different way of living, like coming back to earth again. The missing went on for years."

Pat Sheil is the co-author, with Peter Hoysted, of The Fine Cotton Fiasco.