How to fill the Bridgerton-shaped hole in your life

It's raunchy, colourful and funny. But most of all, it's bingeable. Very, very bingeable.

The numbers don't lie when it comes to Netflix's hottest new period drama Bridgerton. The show – which follows the story of an aristocratic family in 19th century London – has been the streaming giant's second most popular offering in Australia for seven days in a row and reached top spot on Wednesday. And according to Netflix's internal projections, more than 63 million households around the world will polish-off the series by the end of the month.

Period drama is definitely having something of a Renaissance (or should we say, Regency?). But for all the silk, feathers and titillation, there are still messages about inclusiveness, diversity and the double standard that women face in society.

With that in mind, dear reader, here are seven other well-educated period dramas you may wish to court. Just don't tell Lady Whistledown. 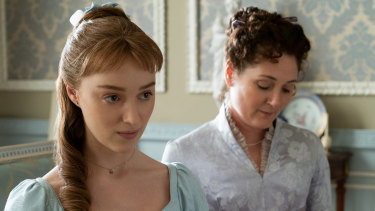 Oscar-nominated rising star Hailee Steinfeld plays poet Emily Dickinson in this historical comedy-drama. As with Bridgerton, relationships clash with the expectations of 19th century society (in this case, the protagonist is in love with her best friend and brother's fiancee. Awkward). The show also features familiar faces including Jane Krakowski and standup comedian John Mulaney. Oh, and rapper Wiz Khalifa plays death personified. Fun. A second season is set to be released on Apple TV in a few days. 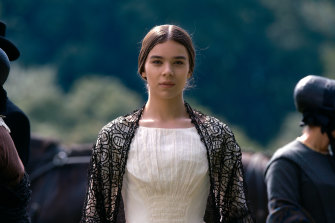 This show dramatises the fascinating story of real-life landowner and industrialist Anne Lister, who documented her same-sex relationships in a diary that was mostly written in secret code. It's set in 1832 Yorkshire, placing it in a similar time period to Bridgerton. And like Netflix's hit series, this is a period drama that's far from stuffy. In fact it's very clever and self-aware. The show is a collaboration between HBO and the BBC and is available in Australia on Foxtel. Filming for season two has been delayed due to COVID-19 but a brand-new batch of episodes should land sometime this year.

Set in 18th century London, this show is also about women trying to forge their own path in a society that is incredibly strict, rigid and with few opportunities for women without money. While Bridgerton explores marriage, this series considers another means through which women in Georgian England could advance their economic opportunities: sex work. Queue savvy businesswomen, rich clientele, religious moralists and police raids. It goes without saying, but this show is rather raunchy. Available on Stan (Nine, the owner of this masthead, is also the owner of Stan). 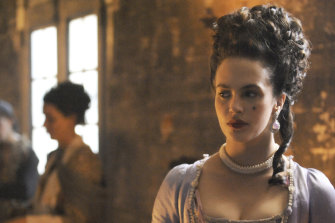 Ah, the 1800s. So many secrets. So many scandals. And yet, this is a show even Lady Whistledown would be proud of. As with Bridgerton, it's based on a bestselling novel. But unlike Bridgerton, it's a bit shorter – coming in at six episodes rather than eight (it's available on Binge). Perfect for those who want another hit of period drama but don't want to develop bedsores before the end of the summer holidays. Oh, and if incase you needed more convincing, Belgravia is the brainchild of Downtown Abbey creator Julian Fellowes. 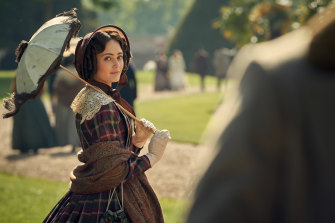 Ella Purnell in a scene from Julian Fellowes’ show Belgravia, which is set in the early 1800s.Credit:BBC First

The Great is set in the 1800s, the same century as Bridgerton. But instead of Regency Era England we have Tsarist Russia. Leads Elle Fanning and Nicholas Hoult are convincing and laugh-out-loud funny in this absurdist comedy-drama. However, Perth-born Belinda Bromilow, who plays quirky Aunt Elizabeth, is by far the standout. The show also happens to be the brainchild of Australian film and television writer Tony McNamara, so you know it's good. It's available on Stan.

Before she was Queen Elizabeth II on the small screen, Olivia Colman played Queen Anne on the big screen. And Oscars don't lie. The British star is riveting in this 2018 black comedy. The film is set in 1711 – about 100 years before the fictionalised events of Bridgerton – but it still manages to serve-up the same dose of sex, humour and courtly intrigue. Turns out England has always been raunchy – doesn't matter if it was the Georgian era or the Stuart period. At two hours, the film is also a good length for those who only have a weekend afternoon to spare and not several nights to spend on another TV franchise. 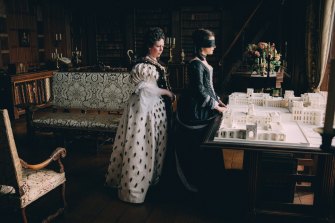 Olivia Colman and Rachel Weisz in The Favourite.Credit:Atsushi Nishijima

OK, so this isn't a film or TV show, but these books are the closest thing you'll get to an extended Bridgerton universe. In 2016, romance novelist Julia Quinn returned to the world of her most popular series with the release of Because of Miss Bridgerton. The book is set a generation before the events of Bridgerton. But this time the focus is on the aristocratic Rokesby family, who are the Bridgertons' friends and neighbours. But don't worry – you'll still catch some familiar names. They just might be wearing leading strings.

Find out the next TV shows, streaming series and movies to add to your must-sees. Sign up to get it every Thursday.

Bridgerton-sha, Fill, How, the, to
Celebrities