How to Help Koalas, Evacuees, and Firefighters as Australia’s “Apocalyptic” Fires Worsen

Australia is facing a crisis right now after the worst season of fires in the country’s entire history. The New York Times, the Washington Post, and The Guardian all report that the fires are getting worse, as firefighters warn people that they might need to abandon entire towns in order to flee safely. Ecologists at the University of Sydney are estimating that almost half a billion mammals, birds, and reptiles have died in the fires already.

Fire danger is increased by strong winds expected to hit this weekend, and all this has led to mass evacuations and astonishing social media posts like these:

The crew from Fire and Rescue NSW Station 509 Wyoming recorded this video showing the moment their truck was overrun by the bushfire burning South of Nowra. The crew was forced to shelter in their truck as the fire front passed through. #NSWFires #ProtectTheIrreplaceable pic.twitter.com/Hb0yVrefi9

The defining image for our next decade as we enter a “new normal” of climate change. Thanks Allison Marion for sharing your photo. Hoping your family and loved ones are safe and unharmed. #MallacootaFires #Mallacoota #bushfirecrisis #ClimateEmergency @ScottMorrisonMP pic.twitter.com/RW3GnGkfFq

As bleak as this seems, there are ways you can help the rescue and firefighting efforts from your couch. Let’s break down how.

First of all, what’s happening and what caused it?

There is a stretch of fires burning in Australia right now, mostly along the eastern and southern coasts. This is where most Australian people live. FOX now reports that nearly 15 million acres have burned. (For reference, the 2019 Amazon rainforest fires that caused international outcry spanned 2.3 million acres.)

Australia typically does have a “fire season,” but this is unusually brutal and experts are extremely concerned. The New York Times reports that the fires are worse this year because of a combo of “record-breaking heat, drought, and high wind conditions.” The Australian government confirmed that 2019 was the hottest and driest year ever on record. The Climate Council (an independent community-funded climate org) also says these bushfire conditions are worse, are more dangerous, and span longer than before because of climate change. Even if you don’t live in Australia, you could consider contacting your elected officials about climate change in response to this.

As of Friday, this is what a macro view of the impacted areas looks like, according to a fire map from the government of Australia’s geoscience website: 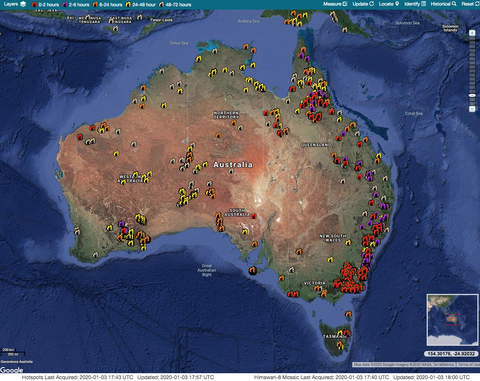 The fires started sparking back in September, but they’ve gotten particularly bad over the past few days, with experts warning that they will only worsen. Right now, dozens of people are missing and at least 19 have been killed because of the fires.

Okay, how can I help firefighters stop the blazes?

Because the fires are spreading quickly, many volunteer firefighters in Australia have jumped into action and currently outnumber full-time fighters. Unfortunately, reports say some have been working more than 100 days without compensation because of it.

“A big issue with the volunteer service is how long they can continue to do this as the season stretches into weeks and months,” New South Wales (NSW) Rural Fire Service volunteer Peter Holding explained to ABC. 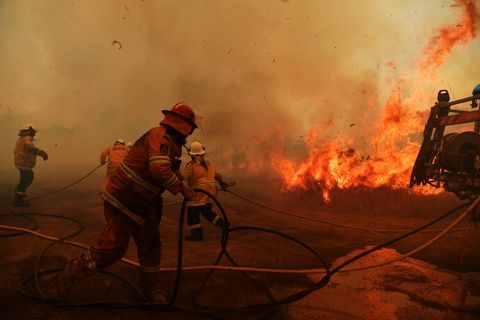 The NSW Rural Fire Service is now accepting donations on its website to help offset this.

Additionally, the NSW Rural Fire Service has set up a donation portal for the families of Samuel McPaul, Geoffrey Keaton, and Andrew O’Dwyer, who were volunteer firefighters killed in action this season.

What about evacuees and fire victims?

There are plenty of ways to also help those who have had to flee their homes and those who were injured in the Australian fires.

The Australian Red Cross is accepting donations that go toward bushfire victim recovery. It’s also collecting clothing and “small homewares,” which can be donated to Red Cross shops.

If you live in the area, you could volunteer with Red Cross and be sent as part of its emergency response.

Otherwise, GIVIT is an organization that lists things evacuees are asking for specifically and helps donors find people who need exactly what they’re offering.

According to CNN, the St. Vincent de Paul Society Australia is also a way to donate to evacuated families so they can cover their bills and rebuild away from home.

How can I help the animals and wildlife in Australia?

With ecologists estimating that half a billion animals are now dead, helping the remaining Australian wildlife should be a top priority for everyone.

Koalas are uniquely at risk during these kind of bushfires. While kangaroos and other native Australian animals can move quickly and escape more easily, koalas are slower. Because of this, they are dying en masse. According to Newsweek, experts estimate 8,000 koalas in New South Wales alone have died in this season’s fires because they could not escape.

Even koalas who manage to get away from the fires can suffer serious injuries. 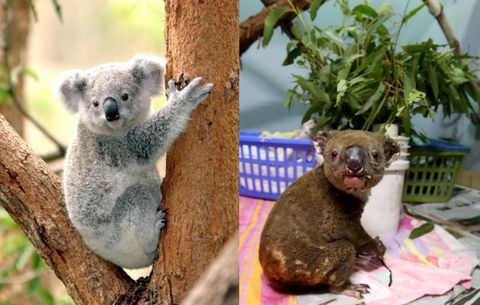 To help the animals and wildlife more generally, including kangaroos, pets fleeing, and native fauna, here are a couple of other options:

If you live in Australia, consider registering in the Red Cross portal.

If you live in the area, you should register yourself as “safe” using the Australian Red Cross’s portal. You can also find friends who have done the same to check on those in your life who might be affected.

Evacuees, help, How, Koalas, to
Celebrities