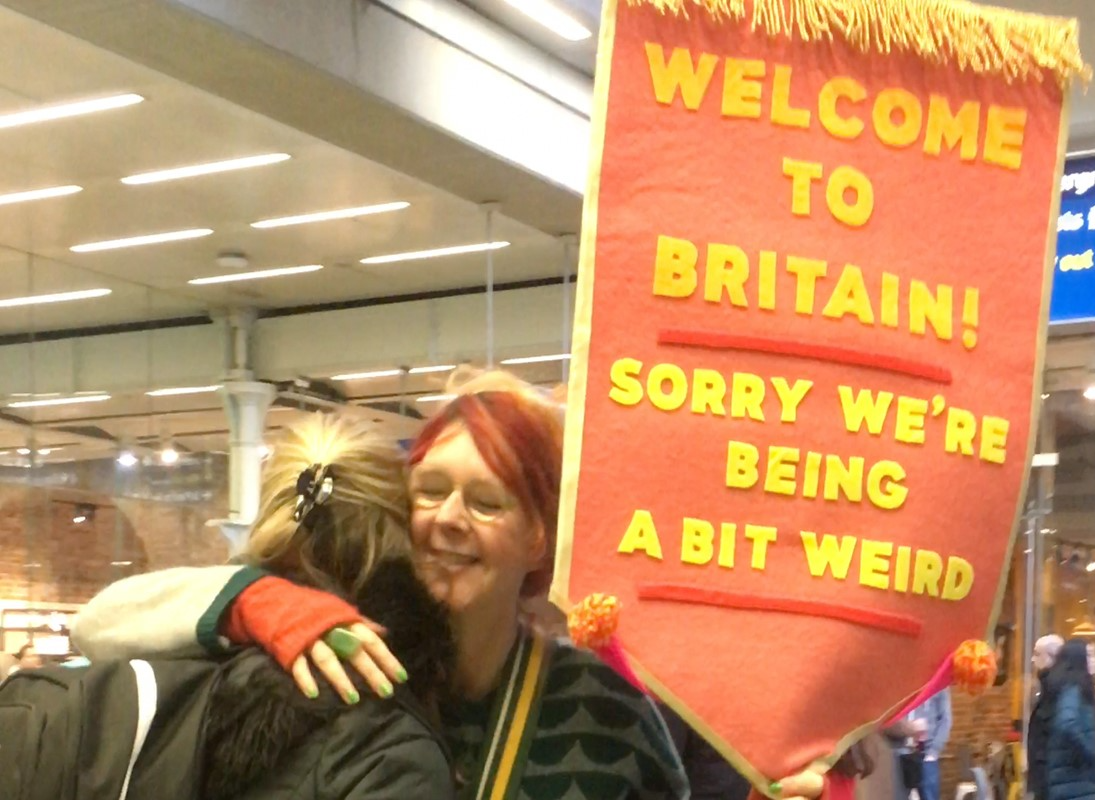 ‘Welcome to Britain. Sorry we’re being a bit weird.’

Two years ago, I found myself standing next to this banner outside Eurostar’s arrival entrance at St Pancras station, with a bunch of pastries.

The sign on my trolley read: ‘How very nice of you to come. Cake?’

My friend and I welcomed guests from Europe into our country, telling them to make themselves at home and assuring them that we were delighted they’d come.

We gave out sponge cakes and hugs, fighting back against the insolence of the Brexit negotiations with icing sugar and warmth. It was our way of preventing being misrepresented by the bad manners of our loutish government.

The reaction was wonderful, from the enchantment of travellers entering the UK that day to the enthusiasm of those picking up the story online. People from both sides of the Brexit fence, united in their shame at our countries’ unneighbourly manners, rallied behind our efforts of hospitality and urged us on.

It was then that my sense of powerlessness evaporated and I realised I needed to keep protesting against irksome issues using radical congeniality. So ever since, I have been politely protesting against everything from checkout machines to Black Friday with humour and fun.

Recently, I began a crusade against the language that society uses to describe older women. Older men get to be silver foxes and bachelors, while women are branded crones, spinsters, dragons, frumps, matrons, hags, bints, fish wives, harridans and battle axes. The list is long and pejorative.

I wanted to reclaim the words, to make them enjoyable and celebratory. So I turned myself into a human billboard and printed these words over my own clothes. I shared photos of myself proudly on Instagram and Facebook and the response was a delight.

Women raced forward to become ‘Hag of the Day’ and many wonderful images were shared of happy hags embracing their cronedom. The Tate Modern even arranged a fashion show with an over-50s theme, although this sadly had to be cancelled due to coronavirus.

There’s a particularly important role for the polite protester right now, spreading happiness at a time when the news causes such burning outrage.

When Trump came to the UK, I wanted to join in the protests but couldn’t think of a banner slogan that didn’t get me worked up. So I side-stepped the problem and went on the march by myself the day before, with a placard that said, ‘I can’t make the march tomorrow. Could someone photoshop me in?’

This led to a blizzard of funny images on social media, showing me not only leading the march but popping up everywhere the president went. It was even picked up by BBC News. A funny story on a day of widespread division and fury.

Then, when the pandemic arrived, bringing uncertainty and struggle, it offered me a new way to communicate happy messages, with face masks becoming my billboards.

It seemed necessary to make the threatening and unfamiliar sight of a half-hidden face as comic and reassuring as possible, so I spent the first lockdown printing hundreds of daft personalised masks.

When the large high street chains started to reopen, I knew I’d have to find a fun way out of the anxiety I felt about our return to ‘normal’, and the reemergence of our consumerist, materialistic ways, post-lockdown.

So, the night before Oxford Street flung its doors back open, I went around with a roll of ‘wet paint’ tape and stuck it over the shop doors.

At the very least it would buy the planet an extra few minutes of peace while shoppers tried to negotiate opening a door they couldn’t touch. It was a small gesture but it made me and a few thousand others laugh at a time when we were most despairing.

The way I see it, the world is dying while greedy people ignore vital facts about sustainability and destruction. Capitalism presses on while division and anger proliferate. These issues are being met with a lot of fear.

I’m fighting back with fun, because absurdity is the most serious weapon I have. If I can make people laugh about the things that terrify them, I’m doing my bit to add to the good energy in the world.

Currently, I’m creating word wreaths of bereavement for small independent businesses that have had to close over the last year, to be laid outside their premises. I very much hope to put the ‘fun’ into ‘funeral’.

And I’ll soon be launching The Clothing Hospital. This is a drive to resuscitate the clothes we already have and use words and statements to turn them into totally unique and relevant pieces.

I hope to spend the summer touring the country converting people’s old garb into human signage.

If the last few years have taught us anything, it’s that everyone is making it up as they go along and there’s more than one way to make a difference. So I’ll continue to fight power with the playful – one pastry at a time.