Home » Lifestyle » If a disability carer is hurt at work, who is responsible?

If a disability carer is hurt at work, who is responsible?

A quirk in Australia’s workplace laws means people with a disability and their families who hire independent contractors to help with their daily needs may end up having obligations under work health and safety laws, backed by steep fines.

Failing to meet work health and safety duties can come with penalties ranging into the tens of thousands of dollars if someone gets hurt, but whether they apply to individual clients of the National Disability Insurance Scheme remains unclear. 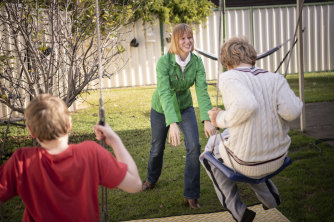 Briana Blackett plays with her two sons, who have autism, in their backyard.Credit:Wolter Peeters

A Labor-Greens majority Senate inquiry into job security recommended last month that the government clarify the law on the area because of the emergence and growth of new platforms like Mable that do not employ staff directly, unlike a regular business.

Mable instead connects NDIS clients and elderly Australians to about 11,000 providers in much the same way a newspaper job board would, though it also takes a cut of the fees exchanged between the two.

Briana Blackett is the mother and full-time carer for her two sons, who have autism and have been part of the NDIS since 2017, and is unusually aware of industrial law because of her background as a consultant to an employer group. She considered Mable but instead opted for another provider that employs staff called Hireup.

Even with her background, she’s unsure whether she would come under the umbrella of a “person conducting a business or undertaking”, which is the test used to work out if someone owes work health and safety duties. “I don’t want to be a workplace, I just want to be their parent,” Ms Blackett said.

University of Sydney labour law Professor Shae McCrystal said it was possible that, when workers are hired through online platforms and operate as independent contractors, the person with a disability may end up under the category of someone running an “undertaking” rather than a job board like Mable.

Mable believes the care providers who use its platforms are responsible for managing the health and safety duties but its chief executive, Peter Scutt, said it arranges insurance for them and also delivers training.

He said if the federal government were to regulate across the existing array of state and territory workplace laws that govern workplace health and safety it could create more complexity.

“Mable believes that the existing legislative frameworks in each jurisdiction currently cope effectively with these obligations and also notes that under the current legislation these obligations do not always attach themselves to a particular work status such as employment,” Mr Scutt said.

By contrast, the inquiry chaired by Labor Senator Tony Sheldon urged the government to make clear that individual participants are not responsible and deem platforms to have the duties.

A spokeswoman for Safe Work Australia did not directly answer questions about whether NDIS clients may end up having workplace duties, saying it was a matter for the federal government.

The Attorney-General’s Department, which has responsibility for industrial relations, did not respond to a request for comment by deadline.

a, carer, disability, hurt, If, Is
Celebrities