A woman is on such good terms with her ex, that not only did she introduce him to his new girlfriend – but he’s best friends with her ex-husband, and the group also spend the holidays together.

Mary McDaniel and Nathan Drumm, from Muncie, Indiana, broke up in 2019 and first struggled to get along – but decided to rekindle their friendship for the sake of their son.

The duo co-parent their four-year-old, Silas, together, after gradually rebuilding their dynamic through play dates. The mother-of-tree says her former partner now comes over on ‘most days’.

She even set Nathan, 29, up with her old school friend Shayla – and gives the pair relationship advice, even going so far as to offer his new lover guidance on lingerie. 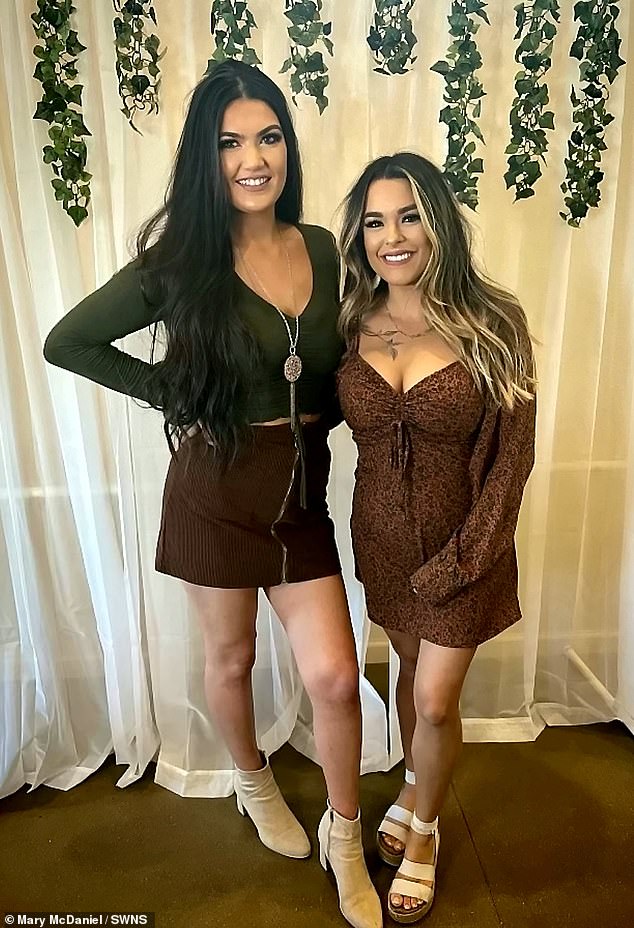 Mary, 27, explained that a healthy relationship with her ex was important because she grew up with divorced parents who weren’t on good terms, and didn’t want her children to go through the same thing.

‘Mary and I talk about pretty much everything,’ Nathan revealed. ‘There is nothing off limits. We grew up together and got together young, so we’ve known each other practically our whole lives.’

Nathan has been dating his new girlfriend, 26, for three months now, and the couple often spend time with Mary – who said ‘they’ll all come round for Christmas and Easter and things like that’.

‘It’s great that we can all get along and be friends. We talk about everything,’ she added. ‘The other day Shayla showed me this lingerie outfit she was thinking of wearing for when Nathan and I was like, “Yes wear that”.’ 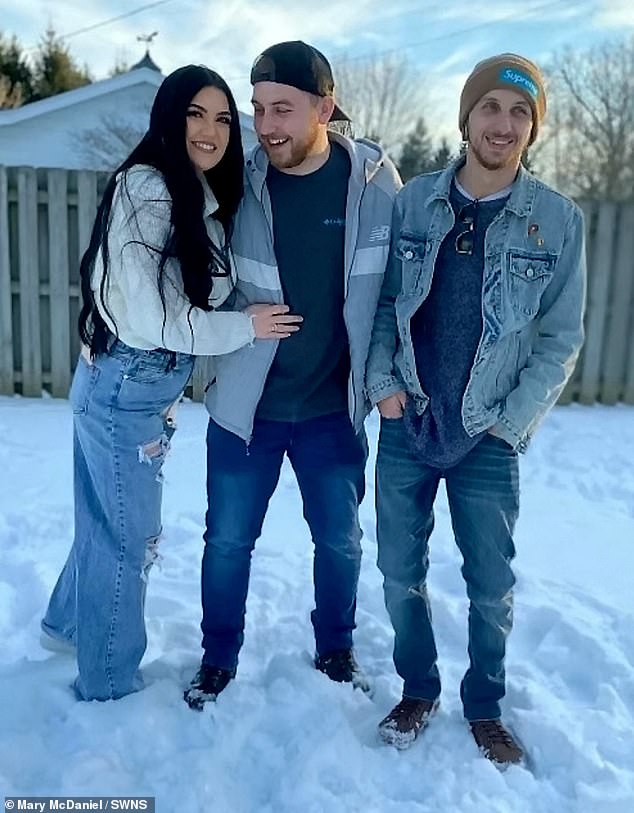 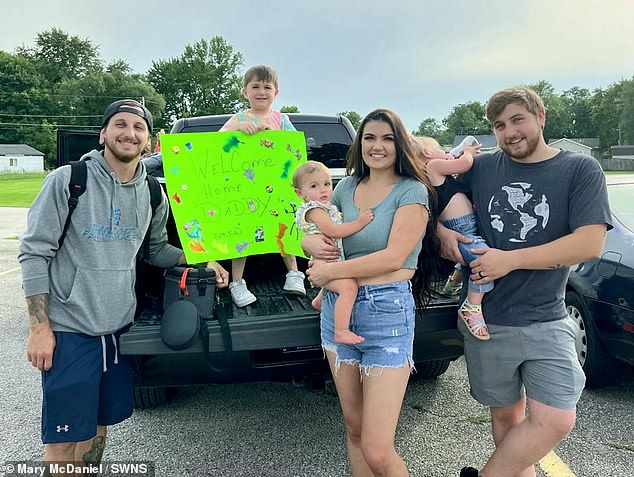 Mary (pictured) married Josh (right) – a sprinkler fitter – in 2020 and the pair had Jovie, two, and Story, one, (both pictured) together. The pair split up in 2022 but hope to co-parent like she and Nathan (left) do with Silas (second left) 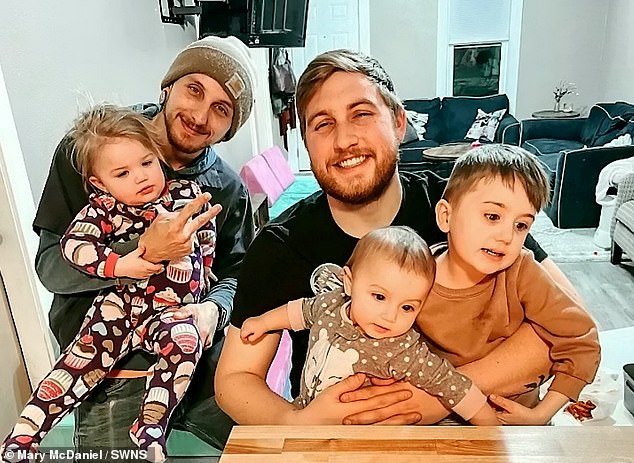 She admitted that a lot of people probably won’t think that’s ‘normal’.

To add to the unusual friendship group – Nathan has also befriended Mary’s ex-husband.

The stay at home mother married Josh  – a sprinkler fitter – in 2020 and the pair had Jovie, two, and Story, one, together.

They separated in August this year, but there’s no love lost between the duo, who continue to co-parent their children and all get along.

Josh explained that at first he and Nathan ‘didn’t really get on’. 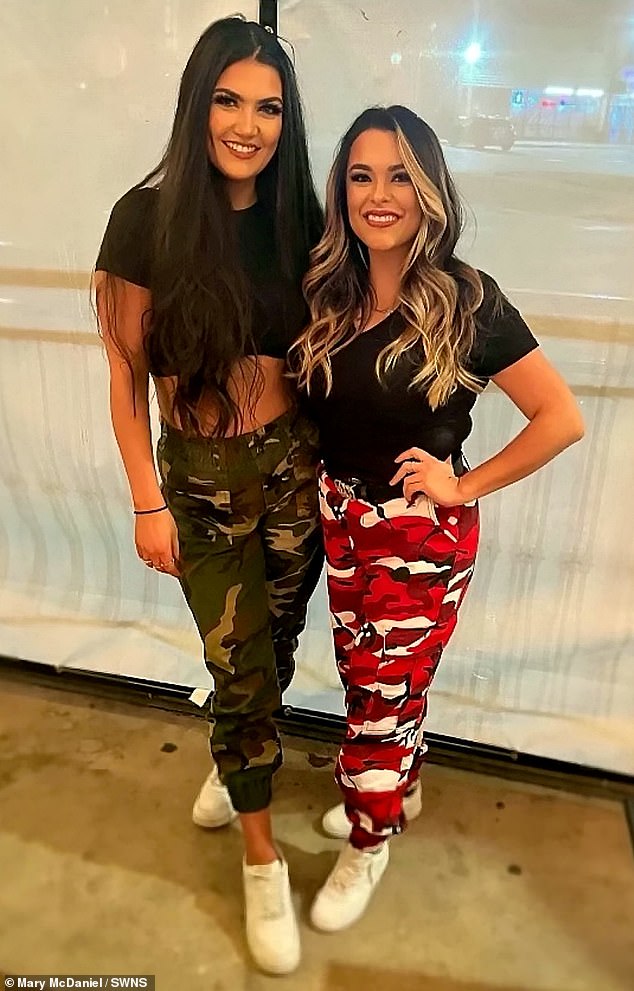 Mary (pictured with Shayla) has also found support systems in all the different people around her as a result, explaining that she’s ‘best friends’ with Nathan’s new girlfriend

‘It wasn’t all rainbows and butterflies,’ he admitted. ‘Now we hang out with the kids together.’

He and Mary are adjusting to their new dynamic following the recent separation – but ‘hope to co parent like her and Nathan do’.

‘We’ve discussed me coming round for the kids to wake up on Christmas morning,’ he said.

Speaking on her unconventional approach to exes, Mary said she didn’t want Silas to deal with the tensions between separated parents. 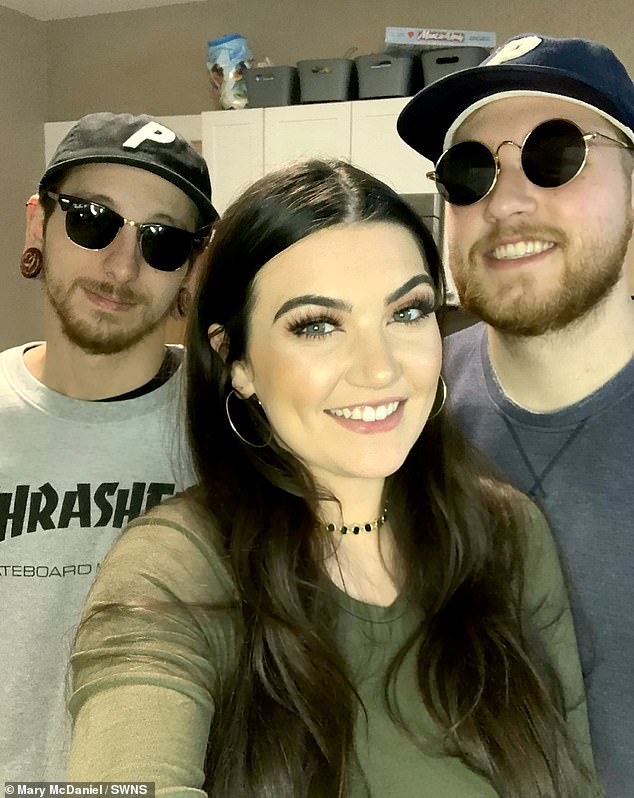 Speaking on her unconventional approach to exes, Mary (pictured with Nathan and Josh) said she didn’t want Silas to deal with the tensions between separated parents

‘Nathan will come over and stay the night on Christmas Eve, so Silas has us both when he wakes up on Christmas Day,’ she said. ‘We’re not sure what we will do this year, we might go over to Shayla’s but we haven’t decided.’

Mary has also found support systems in all the different people around her as a result, explaining that she’s ‘best friends’ with Nathan’s new girlfriend.

‘We knew each other from school and Nathan saw her and thought she was cute,’ she said. ‘So, I set them up.

‘Shayla and I are great friends too and go for dinners or she comes round to help with the kids.

Shayla admitted that the dynamic was ‘kind of weird’ for her at first.

‘In past relationships with guys the ex would always treat me like garbage so it took a while to adjust,’ she said. ‘It was hard for me to give them all my trust.’

But she added being vocal about her insecurities helped her – and ‘now it feels like a family’.