Mr Maher tendered his resignation in a letter to members on Tuesday, saying his decision followed the division unanimously supporting resolutions condemning those who undermined the leadership of former national secretary Michael O’Connor, who resigned earlier this month. 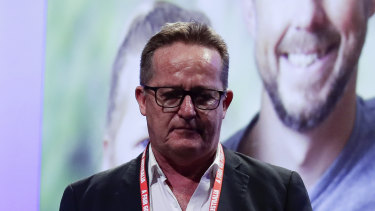 Tony Maher, head of the CFMMEU’s mining and energy division, says the union has “become impossibly divided and dysfunctional with no repair in sight”.Credit:Alex Ellinghausen

He announced the mining and energy division would withdraw its involvement in CFMMEU forums and activities and operate as an autonomous union in future.

"The current state of the union does not reflect the spirit of solidarity, consensus and shared vision that has been cultivated over the past decade. Rather, the CFMMEU has become impossibly divided and dysfunctional with no repair in sight," he wrote.

The move follows a 12-month war of attrition that has split the union and weakened a crucial Labor support base following ongoing disputes with Victorian construction division boss John Setka.

The dispute began around August last year when Mr Setka started encouraging members of the manufacturing division in Victoria to resign and join the construction division instead.

Mr Setka resigned from the Labor Party and withdrew his appeal against a Supreme Court decision permitting his expulsion last year after he pleaded guilty to harassing his wife.

Mr Maher, who has been part of the national leadership team since 1993, told members there was no benefit in continuing in a national leadership role when the biggest division had decided to "simply use its numbers to bully and steamroll smaller divisions".

"I have worked alongside leaders like Michael O'Connor, who is the best national secretary we've ever had, to build a strong and cohesive national union to represent our combined membership," Mr Maher wrote.

The CFMMEU has about 65,000 members in construction, 9000 in manufacturing, 25,000 in mining and 12,000 in maritime after the merger with the Maritime Union of Australia two years ago.

The mining and energy division represents workers mainly in coal mining and also in metalliferous mining, coal ports, power stations, oil refineries and other parts of the oil and gas production chain.