DR RAKIB EHSAN: The next time a pious liberal castigates the Rwanda deal, remind them of the inconvenient truth about the EU’s hell holes for migrants

Seldom has a government policy invited such howls of protest from the liberal establishment as the Rwanda deal.

At the 11th hour, a plane carrying a handful of migrants bound for the East African country remained rooted to the tarmac on Tuesday night. A Strasbourg judge’s intervention on human rights grounds meant the flight never left Britain, in defiance of both a UK High Court and Supreme Court ruling that the plane could take off.

The policy was ‘the opposite of the nature of God’ lectured the Archbishop of Canterbury.

‘Unethical’ and ‘un-British’ cried Shadow Culture Secretary Lucy Powell, one of many Labour frontbenchers publicly kissing the badge of liberalism.

The Home Secretary Priti Patel’s move was ‘all wrong’, criticised the UN High Commissioner for Refugees Filippo Grandi, running ‘contrary to any notion of responsibility and international responsibility-sharing’. But the level of opprobrium heaped by Left-wing, EU-loving politicians and human rights lawyers is breathtaking in its hypocrisy.

Imagine a cell so thick with people there’s hardly anywhere to sit. A cell lit by a fluorescent tube all night. A cell whose only source of natural light is from a small grille in the door. A cell where inmates fight over the chance to sleep under the shower as it’s the only place of ventilation.

Critics of the UK policy might think this to be the fate of migrants bound for Rwanda.

But it isn’t anything like the breezy, bright, newly renovated hostel accommodation in Kigali, the country’s capital, arranged by the Home Office.

This awful place I have just described is the Al-Mabani detention centre in Libya. And it’s the EU’s inconvenient truth.

The centre is one of many that the EU helps finance across the war-torn country that detains migrants, stopping them from crossing into Europe. 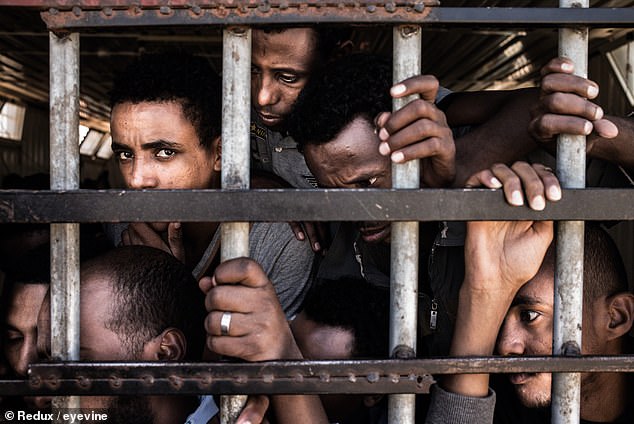 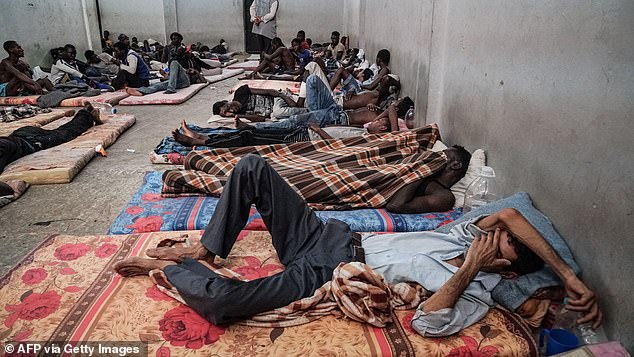 Brussels won’t bring these migrants to facilities in member states. It much prefers the issue be dealt with at arm’s length, beyond its borders.

And this particularly horrific centre reaches appalling levels of inhumanity. Beatings were rife, according to the New Yorker magazine which interviewed migrants unfortunate enough to be picked up in the Mediterranean and thrown into its bowels.

Guards would strike prisoners with anything to hand. Corruption was endemic, warders offering their phones to inmates, encouraging them to call family members to arrange payment of $500 for their freedom.

And that is the least of the horrors. International aid agencies have documented cases of detainees being tortured with electric shocks, children being raped by guards, men and women sold into modern-day slavery.

And that compassionate lot in Brussels help fund such horrors.

Perhaps this is why the EU, which never misses a chance to disparage the UK, has kept remarkably quiet on the Rwanda policy.

The German ambassador to the UK however, has said the Rwanda deal is something that for his country would be out of the question. ‘We don’t do this kind of thing,’ he said, without a hint of irony.

True, the migrants involved in these cases are not being deported from EU countries as they would be from Britain under the Rwanda plan. 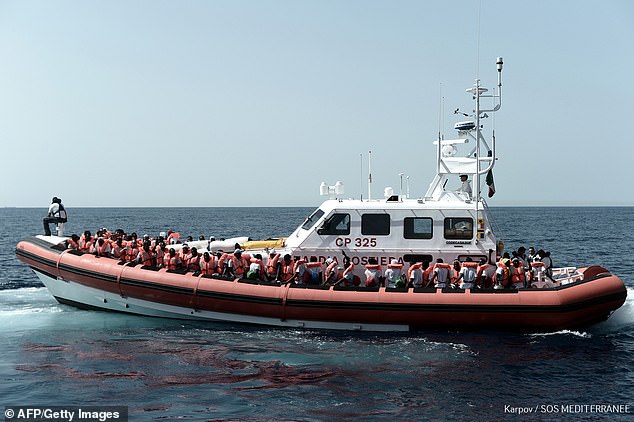 The Libyan coastguard is incentivised to pick up migrants in international waters and return them to detention compounds (pictured: Italian coastguard ship)

But the fact is that, in an effort to offshore its responsibilities, the EU — and its biggest player Germany — have funnelled so many millions to Tripoli that the detention of migrants is a ‘profitable business model’ for Libya’s government. So the EU admitted in a leaked internal report in November 2019.

The Libyan coastguard, heavily funded by Brussels and which Italy has largely trained and has donated boats to, is incentivised to pick up migrants in international waters and return them to detention compounds.

So cynical has the EU’s policy been that Libya’s Minister for Justice from 2012 to 2014, Salah Marghani, sees it for what it is. ‘The EU did something they carefully considered and planned for many years,’ he said. ‘Create a hell hole in Libya, with the idea of deterring people from heading to Europe.’

Amnesty International, the Human Rights Council and the Transnational Institute have all been scathing in their assessment of EU-funded camps in Libya. The last of these titled its April 2021 report ‘Outsourcing oppression: How Europe externalises migrant detention beyond its shores’.

The bloc hasn’t been blind to the problem though, and while it’s near impossible to improve facilities on the ground, they have been able to evacuate some migrants.

To immigration centres in Bavaria, Stockholm or Amsterdam perhaps? No, you guessed it, to Rwanda. Yes, this much maligned country in sub-Saharan Africa was favoured by Brussels to accommodate its refugees.

The European Transit Mechanism was the programme by which migrants were evacuated from squalid Libyan detention centres, first to Niger in West Africa in 2017, and then to Rwanda in 2019.

The programme was the brainchild of the United Nations High Commissioner for Refugees — the same body so critical of the UK’s policy. The EU was involved as a donor to the initiative.

Speaking to Reuters news agency, refugee Peter Nyuon agreed that conditions in Rwanda were much better than in Libya, where he had been previously after fleeing South Sudan when his father and grandfather were killed in fighting.

But the EU hasn’t just been sending its asylum seekers to Africa. In March 2016, the darling of EU-remainers everywhere, Angela Merkel, spearheaded a deal with Turkey’s premier Recep Tayyip Erdogan to keep EU-bound migrants firmly on the Turkish side of the Aegean.

Those caught trying to get to Greece would be returned to Turkey, rather than have their applications processed inside the EU. Up to six billion euros were offered in a bargain that should seem Faustian to those who now carp self-righteously about the UK’s deal with Rwanda.

Meanwhile, EU-funded camps house migrants in Serbia, in conditions that have been described as inhumane and degrading. But Belgrade, like Ankara and Tripoli, has been bankrolled by Brussels to keep the immigration problem away from the EU’s borders.

So, the next time a pious liberal castigates Priti Patel’s Rwanda deal, do remind them of what the EU has been up to.