Home » Lifestyle » Is your Christmas tree naff or not?

Is your Christmas tree naff or not?

Is your Christmas tree naff or not? Style arbiter Nicky Haslam gives his acerbic appraisal of the best – and worst – ways to do festive decorations

Having ‘done’ so many Christmases, people might assume that I’m a terrific snob about Christmas trees but, actually, I think many of the things people can do nowadays are really rather wonderful.

For instance, these new ‘half trees’ – you know, the ones sliced lengthwise, which you can hang on a wall – look absolutely stunning placed against a mirror. You won’t have to worry about the back being a bit bare and the kiddies can’t fiddle with the plugs.

I’m not against fake trees, either. They’re often a much better shape than the real ones and those with frosted branches can look so romantic: very Doctor Zhivago, I always think, and a far cry from the cotton-wool dollops of yesteryear. 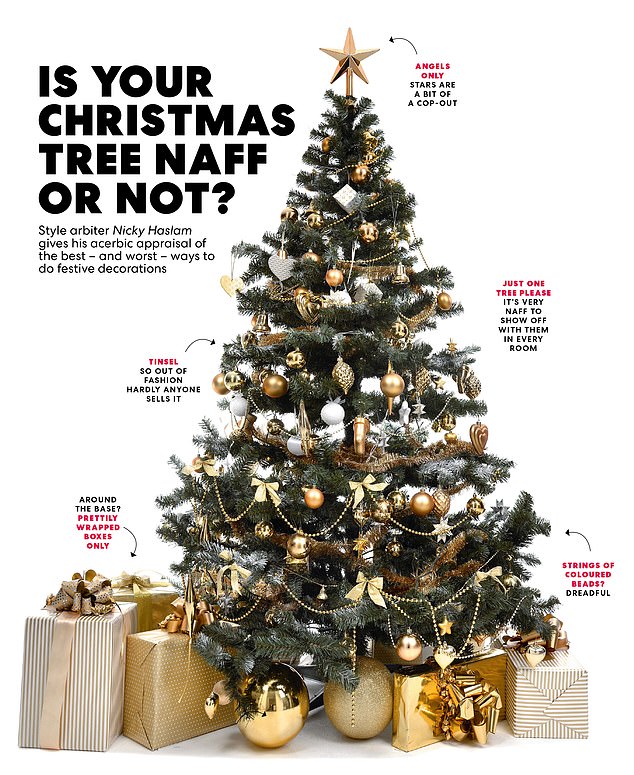 For instance, these new ‘half trees’ – you know, the ones sliced lengthwise, which you can hang on a wall – look absolutely stunning placed against a mirror

Spray-on snow is very effective on a tree, albeit a bit of a hazard (‘Take that can out of your mouth this minute, Wilfred!’), but it’s absolutely awful used anywhere else (window panes!). And why on earth must people follow the latest trend of ‘decorating’ their trees with fake flowers? Awful, glittery lilies and roses. Wrong shape, wrong season. Don’t do it.

An angel on top of the tree? Well, of course (stars are a bit of a cop-out) but let’s not put dolls elsewhere, please, and no teddies or candy canes, either. Especially not candy canes – very infantile. We like to tell ourselves that Christmas trees are for children, but most people are far too controlling to actually let a child trim a tree. (‘Georgia! Do not put that there!’)

I have noticed, of late, that people seem to want to festoon their trees in Halloween-style lanterns – very common (as is Halloween itself). The tree lights rule is a simple one: small, white and static. Flashing lights are for nightclubs and emergency vehicles only.

While we’re on the subject of strings of things, let’s talk about tinsel. It’s such a fiddle to deal with and gets in one’s hair, or the soup. Not that it really matters, because tinsel is so out of fashion these days that hardly anyone sells it. However, don’t be tempted, whatever you do, to replace it with strings of pearls or coloured beads. Dreadful.

People sometimes seek my advice about colour schemes on trees. Well, if you must have a colour-coordinated tree, then green, white or red, I think. Not purple or blue. And absolutely never trendy orange.

I’m often asked how I choose tree decorations. Many of mine are dusty, old friends saved for centuries and tied on with tartan ribbon. Tartan looks great on trees.

The best shop I ever saw for beautiful baubles was in Moscow (in fact the Russian tsars were instrumental in introducing the idea of decorating trees) and they were all made of beautifully painted spun glass. Quite ravishing. And recently I spent Christmas at a very grand castle where the decorations, without exception, came from garage forecourts. Quite chic, in its way.

I’m not against fake trees, either. They’re often a much better shape than the real ones and those with frosted branches can look so romantic: very Doctor Zhivago, I always think, and a far cry from the cotton-wool dollops of yesteryear

These days I’ll just pick up the occasional twinkly thing at a garden centre (there are some terrific plastic snowflakes that work as coasters if you are common enough to have them) but I will not… repeat, not… be indulging in decorations featuring words such as ‘Noël’ or ‘Yule’. Or ‘Love’ – now that really is unbearable. Neither will I be putting my Christmas cards on the tree. Never mind common – it’s downright impractical. The whole point of cards is to see who they’re from.

I could go on and on about the common things that you can heap on to your tree, but the decorations are not the only issue. There are also important considerations such as where to put it and what to put it in.

So, where? It doesn’t much matter which room but just one tree, please. It’s very naff to show off with more… some people have them in every downstairs room. And in what? A wicker basket is lovely. Or even a giant flowerpot. And with tons of prettily wrapped boxes round the base. Just none of these terrifying, glittery stands.

All that said, the worst possible thing you can do with your Christmas tree is to bore the rest of us with it for months on end. Up on the 24th of December and down on the 12th night is the rule. Personally, I don’t like mine to get to New Year. Whatever you do, though, please spare us the tree that goes up in October and comes down in March. It’s the 12 days of Christmas, not the six months. Spinning the ‘festivities’ out really is common.