Fun for the whole family! Ivanka shares sweet photos from her Memorial Day Weekend getaway with Jared and their kids – as the couple prepares to join the president in London next week

Ivanka Trump appears to be soaking up as much time with her family as possible before heading off to London next week – and what better time to enjoy a quality getaway with the kids than for Memorial Day Weekend.

The 37-year-old and her husband Jared Kushner, 38, escaped the daily grind of Washington, D.C. for the long weekend, and Ivanka couldn’t resist sharing a few sneak peeks at their trip on Instagram.

There, she shared videos of her kids watching fireworks, and driving around in an ATV, as well as a sweet snap of herself and her husband smiling for the camera while posing in front of a golf course – believed to be at the Trump resort at Mar-a-Lago. 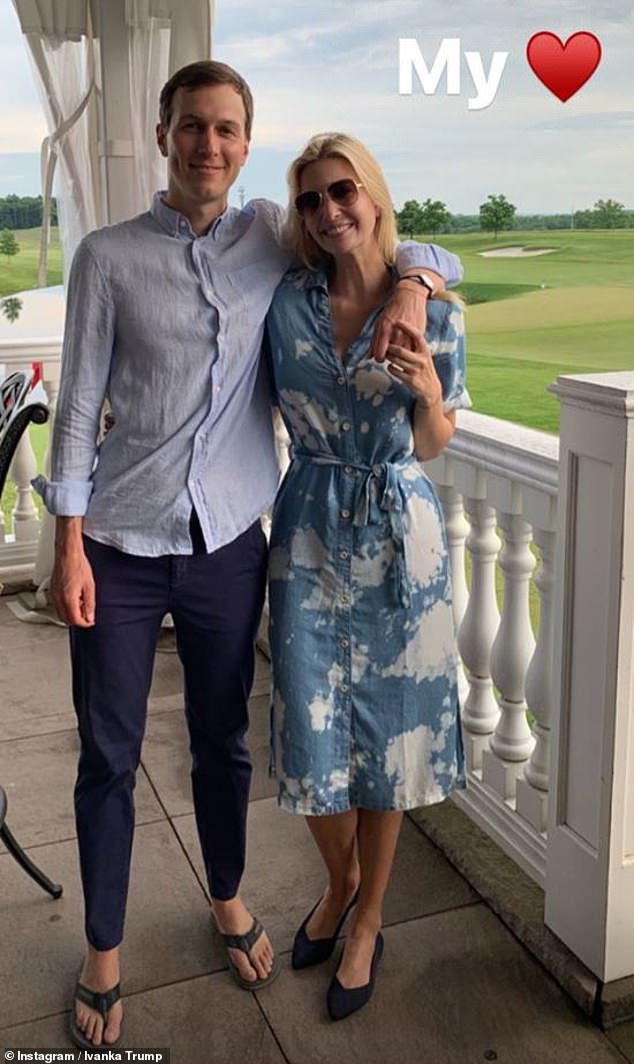 Quality time: Ivanka Trump enjoyed a Memorial Day Weekend getaway with her husband Jared Kushner and their three children, days before the couple is due to travel to London 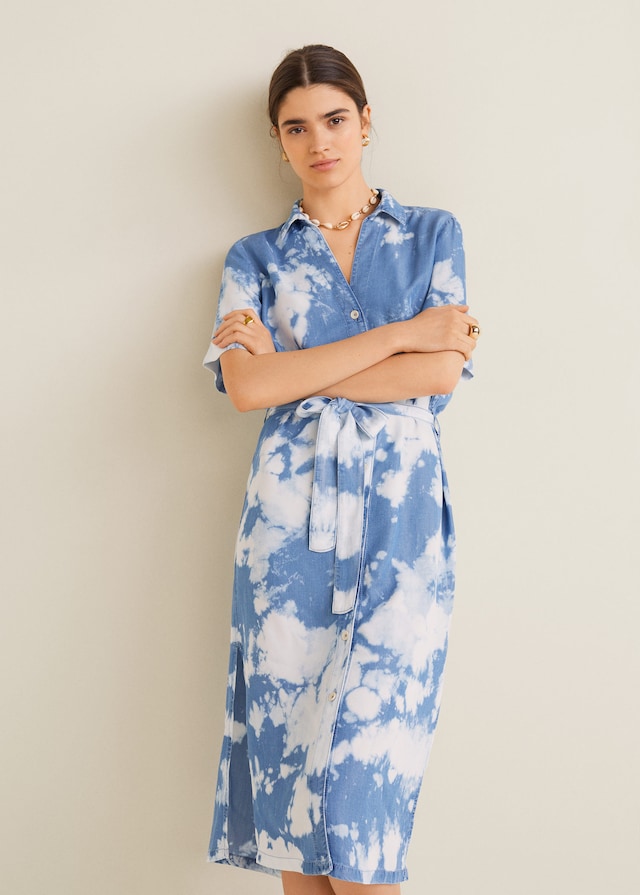 Ivanka Trump may be enjoying a fancy Memorial Day Weekend at Mar-a-Lago but the First Daughter did keep things budget with her choice of outfit.

In this picture Ivanka is wearing a Mango tie-dye dress, showing yet again that high street can look high end. We love the flattering cut of the dress, the belt nips in the waist while the midi length is a good choice for a stylish yet conservative finish.

Best of all, it costs a rather reasonable $79.99 and is still available to buy! Click right to get yours now and watch this piece be a staple of your every day summer style.

Wear to work or a weekend BBQ, the options are endless! Want the look for less? Head to our edit below for more tie-dye inspiration. 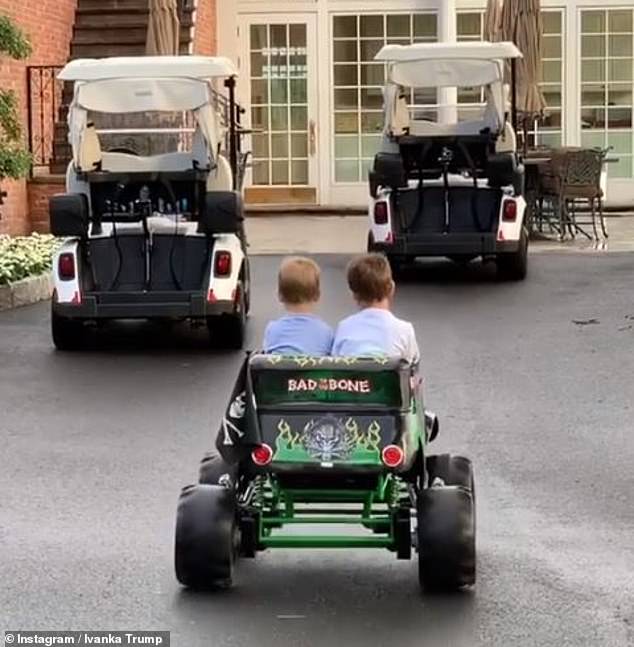 Vroom vroom: The 37-year-old shared a video of two boys – thought to be her sons Joseph and Theodore – driving an ATV-style vehicle with ‘bad to the bone’ written on the back 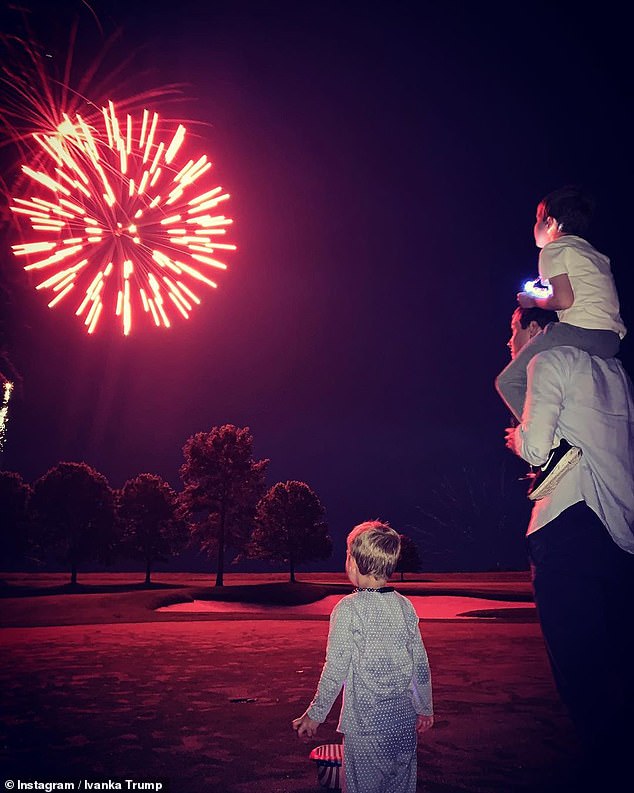 Light up the sky: The two boys were also pictured watching a firework display with their father

In the image, which was captioned simply with, ‘My [love]’,  Ivanka can be seen modeling a casual denim tie-dye dress, as well as a pair of chic blue pumps and aviator-style sunglasses.

Her husband meanwhile went even more low-key, options for a linen button-down, a pair of navy blue pants, and some flip flops – a bold step away from the dapper suits he so often wears for his day-to-day job as a White House advisor.

The couple’s children also appeared to be relishing the weekend getaway, with their mother sharing sweet snaps and clips of them on her social media.

In one video, two young boys, thought to be Ivanka’s sons Joseph, five, and Theodore, three, are seen driving a small ATV-style vehicle with ‘bad to the bone’ written across the back past a line of golf carts.

A photo posted on Ivanka’s main account and her story, shows the two boys enjoying a firework display with their dad, who hoisted one son onto his shoulders, while the other watched on by their side.

There was also video footage of the fireworks being shot up into the air, while Katy Perry’s hit son Firework played in the bcakground.

Ivanka did not post any videos of photos of her seven-year-old daughter Arabella however, and it is not known whether the youngster joined the rest of her family for the weekend.

The president and first lady were also not present for the weekend, because they are currently on a state visit in Japan, however Trump did find time to tweet out solemn remembrances of the sacrifices of U.S. troops in honor of Memorial Day.

Ivanka also shared a more somber Memorial Day post, sharing a picture of several military graves, while writing: ‘This Memorial Day, the Nation joins to remember the patriots who gave their own lives in service of ours.

‘As we spend this day with our loved ones, let us pay tribute to the fallen heroes who afforded us this freedom.’

Her family’s fun-filled getaway comes just days before Ivanka is due to fly to London in order to join the President and First Lady on their official state visit, along with her two brothers, Donald Jr and Eric, and her sister Tiffany.

President Trump’s eldest siblings are understood to be joining him for several – but not all – of his official engagements during the trip, which is due to take place between June 3 and June 5.

Jared and Eric’s wife Lara – who is pregnant with their second child – are also expected to travel with the first family.

Tiffany, 25, who is currently on spring break from her studied at Georgetown Law School, is actually already in London with her billionaire boyfriend Michael Boulos, after the pair enjoyed a glitzy trip to Cannes for the annual Film Festival.

Ivanka meanwhile was seen leaving her D.C. home on Friday with her son Theo, with the first daughter’s casual appearance suggesting that the family was making their way out of town, rather than into the office.

Instead of her usual demure dresses and businesslike attire, Ivanka was wearing a simple striped tee, and her hair was pulled back into a messy low bun. Her youngest child was sitting next to his mother in a car seat, wearing a simple white T-shirt and drinking from a plastic water bottle. 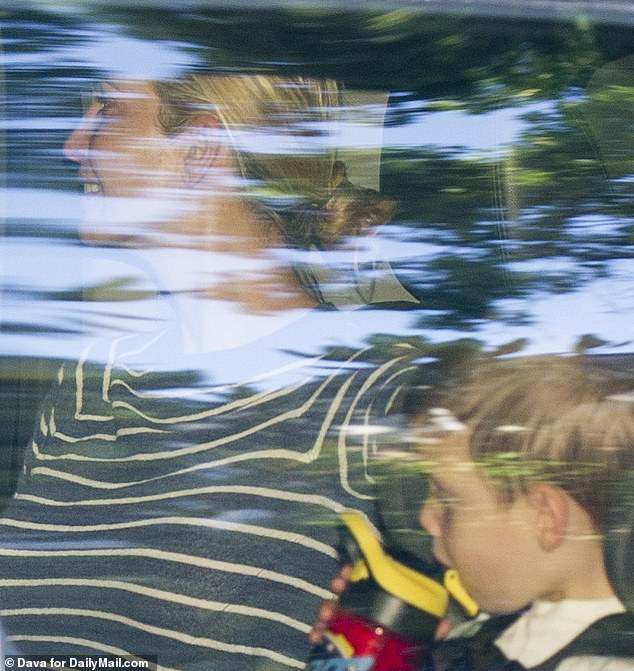 Casual: On Friday, Ivanka was seen leaving her home in a casual outfit, while accompanied by her son Theodore 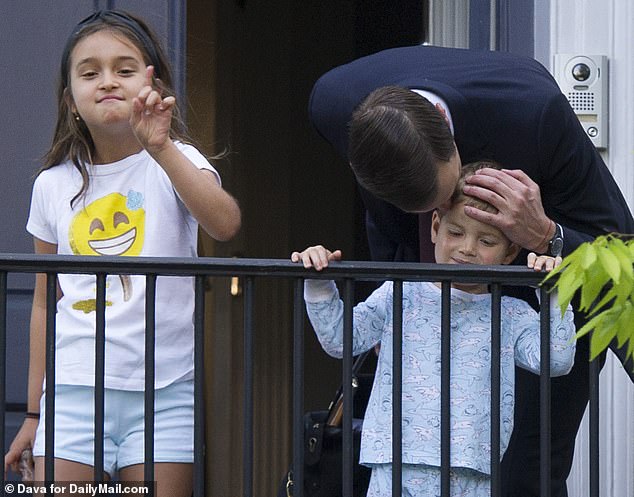 Cute! Earlier last week, Jared was spotted with daughter Arabella (L), seven, and son Theodore (R) as he left the house for work on Monday morning 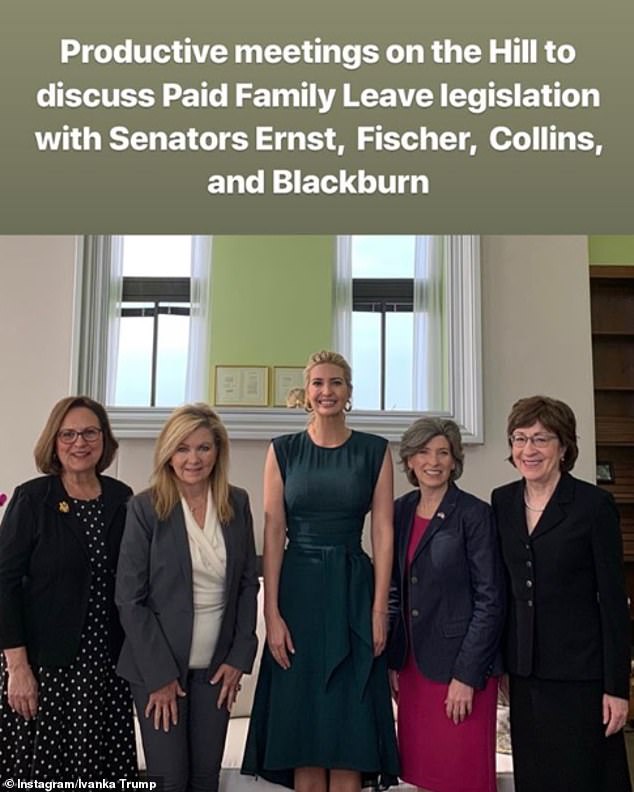 Just before heading off on her weekend getaway however, Ivanka attended a more formal meeting with Senator Joni Ernst on Thursday, May 23, to discuss paid family leave.

The pair was accompanied by several others including Senators Deb Fischer, Susan Collins and Marsha Blackburn, as they discussed paid family leave legislation.

Sharing a photo of herself and the four women, Ivanka said: ‘Productive meetings on the Hill to discuss Paid Family Leave legislation with Senators Ernst, Fischer, Collins and Blackburn.’

‘This is something we must achieve to support America’s hard-working families,’ she added.

Images shared in Ivanka’s Instagram stories showed her donning an emerald green mid-length gown that showed off her trim waistline for the occasion.

She teamed the dress with a pair of strappy black shoes and what looked like a matching black leather bag.

She styled her hair in a casual ponytail, wore a pair of simple gold hoop earrings and kept her makeup fresh and natural.