Icing sugar Paul and a half-baked Boris… something’s stirring in the flour sacks! JAN MOIR’s view from the sofa as The Great British Bake-Off returns at last

The Great British Bake Off

With a transmission time pushed back 15 minutes because of the Prime Minister’s Covid address to the nation, the Great British Bake Off cooked up some piping hot revenge.

Under a blond wig, Lucas looked almost more like Boris than Boris, and succinctly parsed the confusing messages that emanate from Downing Street. 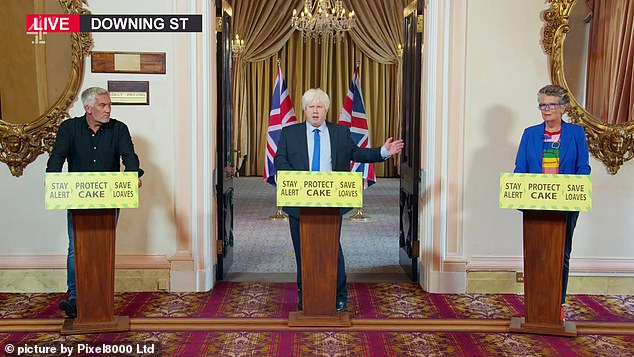 ‘Same old Bake Off. Familiar, comforting, lovely,’ Prue Leith informed us. Oh really? Are you sure? That was before her dazzling toothy-pegs alighted on contestant Loriea’s bubblegum and cream soda-flavoured Battenburg, sinking into a pelt of thick blue marzipan from which easy extraction seemed unlikely.

Thence to throb with dismay at a mint-flavoured cream filling (dismissed as ‘toothpaste-y’) elsewhere before being tormented again by Loriea, who had flavoured a chocolate cake with ginger and powdered Scotch bonnet chillies – because why not?

In this citadel of competitive cakery capers, vanilla is often too vanilla for the ambitious baker even if their boldness is not always appreciated.

‘That’s a little bit overwhelming,’ said judge Paul Hollywood, looking freshly dipped in icing sugar, as hot chilli tears sparked deep in his baby blues. Wheezing at his side, Prue could only concur.

When Loriea’s technical challenge cakes were judged too pale and her cream topping too messy, her fate was sealed. She was the first to leave the Bake Off tent this year, a sad exit during Cake Week for a spirited soul.

Peter, a shy young Scot who survived being described as a ‘20-year-old badminton-mad accountancy student’, was the first star baker of the series. His showstopper cake was flavoured with good old strawberries and cream, plus whipped egg whites – is there a moral in the simplicity of his meringue?

Before this, there was carnage and scandal at the conclusion of the technical challenge. Pharmacy dispenser Sura accidentally bumped into security guard Dave, tragically sending his pineapple upside-down cakes the right way up. She burst into tears and scrabbled through the mess on the floor trying to salvage his bakes. He walked off, quietly seething. 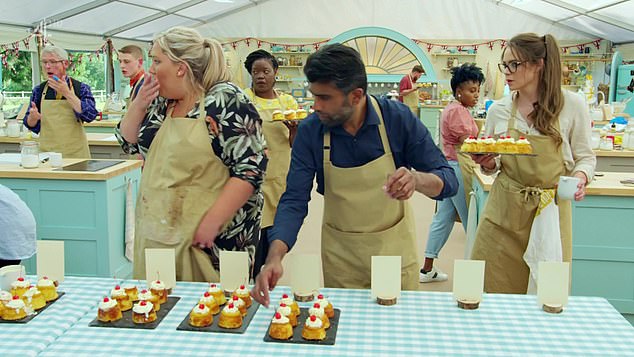 ‘Accidents happen,’ he said later through gritted teeth, trying and just failing to be 100 per cent magnanimous. Could you blame him?

He was judged on the two perfect cakes that remained intact and squeezed through to the next round. This is the 11th series of GBBO, but the first one made under socially distanced rules. One can only pity poor Prue, who had to isolate with fellow judge Paul, plus hosts Noel Fielding and Matt. ‘There is not a grown-up among you,’ she told them last night – and who would argue with that?

During his first outing on the show, former Little Britain star Matt wasted no time in declaring himself homosexual, unattractive and a lover of Super Noodles while balancing a rolling pin on his bald head. It was a bit try-hard but fine by me, as anything is an improvement on Sandi Toksvig.

All white on the night

He has judged Bake Off since the show began in 2010 and some of the culinary disasters have been enough to turn anyone’s hair grey.

But Paul Hollywood’s crowning glory has gone further and turned white over the years. The 54-year-old son of a bakery owner from the Wirral was already going grey when Bake Off started a decade ago. But for the new series he has cooked up a new look, with a distinctly white topping.

To be honest, I had not been looking forward to this series very much. Once upon a time I loved Bake Off with a passion, but it has been stuck in a rut for the past few years – over-baked by a rigid format and strictly patrolled by its own catchphrases and customs, leaving little room for the unfamiliar or the pleasant surprise.

But this year, something is stirring in the flour sacks. It feels different already. Perhaps it was just the anarchic showstopper challenge, in which bakers were asked to make a cake ‘bust’ of their personal celebrity hero.

The choices were bizarre – Louis Theroux, Charles Darwin, a lemon madeira Bill Bryson? ‘Yes, it’s obviously Bill Bryson,’ said Prue, of a cake that looked nothing like the famous author, but bore a startling resemblance to Grandpa Simpson instead.

One baker produced a Coconut Ziggy – a depiction of David Bowie described as ‘a fondant lightning strike decorating a chocolate sponge and vanilla buttercream reimagining of The Thin White Duke’. Not quite. The end result looked like someone had taken an axe to Ronald McDonald’s skull.

And we all know that the Bake Off is PC right down to its fair trade sugar supplies, but why didn’t anyone say anything about Linda’s Bob Marley cake? Not only did it look like a hunk of half-baked bread – poor Bob had turned suspiciously white. Have they forgotten that black loaves matter?

Overall, a strong start for the new series where there was comfort aplenty in the cinnamon-scented warmth of the familiar. Right now, at this exact moment, Bake Off answers to something yearning in our way of being.

What lies ahead of us? As we worry about the lives on hold, the troubling void, the uncertainty of curtailment, the home front seems even more important. Even if the cherry is off the pineapple upside-down cake. For the moment.

From, JAN, MOIR&apos;s, the, View'
Celebrities