What the butler saw (on the set of the Downton movie!) As Jim Carter and Lady Carnarvon host the first ever Downton concert at Highclere, he dishes on returning to the role of Carson…

This is an image that could mess with your mind.

Perched on a sofa in Highclere Castle, the real-life Fiona, Countess of Carnarvon, is being served Champagne by Jim Carter in his role as the fictional Mr Carson, trusted butler to Lord and Lady Grantham of Downton Abbey.

Life is imitating art, and all for a good cause. Ever since Downton became an all-conquering global sensation, the Carnarvons have been active in promoting Highclere, where much of the series was filmed, as a visitor destination for any number of special events.

One will take place on 22 June in front of 5,000 ticket holders, an alfresco evening of music from the TV series punctuated by clips and anecdotes from Downton over the years, the whole event hosted by Jim, dressed in Carson’s best white tie and tails. 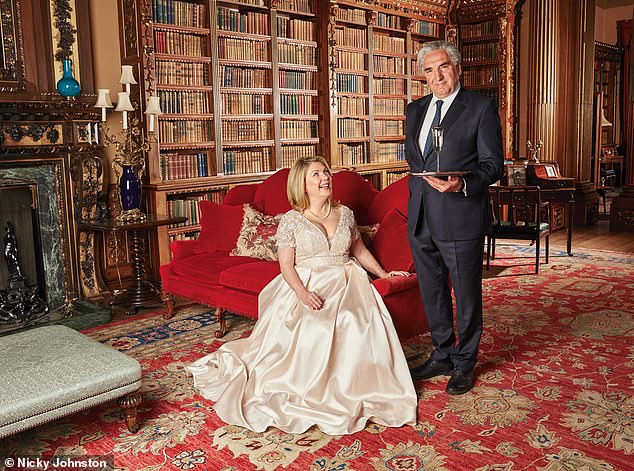 Jim Carter, in his role as butler Mr Carson, and Lady Carnarvon, pictured together at Highclere Castle, have planned a Downton concert for 5,000 ticket holders

‘John Gundill, the castle manager, and I had been toying with the idea of a Downton-themed concert for a couple of years,’ says Lady Carnarvon.

‘Our initial challenge was to find the right place in the diary so that, if it proved a success, it could be repeated at the same time the following year.’

There’s already an annual classical concert during the first weekend of August which has been staged at the castle, on the Hampshire/Berkshire border, for 18 years now.

‘Then we had 12,000 people for a concert by Elton John. It was the most amazing evening. And now we have Jim following in Elton’s footsteps.’

‘Yes,’ he interrupts, ‘Jim “Rocketman” Carter!’ And they both roar with laughter.

‘There’ll be something almost surreal about it all,’ chips in Lady C.

‘The audience will be immersing itself in Downton, 3-D style. We’re on a journey into the unknown. We constantly wonder how far Downton’s legs will carry us.

‘Who knows? The TV series was watched globally by 280 million people.’ 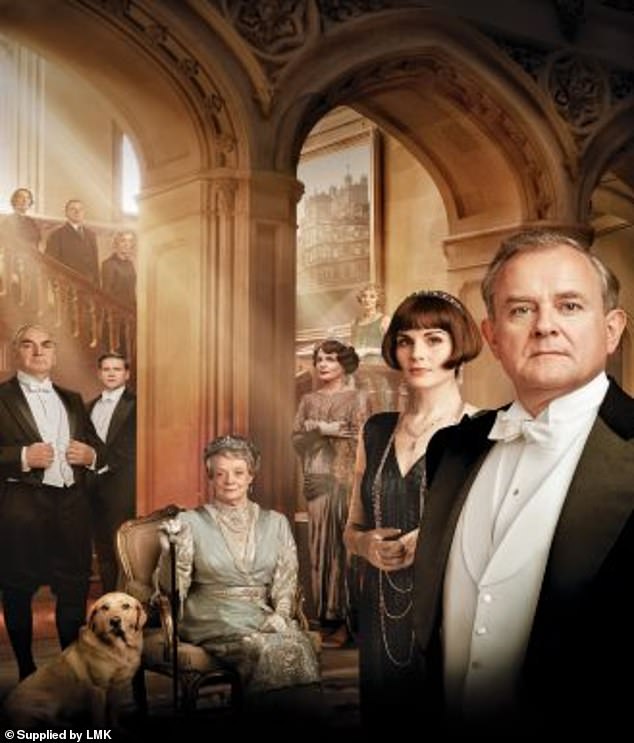 Jim, pictured far left as Mr Carson with the cast from the upcoming Downton film, also appeared in all 52 episodes of the TV show which ran from 2010 to 2015

Many of those fans will be queuing up to see the new Downton film when it’s released on 13 September.

It takes up the story of the Crawleys and their staff in 1927, a year after the TV series ended.

The main pivot of the movie is a visit by King George V and Queen Mary (Simon Jones and Geraldine James) and the impact on the Downton staff.

The officious royal butler (David Haig) and his retinue sweep into the kitchens ahead of the visit and announce that the resident staff will not be needed.

Tensions, unsurprisingly, spiral to a point where Lady Mary visits Carson in his retirement and pleads with him to intervene. ‘This is treason!’ he harrumphs. ‘I’ll be there in the morning, m’lady.’

Did Jim find it strange returning to his role as part of a fully fledged movie? 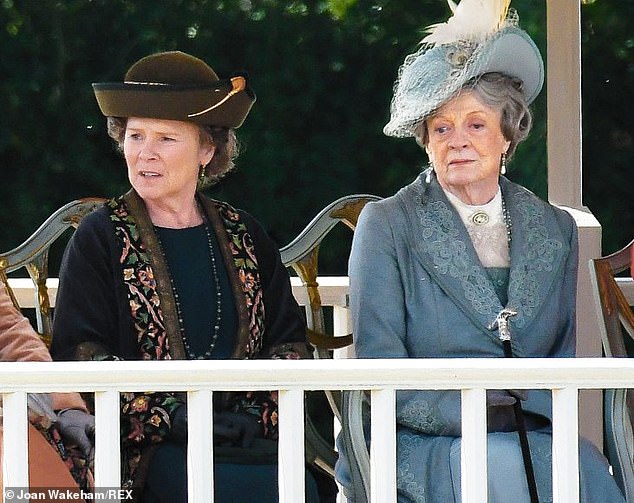 Imelda Staunton, who is Jim’s wife, will star as Lady Bagshaw in the movie which is released in September with Dame Maggie Smith, pictured right. Jim said the role came ‘out of the blue’

‘Well, it was quicker,’ he says. ‘A series was filmed in one block from February to August. The film took about ten weeks last autumn.

‘But it felt just the same making it, not least because we were playing the same characters. Personally, it was like putting on a pair of old slippers.

‘I’d change into Carson’s costume, comb my hair the way he wears it and there he was, as familiar to me as ever.’

He understood Carson from the off, he says.

‘When I read for the part there was a stage direction in the script that said something like, “Carson enters, in his magnificence.”

‘And I thought, “I can do that.” Without being vain, I thought I was a good casting for the role.’

Jim’s wife is the acclaimed actress Imelda Staunton, and I once asked her whether she’d like a part in Downton, given the show’s global success.

‘I’d be in there like a shot,’ she told me. ‘I fancy a part for a small woman with a drink problem causing a little trouble below stairs maybe.’

Well, she got her wish, but not quite in the way she supposed. ‘She thought if she was offered a part it would be downstairs,’ says Jim.

‘The offer came completely out of the blue. She turned to me one day and said, “I’ve just been sent an interesting script.” I asked her what it was and nearly fell through the floor when she said it was the role of Lady Bagshaw in the Downton film.

‘So that was lovely, but we don’t go out of our way to work together because it’s nice to do different things and bring different energies back home.’

As it happens, they had no dialogue together in the film. 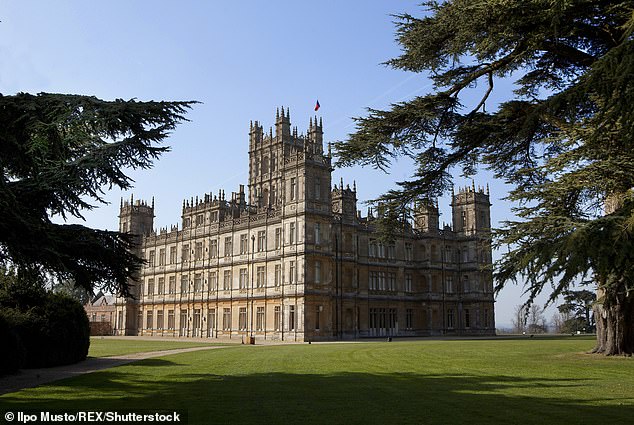 Ever since Downton became an all-conquering global sensation, the Carnarvons have been active in promoting Highclere, pictured, where much of the series was filmed, as a visitor destination for any number of special events

‘There were three days when we were in the same scene, once in a field as the King’s Troop came in on horseback, another time across the dining table.

‘But there was no interchange between us. I know it was a good experience for her.

‘And she was in storylines with other newcomers, like her maid Lucy, played by Tuppence Middleton, and with Geraldine James as Queen Mary.’

The trailer makes clear there will be some very sparky scenes, such as when Lady Bagshaw resists being browbeaten by Maggie Smith’s formidable Dowager Countess.

Former chauffeur Tom Branson (Allen Leech), left a widower through the death of his wife Lady Sybil in childbirth, takes a shine to maid Lucy.

In time, the countess rounds on Lady Bagshaw, accusing her of having a fast-and-loose young woman in her employ.

‘It turns into quite a clash between two feisty women,’ says Jim. Now Imelda has joined the aristocracy, has she acquired airs and graces?

Does she ring a hand-bell when she requires a cup of tea? Jim rumbles with laughter.

‘She doesn’t have to. I’m completely under her thumb. My morning mission, as it has been for many years, is to carry a tray of tea to the bedroom as she wakes up.’

Downton Abbey first aired in September 2010 and bowed out, after six series, in December 2015.

Jim Carter appeared in each of the 52 episodes. Does he have any particularly favourite moments?

‘Yes,’ he says, ‘Lady Mary coming down the stairs in her wedding dress prior to marrying Matthew.

‘Her father, Lord Grantham, was there but she looked at me and said, “Will I do, Carson?” It made me feel like her “downstairs Dad”.’ 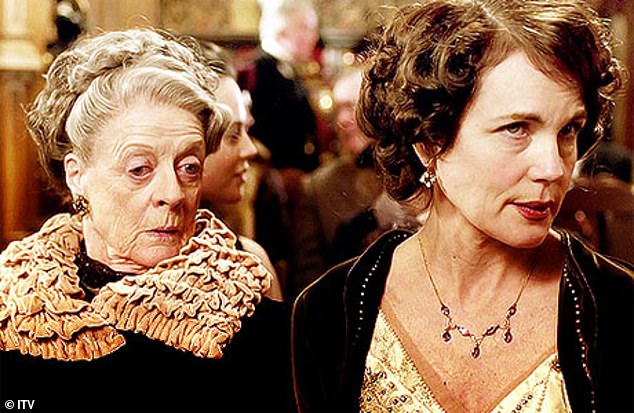 Downton Abbey first aired in September 2010 and bowed out, after six series, in December 2015. Pictured, Maggie Smith and Elizabeth McGovern in character on the show

He always loved his scenes with Lady Mary (Michelle Dockery). ‘One always sticks in my mind. It was written for series one but for some reason we never got to film it.

‘I implored them to put it in series two – and they did. It showed me talking to Mrs Hughes, recalling when Lady Mary was six years old and borrowed sixpence from me because she wanted to go into town.

‘It had been her idea to steal some silver and sell it. But I advised against it and lent her the sixpence instead.

‘Mrs Hughes asked if she ever repaid me, and I answered, “Yes, she repaid me with a kiss, which was payment enough.” So sweet.

‘Carson is so intent on not letting anyone see behind the façade. That’s what makes the private moments so much more poignant.

‘He’s very traditional; he doesn’t want anything to change. As a 70-year-old myself, I have some sympathy with all of that.’

For Lady C, the impact of a film crew taking up residence for seven or so months every year was quite a challenge.

‘But we got quite practised at handling that. We stuck all our best china in the smoking room, and the desk that once belonged to Napoleon was also moved out of potential harm’s way,’ she says.

‘And we were very conscious of van Dyck’s portrait of Charles I on horseback in the dining room,’ adds Jim. ‘At the end of the day, it was our “office” but the Carnarvons’ home.’

So were there ever any accidents? ‘Yes,’ says Lady C, ‘there was the time when the cast was sheltering in a makeshift green room because it was raining.

‘It was only later I realised someone had put a cloth on an early-19th-century dining table in there and used it as an ironing board. Not a happy moment.’

Although they have a separate house on the estate, Lady C and Lord Carnarvon also have quarters within Highclere.

What if Maggie Smith, say, fancied a nap between scenes, did Lady C make a bedroom available to her? 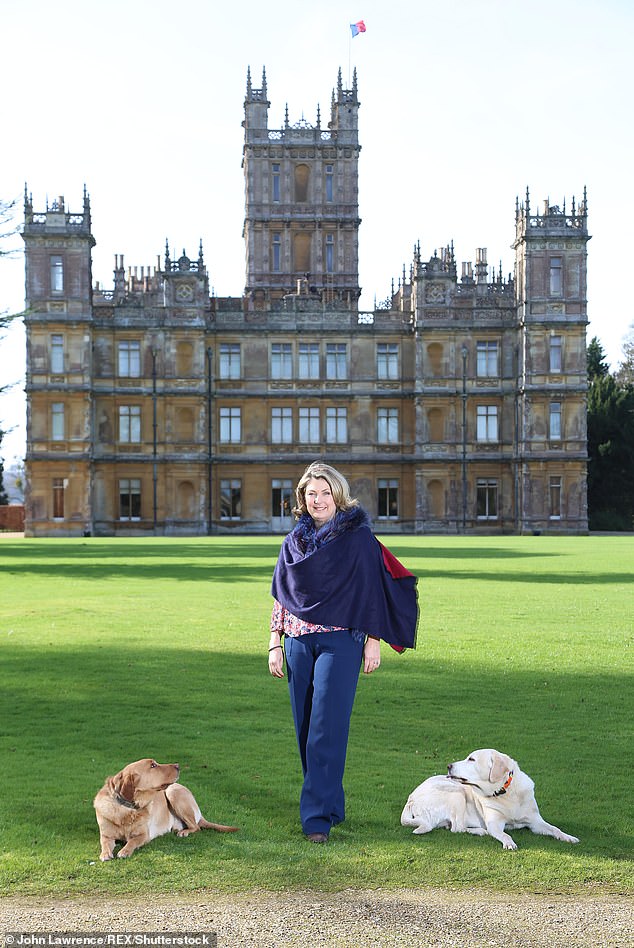 ‘Of course – and that occasionally happened. We have between 50 and 80 bedrooms depending on what’s required at any one time.’

Initially, Lady C got to know the actors playing the Crawleys because their scenes were shot at Highclere.

The downstairs staff filmed all their action at Ealing Studios. ‘So I made a point of inviting them to the castle,’ she says. ‘Lesley Nicol [Mrs Patmore] came to stay more than once.’

Who could have predicted ten years ago the extraordinary success of Downton? And now, of course, there’s the film, complete with a royal visit that echoes Highclere’s past.

‘Queen Caroline, the wife of George II, once stayed here,’ says Lady C, ‘as did Edward VII, while the current Royal Family have all been here.’

And what about George V and Queen Mary? ‘Absolutely. I have their signatures in the visitors’ book.’

Historical rumour suggests you’d have been advised to count the silver teaspoons after Queen Mary had departed.

Has Lady Carnarvon heard as much? ‘There have been various stories,’ she says, ‘but overall she was a rather magnificent queen.’