In the past three decades, the Reserve Bank has only increased interest rates by more than half a percentage point on five occasions.

Three were in 1994 when then-governor Bernie Fraser took the cash rate from 4.5 per cent to 7.50 per cent between August and December. Then in 2000 when Ian Macfarlane added half a percentage point during the frothiest part of the dot.com boom and a surge in Australian housing prices. 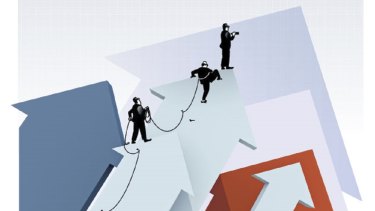 Interest rates are only headed in one direction – up.Credit:Suzanne White

Now Philip Lowe has joined the exclusive club, taking the cash rate to 0.85 per cent with a half percentage point hit.

There were two key points in Lowe’s statement announcing the move. They go to risks facing the bank, the economy and the new Albanese government.

The first is the bank admits inflation is moving way too quickly. In a Homer Simpson “d’oh!” moment, Lowe said “inflation in Australia has increased significantly”.

But a few lines later, he elaborated by noting the bank’s own forecasts on inflation – less than a month old – were wrong. Those forecasts were for inflation to peak around six per cent by year’s end.

So Australians are going to have to get used to even more pain in our shopping centres, at the petrol pump and through our online purchases.

That concession gives the bank the cover for its half percentage point rise, and to move more aggressively through the rest of the year to get interest rates back to some sort of normal.

The other point is how the property market reacts to increasing rates.

The bank, stung by what happened pre-Covid, is concerned that given Australians’ addiction to housing (and house prices) borders on a medical condition, anything that deflates the market will have a deep impact on the broader economy.

This is a problem the bank (and governments) have contributed to over a long period of time. But now we’re at the pointy where the second most heavily indebted households in the world are being asked to find hundreds of dollars more a month to cover record-sized mortgages.

It’s a political headache for the new government – but also an opportunity.

Through the election campaign, this paper reported on the obvious dangers posed by the March 29 budget with its spending plans such as the super-sized low and middle income tax offset that will start flowing from July 1.

It’s the budget that Jim Chalmers has inherited. And it’s the one he can now reshape, arguing for cuts in areas that pre-election were politically off-limits.

There are obvious infrastructure projects that can be shelved and programs that can be cut as ways to take some cash out of the economy.

Remember, the deficit for the coming financial year is $78 billion. Does anyone really believe the economy needs that amount of extra support to get by?

But Chalmers cannot wait until October to deliver his promised cost of living relief package. It seems untenable the super-sized lamington will be enough to assuage angry taxpayers.

Voters might be prepared to give the new government some time to find its feet. But they won’t if they find they cannot afford to go out for dinner or buy extra clothes because interest rates are eating into their lives.