Home » Lifestyle » Joel Corry: From reality TV star to top of the charts

Joel Corry: From reality TV star to top of the charts

“I had this track nearly ready to go [at the start of lockdown] and I was thinking of holding on to it until the clubs opened – but I just couldn’t do that.”

“I’d worked so hard at it and I thought I’m just going to go for it,” DJ and producer Joel Corry tells Radio 1 Newsbeat.

That track – Head & Heart featuring MNEK – has just spent six weeks in the number one spot, with its positive message proving the perfect escape for people at a difficult time.

It’s the 31-year-old’s third song to make the top 10, following on from the success of songs Sorry and Lonely.

“I realised the track was actually making people feel really good on a daily basis when they were getting in their car or putting on the radio.

“Everyone was going through such a rough, weird time, where they were feeling so stressed and anxious and I feel like this song gave people an uplift.”

The same decision was made by Dua Lipa earlier in the year too, who brought her album release date for Future Nostalgia forward to “give people some happiness during this time”. 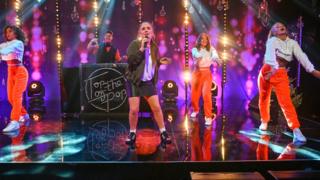 She too, like Joel Corry, wanted her music to be heard at clubs and festivals throughout the summer, but it instead became a lockdown soundtrack in the UK.

“With my music I normally road test it in clubs, go back to the studio and make tweaks.”

Although Joel has been a club DJ since he was a teenager, it was appearing on Geordie Shore alongside his then-girlfriend Sophie Kasaei in 2013 that first got him a social media following.

“I was in a bit of a different situation to usual – people knew me from that and were then maybe paying attention to my music so there are two sides to it.

“It’s still nice when I’m out DJing and people come up to me and they’re like ‘I remember you from that [Geordie Shore] and it’s nice they used to watch the show back in the day.”

But Joel says although he already had a following when he started putting music out, he had to work harder to be taken seriously professionally.

“There were some hurdles put up because of what I did back then – there’s a stigma in the music industry around that sort of thing,” he says.

“But I was willing to put the work in, and I mean really put the years and years in – working 24/7.”

Joel first started releasing music back in 2015 – but he wouldn’t get a song in the charts for another four years.

“There’s no timeframe on it – you just have to keep going, even if there’s people looking down on you or doubting you.

“It was just more motivation for me to prove people wrong and if anything it just made me work even harder.”