Fab idea! John Lewis is selling a £225 fascinator designed to look like the classic ice cream treat as the Queen’s favourite milliners unveil eye-catching 2021 designs ahead of Royal Ascot

Race-going ladies with a bit of lolly can splash out on an unusual hat for Royal Ascot that looks like a Fab ice cream after someone’s taken a healthy bite.

John Lewis is selling a bright pink, white and brown silk fascinator, made by London-based Bundle MacLaren Millinery – one of Zara Tindall’s favourite brands, for £225.

The titfer has a ‘hand-carved foam lolly’ with a beaded topping, which is covered in ‘Orissa silk’ and held in place with a hairband – and the luxury hat maker says it’s ‘perfect’ for horseracing or weddings.

It comes as celebrity and royally approved milliners reveal their eye-catching designs for 2021 that have been chosen for this year’s Royal Ascot Millinery Collective. 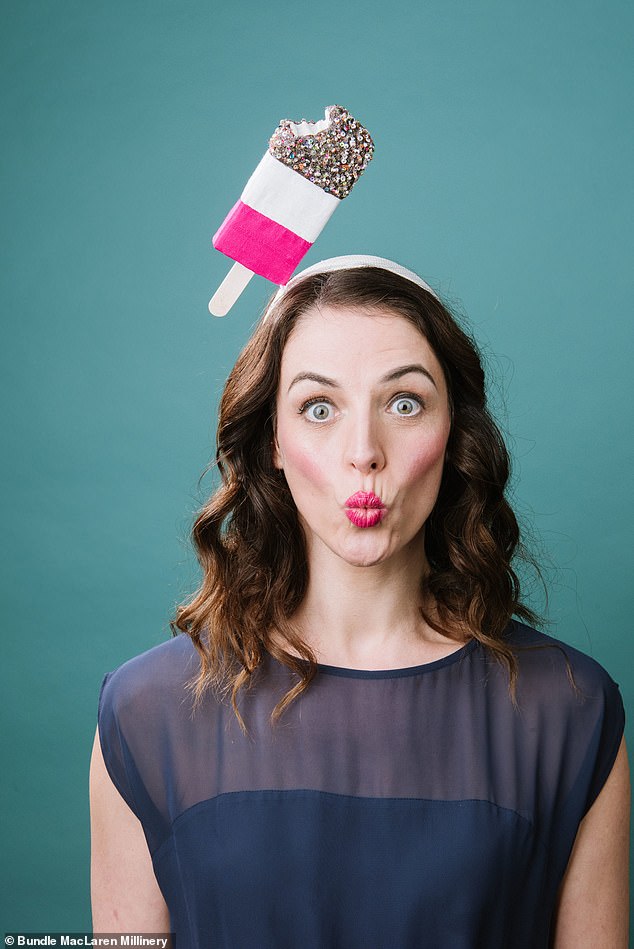 John Lewis is selling a bright pink, white and brown silk fascinator, made by Bundle MacLaren Millinery – one of Zara Tindall’s favourite brands, for £225, featuring a Fab lolly

Royal Ascot is set to welcome back up to 10,000 spectators per day for next month’s five-day prestigious meeting.

Famed for its glamorous Ladies Day, the event was cancelled last year due to Covid-19. The race meeting in the Berkshire town usually attracts up to 300,000 punters a year.

Each year the racecourse is awash with colourful classic and contemporary fashions as well as the most magnificent and spectacular millinery creations.

Some shoppers were left perplexed by the John Lewis creation, with one saying: ‘Fascinates me. What the f**k.’

Another joked: ‘I own an ice cream shop, this is now compulsory uniform for all staff,’ while a third added: ‘I have to say this, I think it’s Fab.’ 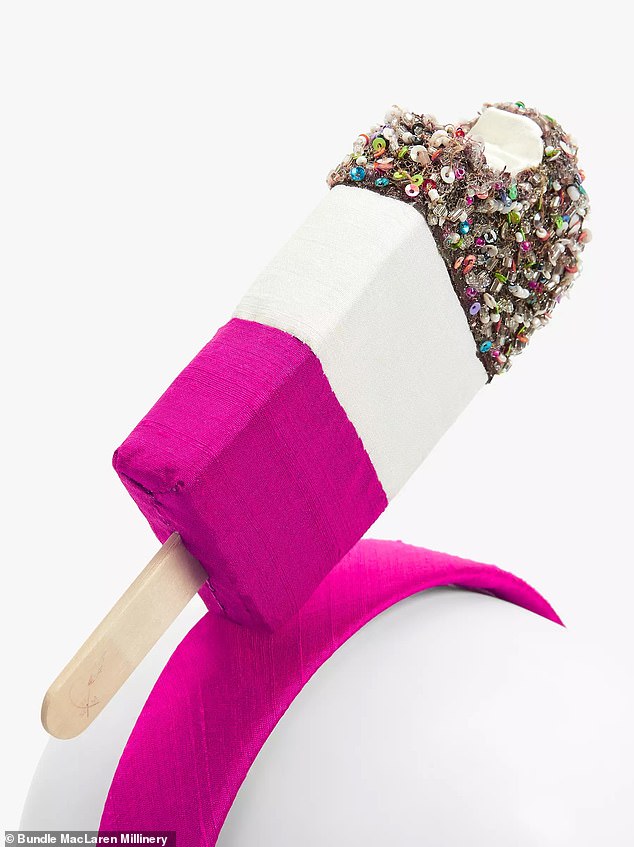 The titfer has a ‘hand-carved foam lolly’ with a beaded topping, which is covered in ‘Orissa silk’ and held in place with a hairband – and the luxury hat maker says it’s ‘perfect’ for horseracing or weddings

Department store giant John Lewis – renowned for its ‘never knowingly undersold’ motto – have it priced at £25 less than Bundle MacLaren Millinery, where it is £250.

Meanwhile luxury department store Fenwick has once again paired with the Royal Ascot Millinery Collective to release a collection of dazzling pieces created by some of the monarch’s favourite designers – including Stephen Jones OBE and Philip Treacy OBE – with prices up to £4,550.

With playful bold and colourful designs, this year’s Royal Ascot Millinery Collective features wide brims, huge flower decorations and delicate feather pieces, while several of the pieces have towering styles, making them sure to help the wearer stand out from the crowd.

Many of the designs draw inspiration from nature, which has been such a welcome retreat for so many over the past year.

The most expensive hat in the 10-piece collection comes from Philip Treacy OBE; the black creation features an asymmetric wave design and protruding feathers, with a dash of floral colour. 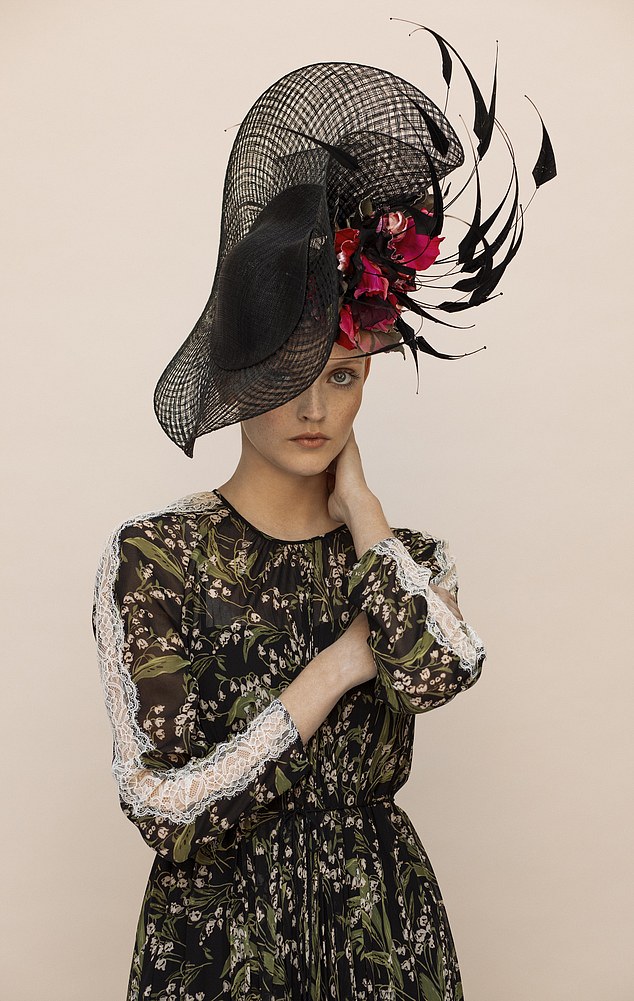 The most expensive hat is by Philip Treacy OBE – Feather Wave, £4,550. The design this year reflects the global circumstances. He said: ‘It’s dramatic, impactful but hopeful. Hats are fun and can take you away from the seriousness of life’ 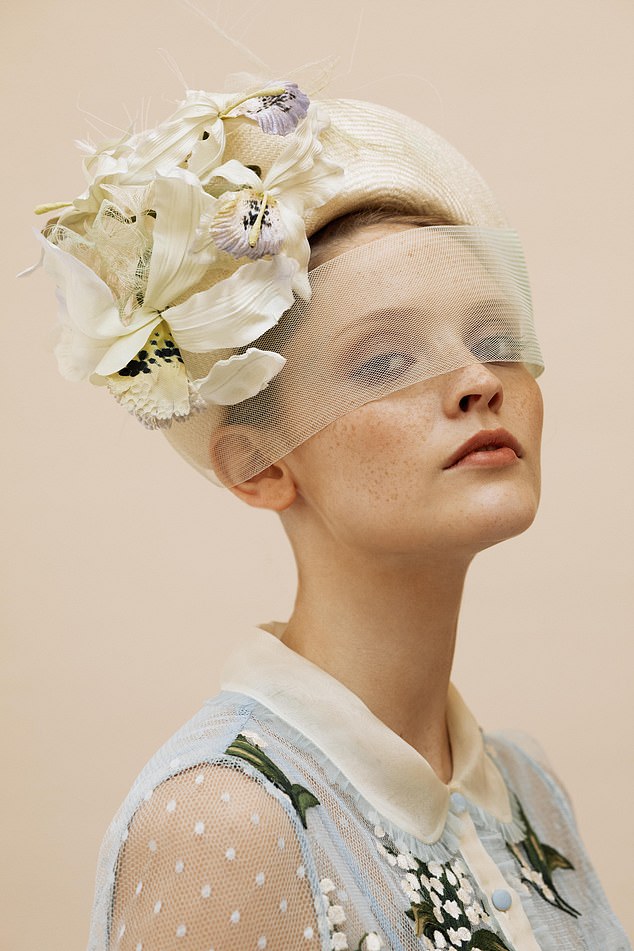 Jane Taylor’s Porcelain Crescent Moon, £1,490, is a collaboration piece featuring a unique Jane Taylor shape made in a fine vintage natural straw, adorned with handmade orchids and a soft visor that sits way from the face. It was inspired by the exotic varieties of orchids displayed in the Victorian glasshouse of Kew Gardens 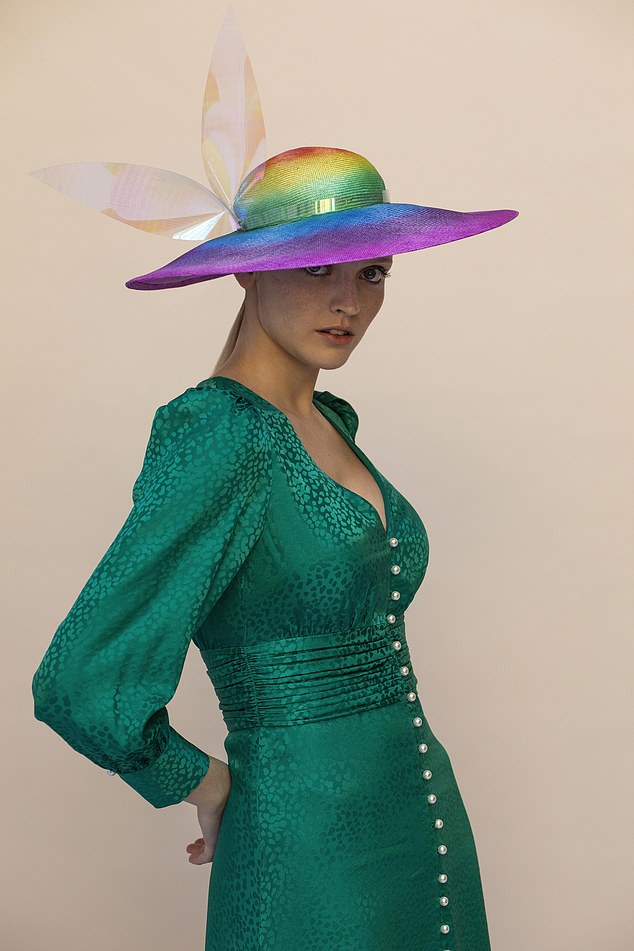 This colourful rainbow design by Julian Garner, appropriately called The Happiest Hat, £520, is designed to be worn with pride

Its maker says the design reflects the ‘global circumstances’, describing it as ‘dramatic, impactful but hopeful’ and able to ‘take you away from the seriousness of life’.

It also features a peach floral teardrop headpiece by Juliette Botterill, priced at £620, inspired by English rose gardens and showcasing luxurious fabrics to create ‘a timeless piece that is quintessentially British’.

The least expensive offering is a £390 tall navy offering from Stephen Jones OBE, called Cumulus, described as an ‘expression of fashion fantasy to put you smack back in the middle of the Royal Enclosure at Royal Ascot’.

That is followed by a £425 Beverley Edmondson hat called Summer Meadows, a classic straw braided, wide-brimmed creation with hand-embellished woven flowers to represent ‘the merging of nature and high fashion’. 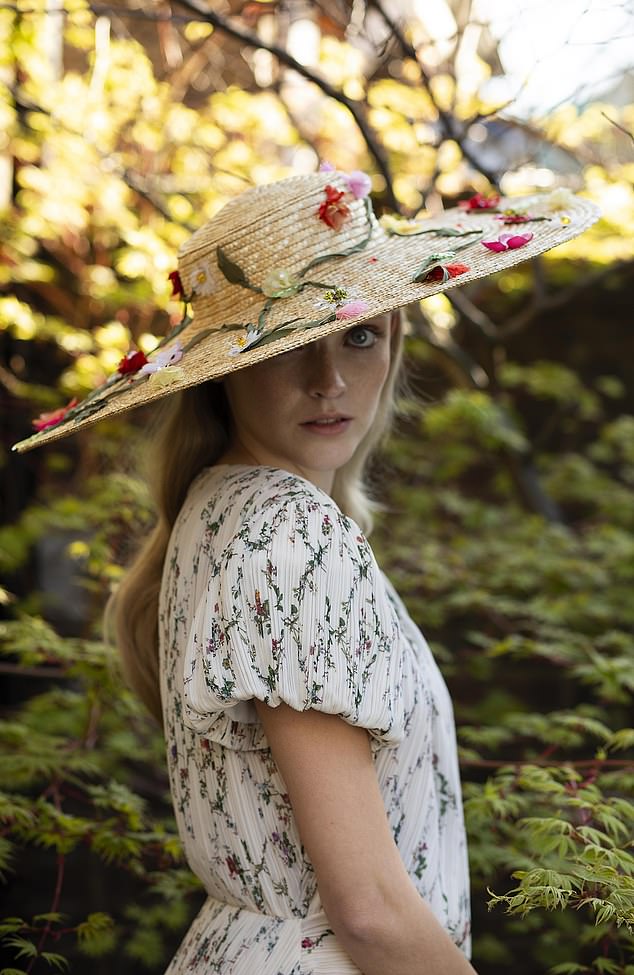 Beverley Edmondson’s Summer Meadows hat, £425, represents the merging of nature and high fashion in an appreciation for everything nature has to offer, especially as many of us would have spent much more time outdoors in the last year. Using traditional straw braid millinery techniques expresses how time moves forwards but traditional skills still play their part in creating something thoroughly modern. This contrast can be applied to Royal Ascot – entrenched in heritage but leading in its showcase of modern fashion 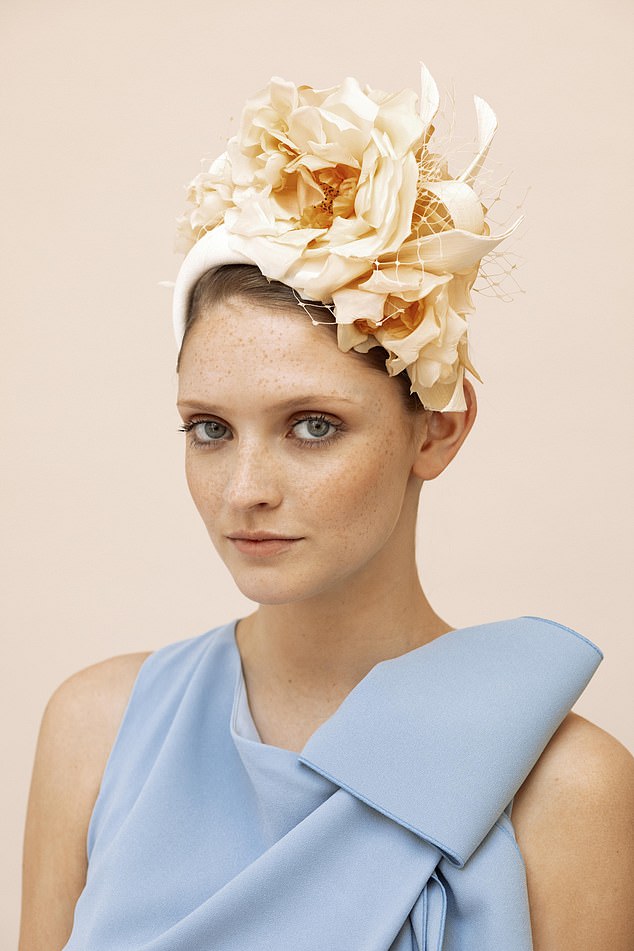 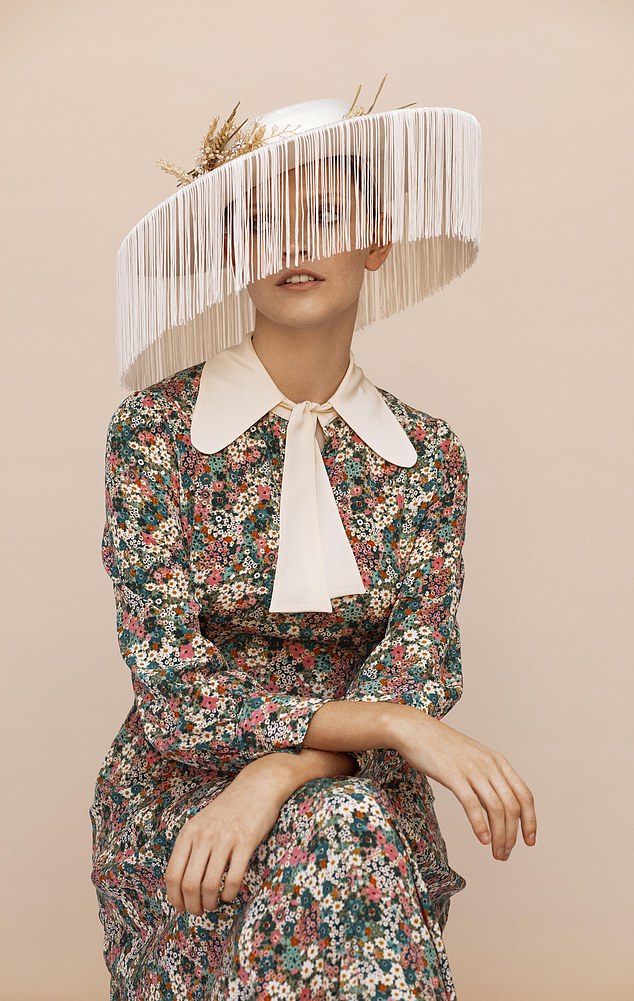 Emily London’s Demeter hat, £1,800, is inspired by nature and a fresh reset of renewed energies. She said: ‘We chose tassels for their softness and fluidity – a form to gently symbolise the natural transition between face masks and a brighter and more open future’ 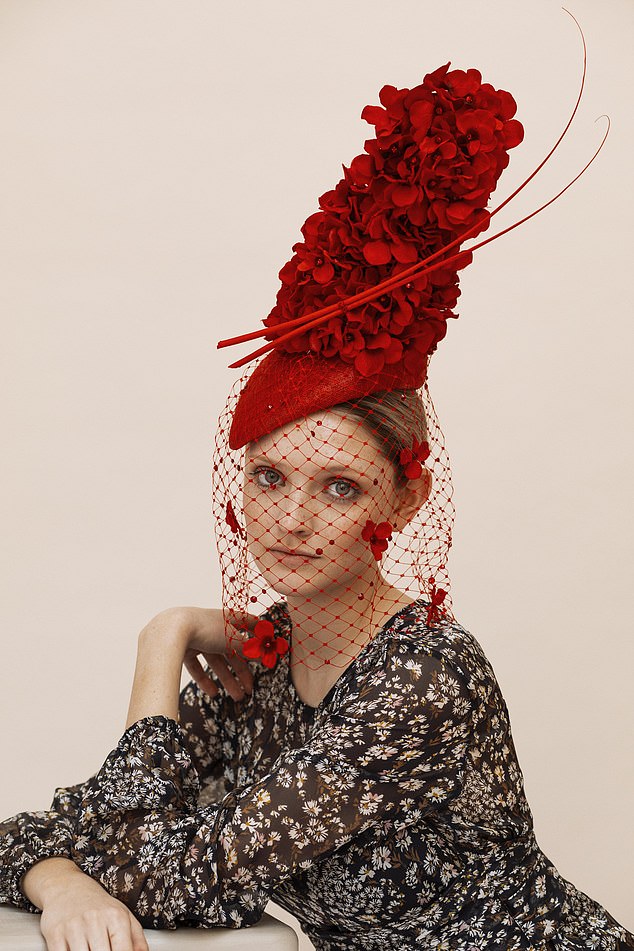 This elaborate creation by Victoria Grant, entitled Royal Enchanted Garden, £2,759, is inspired by British summertime celebrations and Buckingham Palace Garden parties, with a tower of silk flowers perched elegantly upon a straw cocktail beret, all in a rich royal red, with a crystal veil delicately adorned with flower petals and a gracious sweep of ostrich quills 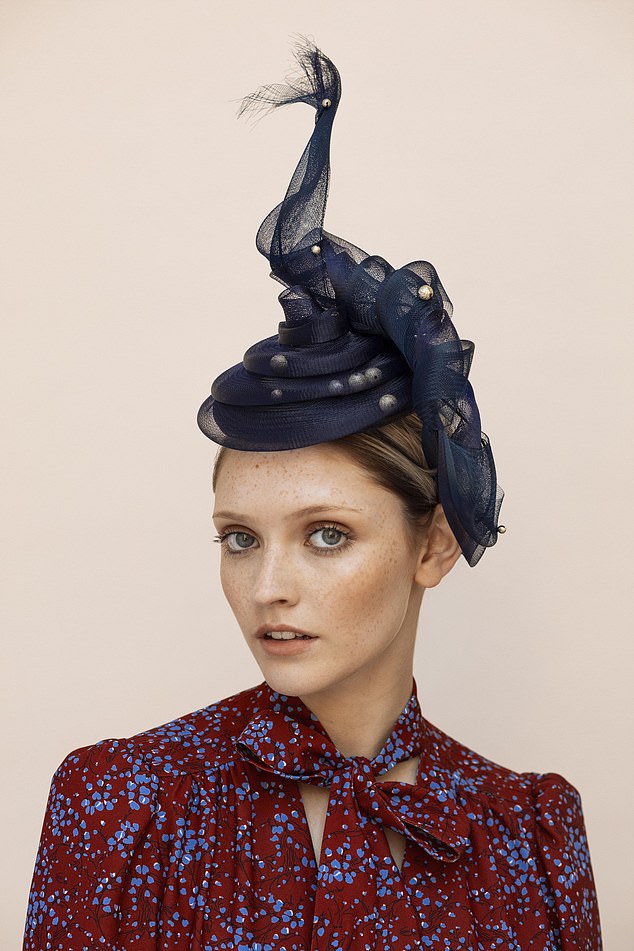 Stephen Jones OBE has designed Cumulus, £390, an expression of fashion fantasy to put you smack back in the middle of the Royal Enclosure at Royal Ascot, where we haven’t been for a long time

And singer Sia would likely approve of Emily London’s ‘lightshade’ style hat (£1,800) where soft, fluid tassels fall from the brim to ‘gently symbolise the natural transition between face masks and a brighter and more open future’. 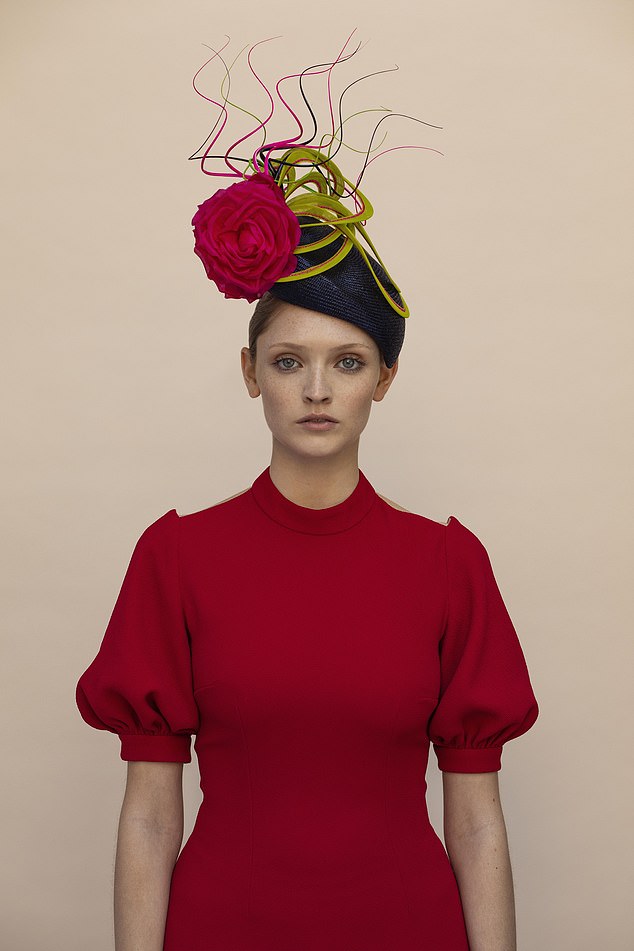 Rosie Olivia’s Azura, £715, is a colourful, eccentric yet beautiful straw creation adorned with silk roses and curled quills which makes this hat stand out from the crowd 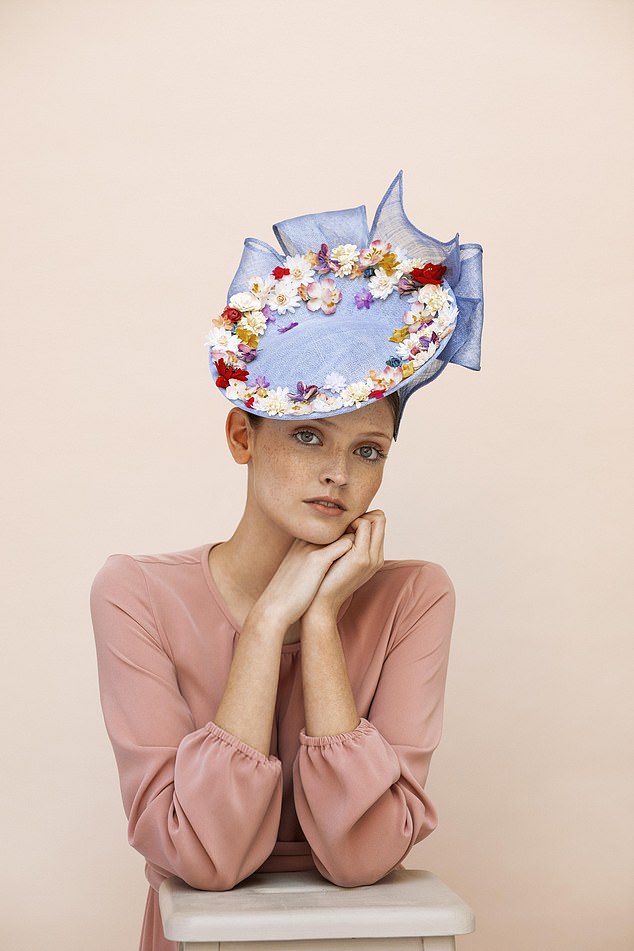