Kim Kardashian ‘wants to make things work’ with ex Kanye West, despite filing for divorce in February, a source tells HL EXCLUSIVELY. Just days ago, the reality star turned heads by wearing a white wedding dress to his ‘Donda’ event.

Despite divorce papers on the table, Kim Kardashian, 40, and her estranged husband Kanye West, 44, may not be over for good. “Kim and Kanye have been trying to work things out. Kim wants to make things work, especially for the kids, and still has love for Kanye,” an insider close to the superstar couple tells HollywoodLife EXCLUSIVELY just says after Kim wore an eyebrow raising white Balenciaga wedding dress during Ye’s Donda Chicago listening event.

“They are putting on a united front and are committed to trying to stay together — not sure if that means she will withdraw the divorce papers but they’re taking it day by day,” the source also added. Fans went wild for Kim’s appearance at the third Donda event, which marked the first she actually participated in. The SKIMS founder stunned in a long veil as she walked out during “No Child Left Behind” — the final song of the night — to join Kanye on the massive Solider Field.

Prior to the Chicago event, Kim attended the back-to-back Atlanta listening parties at Mercedes-Benz Stadium with their four kids North, 8, Saint, 5, Chicago, 3, and Psalm, 2, as a show of support. Notably, Kim matched Kanye’s Balenciaga ensembles each time (red for the first, all black for the second, and another black for the third Chicago show).

Ahead of her appearance in his native of Chicago, Kim and Kanye were spotted having a kids-free lunch in Malibu on Aug. 19. The outing marked the first solo outing of the pair in quite some time, allowing some fans to think ‘Kimye’s relationship could be on the mend. Beyond the daytime lunch date, the wedding dress seemed to symbolize that their relationship could be back on track. 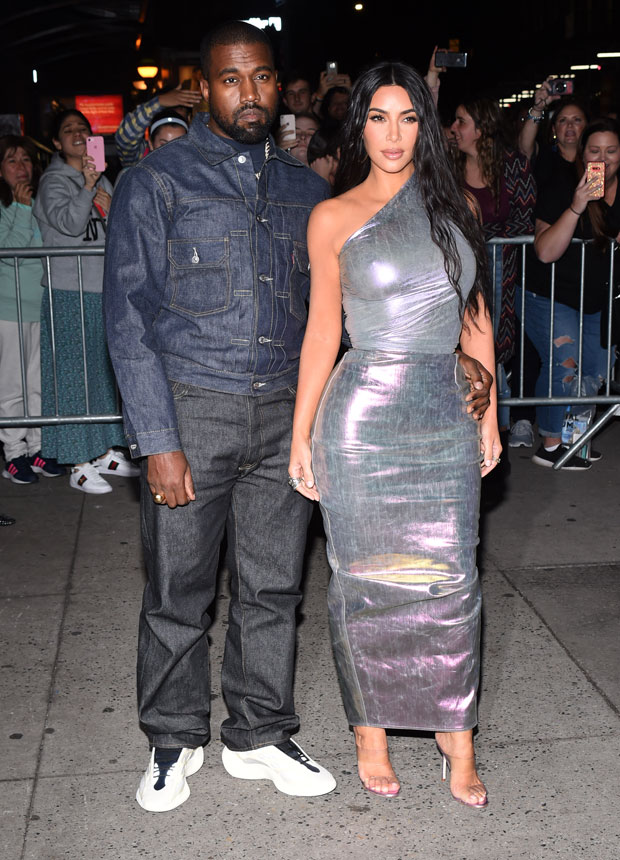 Kim filed for divorce from the Yeezy designer back in Feb. 2021, just months after he announced he was running for president. During the campaign, the KKW Beauty founder took to social media with a message about his mental health and bipolar disorder in response to a flurry of bizarre tweets posted by the “Flashing Lights” rapper.

“As many of you know, Kanye has bi-polar disorder,” Kim wrote back in July 2020. “Anyone who has this or has a loved one in their life who does, knows how incredibly complicated and painful it is to understand. I’ve never spoken publicly about how this has affected us at home because I am very protective of our children and Kanye’s right to privacy when it comes to his health…Those that understand mental illness or even compulsive behavior know that the family is powerless unless the member is a minor,” Kim also said at the time.

The couple originally married in 2014 after linking up romantically in late 2011. Their first daughter North, now 8, was born a year before their nuptials, which were held at the Forte di Belvedere in Florence, Italy. Since their split earlier this year, Kanye was briefly dating model Irina Shayk, 35, even celebrating his 44th birthday with her in Europe.