Australia will have no certainty around its vaccine rollout until CSL starts distributing locally-produced doses, as European authorities continue to block attempts to export internationally-manufactured AstraZeneca COVID-19 vaccines.

The government is also no longer relying on getting any more doses of AstraZeneca from Europe as CSL-Seqirus ramps up to produce 50 million doses throughout the year. 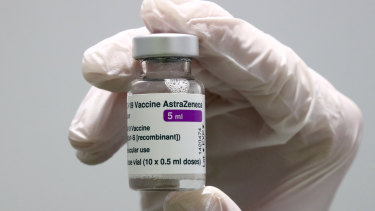 Australia was due to get 3.8 million doses of the European-made AstraZeneca in February, but Health Department secretary Professor Brendan Murphy said neither the company nor Australia knew that supply would be stymied by Europe as the continent battles ongoing coronavirus epidemics.

“It’s not been possible until now to have certainty in planning,” he told a Senate estimates hearing on Wednesday morning.

Under questioning from Labor senator Murray Watt, Professor Murphy said early projections of having 4 million people vaccinated by the end of March were based on receiving those AstraZeneca doses, plus international shipments of Pfizer’s COVID-19 vaccine.

“That was patently unachievable given that we didn’t get those international doses,” he said. “We’ve been working with Europe just about every day to try and get AstraZeneca released. It’s been a huge effort.”

On Tuesday evening, the AstraZeneca vaccine being manufactured by CSL in Victoria passed the final hurdle, after the Therapeutic Goods Administration approved the release of the first four batches – a total of 832,200 doses.

“Until we had this secure supply, every piece of advice we provide has been indicative,” he said. “Even the Pfizer doses, which have come in, fortunately, on a regular basis, have had a week to week uncertainty about [them].”

Greens senator Rachel Siewert asked how many shipment of AstraZeneca had been blocked by Europe, after Italy successfully blocked 250,000 doses bound for Australia from leaving the European Union.

Professor Murphy said the company has tried several times to get shipments released, but has not been successful.

“We continue to try the government tries is trying through various diplomatic channels but we have no expectation that we will get the additional international shipments anytime soon,” he said. “It may come at some stage later in the year but at the moment, now that we’ve got the local production, it’s less important to us.”

The reason the European Union has blocked AstraZeneca and not Pfizer shipments to Australia, was because Pfizer had been able to meet its European contractual commitments, Professor Murphy said.

“The EU have taken the view that they’ve got a raging pandemic and AstraZeneca need to meet the European commitments before they will allow exports,” he said.

Mass vaccination centres will become a larger part of the vaccine program as it continues, but the focus for the vulnerable groups in phase 1b was for those people to be vaccinated by their GP.

“It is a hybrid model,” Professor Murphy said.

Melbourne and Perth have started mass vaccination clinics already, mostly focused on critical workers, but Professor Murphy said as the rollout progresses to the general population more state and federal mass vaccination centres will be opened.