Lucian Freud, a fox in the London art world

‘‘As a child,’’ Lucian Freud told his morally diffident, intellectually incurious biographer, William Feaver, ‘‘I used to lie and steal a lot.’’

The lot included his intrusive mother’s gramophone records, as well as the gold his father kept in a desk drawer. ‘‘A spectacular theft,’’ Freud said. ‘‘Grandfather, when we were born, put gold down for each of us (his two brothers and himself). I took the lot, first mine, and then the others’ … I sort of gave the money away … it made me a bit more dangerous, powerful.’’ 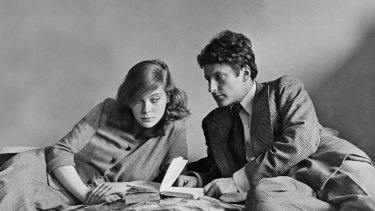 His grandfather was, of course, the great Sigmund Freud, from whom Lucian stole a book of limericks. Lucian liked him but no amount of liking ever deterred him from taking what he wanted. He appreciated Sigmund’s wisdom and lightness of touch. Feaver does not elaborate, such is his posh English touch for understated gossip, but I imagine Freud appreciated Sigmund’s response to the news of his just having seen Romeo and Juliet: ‘‘I thought you were your own Romeo.’’

‘‘This is my young animal,’’ Freud’s father, Ernst, said of him when he was trying to get him into one of the schools that left him unschooled (not the one, it seems, that he burnt down). Freud loved foxes. Indeed, as he matured, men and women found his own sexual aura as menacing as it was foxy. It thrilled him to have a wild bird in his hands; and to ride horses, especially those that leapt, like the one in Constable’s painting, or which bolted, filling him with true feeling as he carved them for a linocut.

As a small child, Freud had an extra toe on his small toe that he had removed, and he had a fang between his front teeth — ‘‘a tooth that only sharks have’’. Its removal made headlines in a dental magazine. 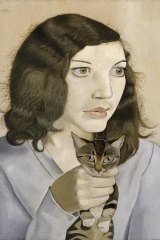 Lucian Freud’s first wife, Kitty, seen in his 1947 painting, Girl with a Kitten.Credit:

Feaver, as if sucking on a toe, or a tooth, relishes such tit-bits in the life of his priapic, sexually predatory subject, a generally neglectful father of at least 14 children born of women he loved erratically on exactly his own terms, romancing and willing himself to become London’s best painter (after Francis Bacon) by the time he was 40, all the while funded by the royalties bequeathed to him from the oeuvre of his grandfather.

That the artist who brought the West’s figurative painting to a peak, making so much that was new out of nakedness fearlessly rendered, was dependent on the life’s work of the man who wrote Civilization and its Discontents and whose genius offered us a truthful guide to libidinal instincts — this is of less interest to Feaver than tracking Lucian Freud’s happy arrival in Who’s Who by the time he was 33, which was a splendid thing for a cocky, sly spiv proudly living among criminals in the slums of Paddington.

Naturally, the family name was Freud’s passport to society, just as the inheritance was a kind of Centrelink payment. How else would he have paid his gambling debts? His dealers? His landlords? A man could not forever rely on the generosity of a Sir Kenneth Clark. Thank goodness, then, that he had an eye for heiresses, along with a talent for doing their portraits, a primal addition to his quiver of seduction techniques. 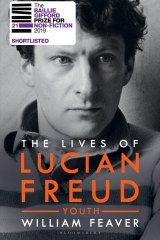 Freud married two such beauties before he was 30. He was never going to be far from other people’s money and would cling to one of his titles until well after the marriage had dissolved.

His portraits loom revealingly. They uncover what may be learnt from psychoanalysis: one’s disposition towards masochism/sadism, as well as the swoon and the anxiety to be had from possession. Plus the delirium that goes with omnipotent ‘‘surveillance’’ — Freud’s famous adjective for the kind of concentration needed to paint a person, stripping them bare, whether they liked it or not.

From the first, his women seemed to be objects of captivity, fixed by his powers of scrutiny, almost as dead as the monkeys and other dead creatures he had painted at the start.

So: there was the startling portrait of black-haired Kitty, his first wife, who seems to be about to strangle her kitten. And there are the unforgettable renditions of his second wife, the blonde, blue-eyed Caroline, who is prone in a hotel room in Paris, observed by a svelte Freud. 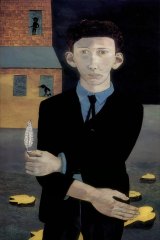 Lucian Freud’s self-portrait Man with a Feather, which he painted in 1943.Credit:

The pictures exude misery, entrapment, of the man as well as the woman. They are inexplicably chilling. There’s no key to them until chatty Feaver tells us that Freud became unhappy with his depressed young wife and locked her out of the room, naked. Well, no surprise there.

But you need a moral order informing a text to pull such a welter of things together. Feaver lacks this, even when he tries to place Freud in the context of Holocaust, and what that did to our ‘‘perceptions’’ of naked bodies. He seems as shy of history as he is of the visceral activity of painting that involves the matter of paint. Nor does he reflect much on the animals, and the animals close to human bodies in the paintings.

Listening to his voice over many days in the headphones of the 2002 Tate retrospective, which he curated, you could hear his struggle for words as bold as what he was looking at. Incongruously, it was an airy, disembodied voice.

Feaver does, however, write well of many paintings, and he skilfully places Freud in the company of his artistic rivals, the enemies. He is descriptively judicious, and he takes us as far as the show-stoppers Freud was turning out by 1968, overtaking Bacon as the latter was in relative decline, and as big money of his own was coming in. Freud was also painting more freely, stealing Bacon’s raw expressionist flair, while having, as his friend Frank Auerbach remarked, ‘‘no safety net of manner’’.
The compulsive riskiness was paying off.

The work defied those who could hardly stomach his audacity including, it must be said, the boldest and most naked of self-portraits ever done by a major artist — which Feaver tends to skip past, his London-orientated gait compulsive. Maybe his second volume will give us more of what we need. So far, the best books for grappling with Lucian Freud have been written by the outsiders, Robert Hughes and Sebastian Smee.

a, Fox, Freud, In, lon, Lucian, the
Celebrities