A music known for simple, even spare songwriting can sound either stripped down or overwrought when performed live. Mac DeMarco managed to do no neither when he played Festival Hall, where he instead showed off the coloured subtlety to his work.

Starting with On the Level, DeMarco reeled his audience in, like the line of his mic he kept twirling in the air and catching.

Within minutes the crowd was undulating on waves of summery musical pleasure. It doesn’t hurt that with six albums under his belt, DeMarco has a deep pool of well-crafted and well-loved songs to draw from. 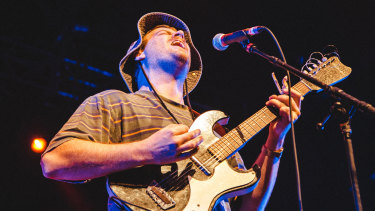 Mac Demarco reels in the crowd at Festival Hall.Credit:Rick Clifford

The crowd was young, inner-city but not relentlessly so – a bit understated like DeMarco’s music. They roared with approval with the first few notes of each song they recognised. As fans sang along and DeMarco encouraged them to, it was clear that so many had weaved their personal experience around the meaning of the words.

The strength of DeMarco’s music is unadorned songwriting. But his flair is for coming at the effort from so many fresh and improbable angles and styles. A single chord recasts what could be a conventional jangle into something more subversive, memorable and modern.

Here Comes the Cowboy, the song and name of his latest album, took on hues of menace and irony performed live.

DeMarco, dressed in a loose T-shirt and a bucket hat, meandered on the stage almost like a guy you would expect to meet at a barbecue. Between sips from a North American-style red plastic party cup, DeMarco joked with the audience. He negotiated with the crowd over the direction of the show. (“Just a few more quiet ones, then we’ll do the kill-your-parents punk rock stuff.”)

DeMarco was backed by a versatile band who did a remarkably breezy version of My Old Man, with a jazz keyboard backing that hinted heavily everything would be all right in the world.

The evening advanced as promised, from “quiet” to a “full-throttle” rocking affair, as the party spirit took over. No matter how freewheeling and effortless he made it seem, the sounds remained balanced, in control – at least until the end – when he unleashed the power chords.

Like DeMarco’s signature mic toss, the concert made a great arc in the air before landing with satisfaction just where it should.