Home » Lifestyle » Marvel’s Avengers game is ‘making your own film’

Marvel’s Avengers game is ‘making your own film’

Thor spins his hammer Mjolnir, and smashes a robot from outer space to smithereens.

He’s defending planet earth, a job he’s been doing for nearly 50 years in comics, on TV and – most notably recently – in films.

But this time, the Thor on screen looks and sounds a bit different. And he’ll behave differently depending on who’s playing.

Because this isn’t the movies. It’s a new game featuring the Avengers.

But according to the actor bringing Thor to life for it, this isn’t just a poor imitation of the hugely successful Marvel blockbusters.

Travis Willingham tells Radio 1 Newsbeat: “To me… it’s making your own film.

“Rather than just being in a sort of passive viewer perspective.” 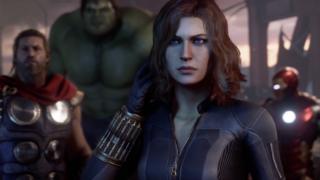 Black Widow, famously played by Scarlett Johansson in the movies, is performed in this game by Laura Bailey.

And for her, the main difference between the two versions is choice.

“You get to embody these heroes,” she says. “You get to feel like you are them – but they get to be the version you want them to be.”

Travis and Laura are sharing a sofa in their home in California – they’re chatting to us online.

Because – plot twist – in the real world, Black Widow and Thor are married.

“What does it feel like to be sitting next to a god?” jokes Travis to Laura in his Thor voice.

He says he’s not bored of the inevitable comparisons with the hugely successful movie franchise.

“I love what Chris Hemsworth did as Thor,” he says.

“It would be a lie to say that I didn’t use that as a starting point for the character.

“He could have been very gruff or very aggressive – instead he made him a very real, relatable character, with very apparent weaknesses and strengths.

“I have the movies on all the time!”

When the game was originally announced, the characters were criticised by some for looking like quite bland versions of the iconic superheroes.

But behind the animations is a cast of actors made from gaming royalty.

From Nolan North (who plays Nathan Drake in the Uncharted series) and Troy Baker (famous for playing Joel in The Last of Us) to Travis and Laura.

Travis recently played Kingpin in Spiderman and Laura’s been heralded for her performance as Abby in the Last of Us 2.

They also have a long history of performing these roles in previous games, from mobile titles to Lego versions.

Developers are hoping these new versions of the characters will appeal to Marvel fans.

The game’s played from a third person perspective, and as with titles like Destiny 2 or The Division, it wants players to work through missions to keep improving their chosen character’s abilities, gear and powers.

Reviews so far have been mixed.

Some critics are frustrated at the lack of variety in the gameplay and technical issues, while at the same time being impressed at the performances and some of the cinematic moments in the game.

Travis and Laura they hope it will find an audience keen for more Avengers action.

“There’s no way we were going to be able to be what the movies are,” says Laura.

“We’re making a completely different story, and it’s great to be breaking off in that way.”

“I think that’s refreshing for an audience that knows Marvel to know there are new rules, new dynamics and new things to learn about and investigate.”