Matilda’s magic star! How car exec’s triple-threat daughter Alisha Weir, 13, landed a bit part on Ireland’s Dancing With The Stars before being plucked from obscurity for the film – as critics hail her ‘one to watch’ in rave reviews

You may not have heard of her yet, but 13-year-old Alisha Weir looks set to soon become a household name – thanks to her starring role in the screen adaptation of Roald Dahl’s Matilda The Musical.

Alisha – who was plucked from relative obscurity to play Matilda Wormwood, a schoolgirl with a vivid imagination who dares to take a stand and turn her wildest dreams into a reality – was raised in the Knocklyon area of Dublin.

She was born on September 26, 2009, to her parents Jenny Weir and Mark Weir, Managing Director of Dublin car dealership Vector Motors, who have been married 24 years. The family is full of talented individuals, with both her older sisters performing on stage.

Sister Katie Weir went to Urdang, a performing arts academy based in Islington, London, and has featured in several Dublin Panto productions and performed as part of an Opera group in arenas around the UK and Ireland.

In 2018, Katie and Alisha both enjoyed a stint on Irish TV together when they appeared on Donncha’s Two Talented, which sees talented children teaching adults.

Alisha – who critics have hailed as the ‘one to watch’ in rave reviews – won the coveted role of Matilda when she was an 11-year old drama student with little professional experience to speak of, following an ‘unforgettable audition’, according to director Matthew Warchus. 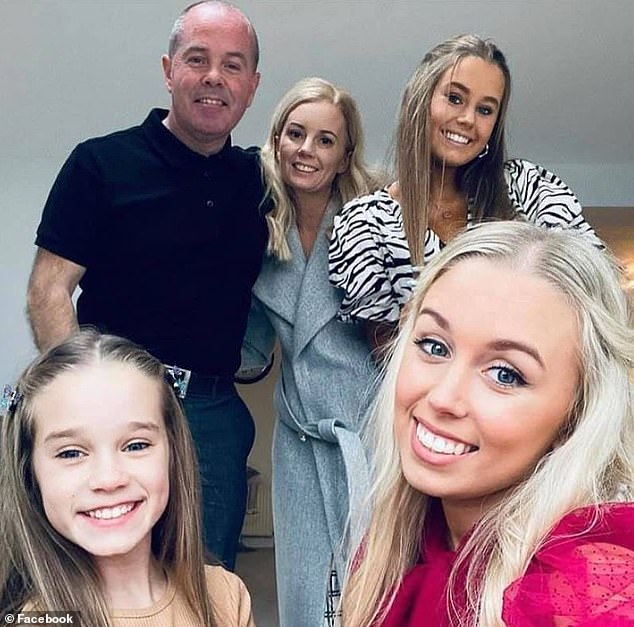 You may not have heard of her yet, but 13-year-old Alisha Weir (pictured bottom left, with her family) looks set to soon become a household name – thanks to her starring role in the highly praised screen adaptation of Roald Dahl’s Matilda The Musical 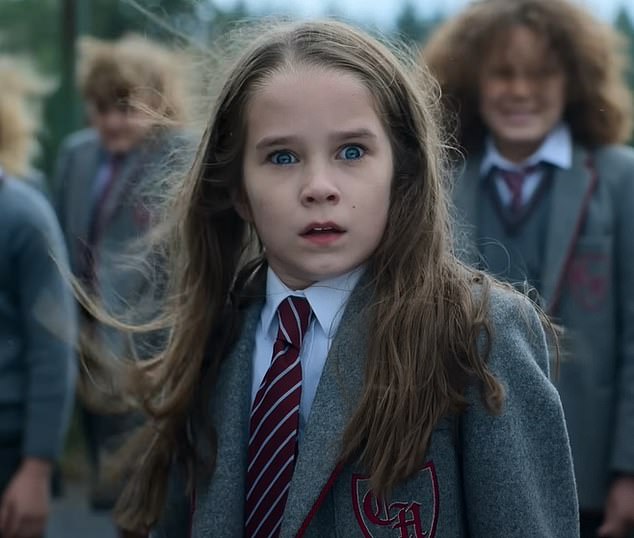 Alisha – who was plucked from relative obscurity to play Matilda Wormwood (pictured), a schoolgirl with a vivid imagination who dares to take a stand and turn her wildest dreams into a reality – was raised in the Knocklyon area of Dublin 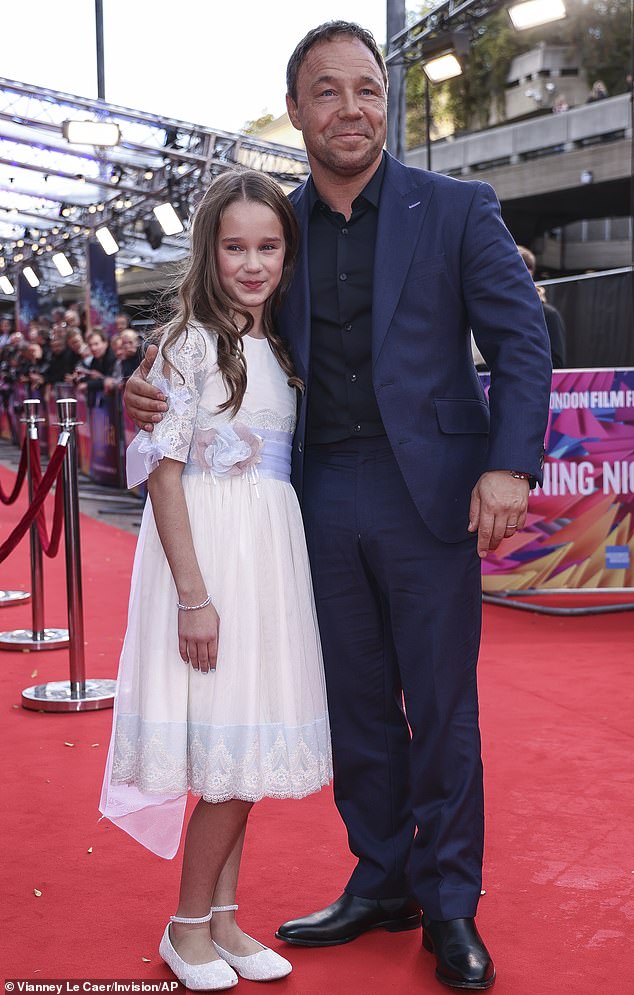 Alisha (pictured with co-star Stephen Graham) won the coveted role of Matilda when she was an 11-year old drama student with little professional experience to speak of, following an ‘unforgettable audition’, according to director Matthew Warchus 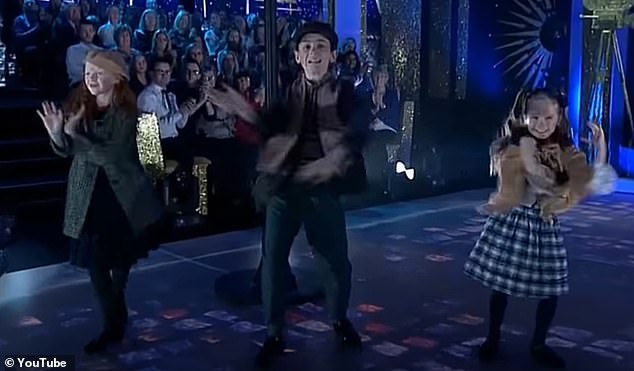 Before stepping into Matilda’s shoes, the young performer featured in a rendition of Trip The Light Fantastic on Dancing With The Stars Ireland (pictured, right)

Before stepping into Matilda’s shoes, the young actress and singer had previously appeared on Ireland’s The Late Late Toy Show, in which she performed a rendition of Cyndi Lauper’s True Colours, and Once the musical at Dublin’s Olympia Theatre.

There has also been a brief appearance on mainstream TV, with the young performer featuring in a rendition of Trip The Light Fantastic on Dancing With The Stars Ireland.

The film – based on Roald Dahl’s beloved book – kicked off the 66th edition of the London Film Festival on Wednesday, two months before its cinematic release, and has received rave reviews from critics. 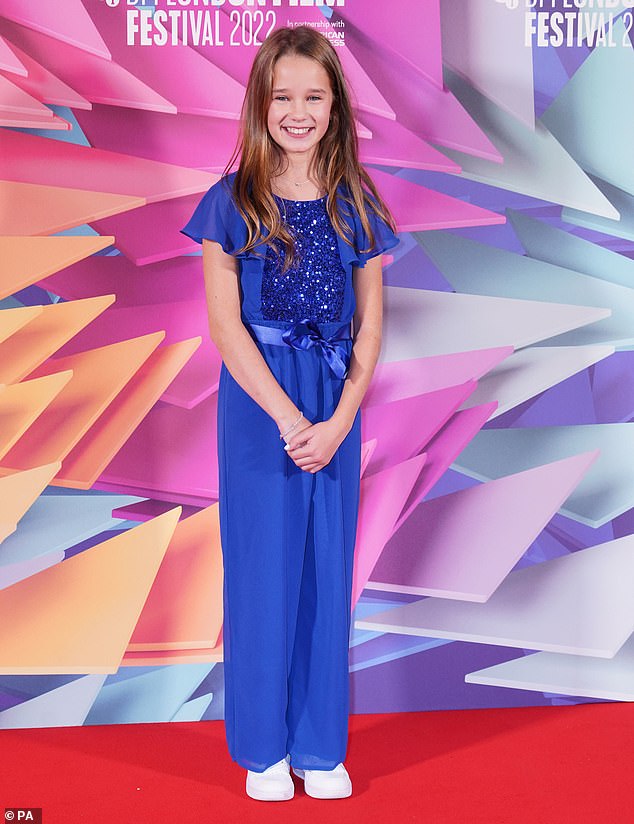 Special moment: Young actress Alisha made the first significant red carpet appearance of her career at the photocall and press conference for new film Roald Dahl’s Matilda The Musical, in which she plays the lead, on Wednesday 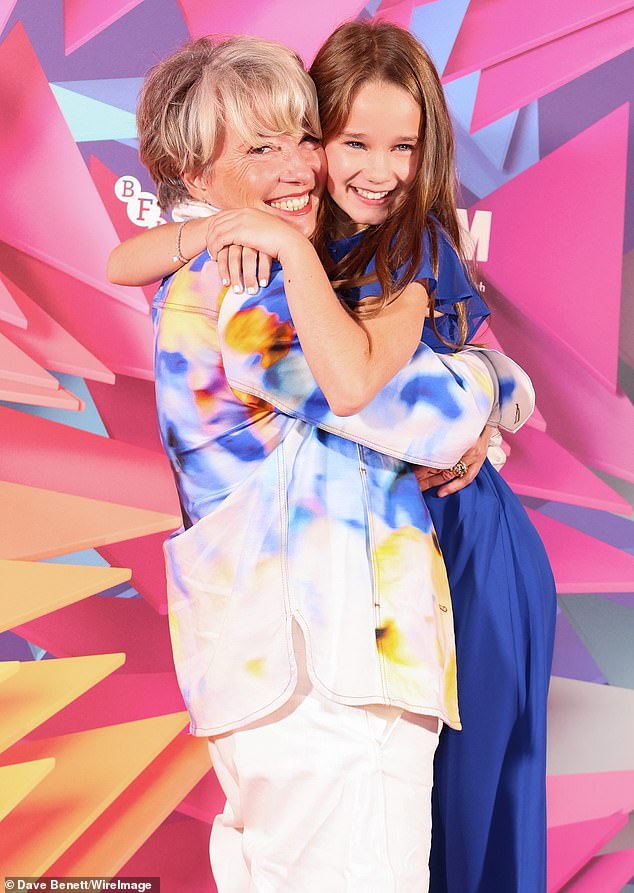 Inseparable: Dame Emma Thompson greeted young co-star Alisha with a warm hug as they attended a photocall and press conference for the new film in London on Wednesday afternoon

Critics say ‘Alisha Weir is one to watch’ and film was ‘a joy from beginning to end’: The reviews are in for Matilda The Musical

‘Like Dahl’s book, everything in this film, from tenderness to terror, is so exuberant,’ writes Robbie Collin.

‘I’m sticking my neck out, but I reckon it would even have delighted the notoriously dyspeptic, hard-to-please Dahl himself,’ says Brian Viner.

‘Matilda is a tangy bit of entertainment, served up with gusto. Like the Wotsits and the Curly-Wurly shown in various scenes, it’s pretty moreish,’ writes Peter Bradshaw.

Arriving at the movie’s premiere at the BFI London Film Festival, Alisha said all of the big name cast were her heroes.

She said: ‘It was my first ever big film, it was just amazing and I was quite nervous but they made me feel so welcome. I was watching everything they were doing so I can be like them as well.’

Speaking about her reaction to getting the role, she said: ‘I was just so stunned, I started crying and I was just so happy and grateful.

‘Growing up I have always loved Matilda, it has just always been one of my favourites. I just can’t believe it, I don’t know when it will sink in but it’s mad to think that I’m Matilda.’

He told followers: ‘MASSIVE NEWS!! Absolutely over the moon to finally announce that my Drama Student Alisha Weir has landed the title role of ‘Matilda’ in the Roald Dahl Netflix production of Matilda!! So so proud!’

The agency previously appeared to foreshadow the trajectory her career might take by publishing a glowing report in 2019, in which her vocal performance was described as ‘very clear’ and ‘perfectly in tune.’

Posting on Instagram in January 2021, she wrote: ‘I am delighted to be playing the role of ‘Matilda’ in Matilda the movie musical which will be on Netflix.

‘I am so excited to get started !!! Thank you so much to everyone for all your nice comments. I am so happy.’

Matilda director Warchus recently admitted the part as a ‘huge role’ for Weir, but she earned it on merit following ‘an unforgettable audition.’ 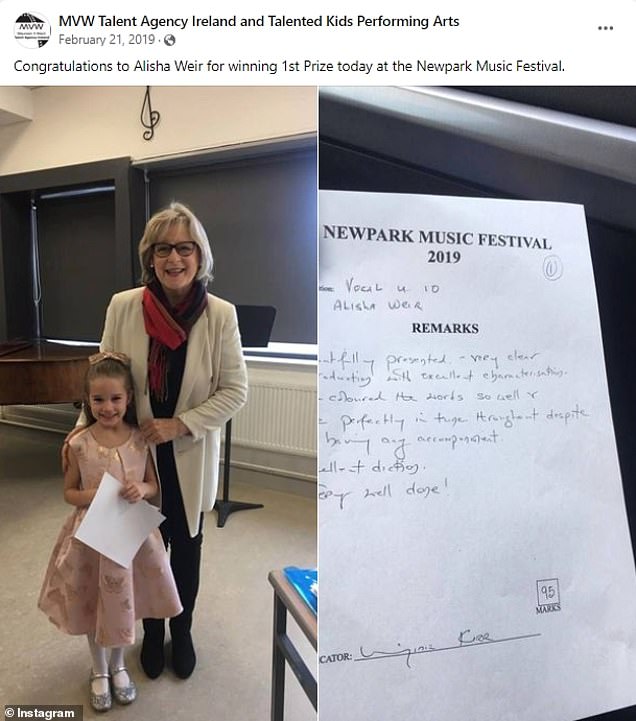 Our girl: Maureen V Ward Talent Agency Ireland, an extension of the successful Talented Kids Agency Ireland, represent the actress and appeared to foreshadow the trajectory her career might take by publishing a glowing report in 2019 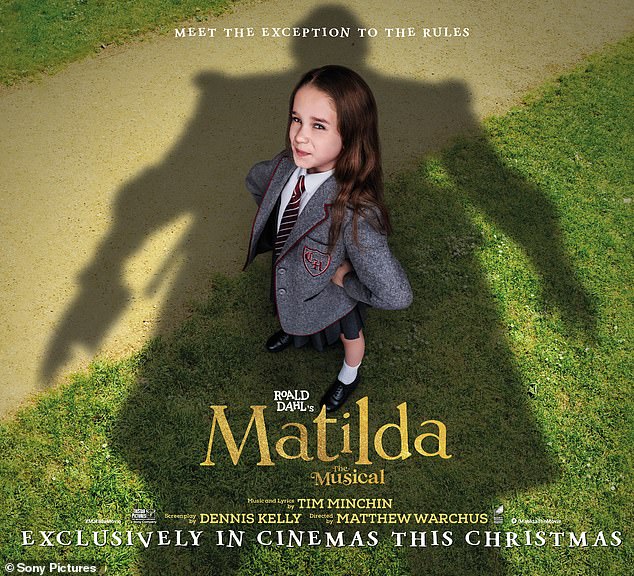 Of the new production, he added: ‘Matilda will be an imaginative and fresh retelling of the award-winning musical, Matilda, featuring talented young newcomers, alongside established stars.

‘I look forward to introducing this beloved and powerful story to a new generation of fans around the world.’

The original 1996 film of Matilda, based on Dahl’s 1988 novel of the same name, starred Welsh actress Pam Ferris as the formidable Miss Trunchbull while Danny DeVito, Rhea Perlman and Mara Wilson also featured.

It was later adapted for the stage by screenwriter Dennis Kelly with an initial run by the Royal Shakespeare Company at Stratford-upon-Avon starting in November 2010.

A year later in 2011, the musical had its West End premiere with the Broadway debut following in 2013.

The film is due out in UK cinemas from November 25.

This magical Matilda is pitch perfect… even Roald Dahl would be delighted: BRIAN VINER’s five-star review of Matilda The Musical

Nobody knew better than Roald Dahl that his genius for storytelling did not always transfer to the silver screen, even if he was pretty much alone in hating the 1971 film Willy Wonka And The Chocolate Factory.

Inspired by his novel Charlie And The Chocolate Factory, the movie he thought irredeemably ‘crummy’ has become a much-loved classic.

And now Matilda The Musical fully deserves to join it in the pantheon of great children’s films. I’m sticking my neck out, but I reckon it would even have delighted the notoriously dyspeptic, hard-to-please Dahl himself.

Last night’s world premiere was also the curtain-raiser to this year’s London Film Festival, and rarely has the LFF got off to such an exhilarating start.

Matilda The Musical is a joy from beginning to end, exquisitely written, acted and choreographed, and an early indication that the streaming giant Netflix did not overpay last year when it forked out an eye-popping $500million (£440million) for Dahl’s back catalogue. The film was adapted from the monumental West End and Broadway hit, but that isn’t always a recipe for success on screen either. 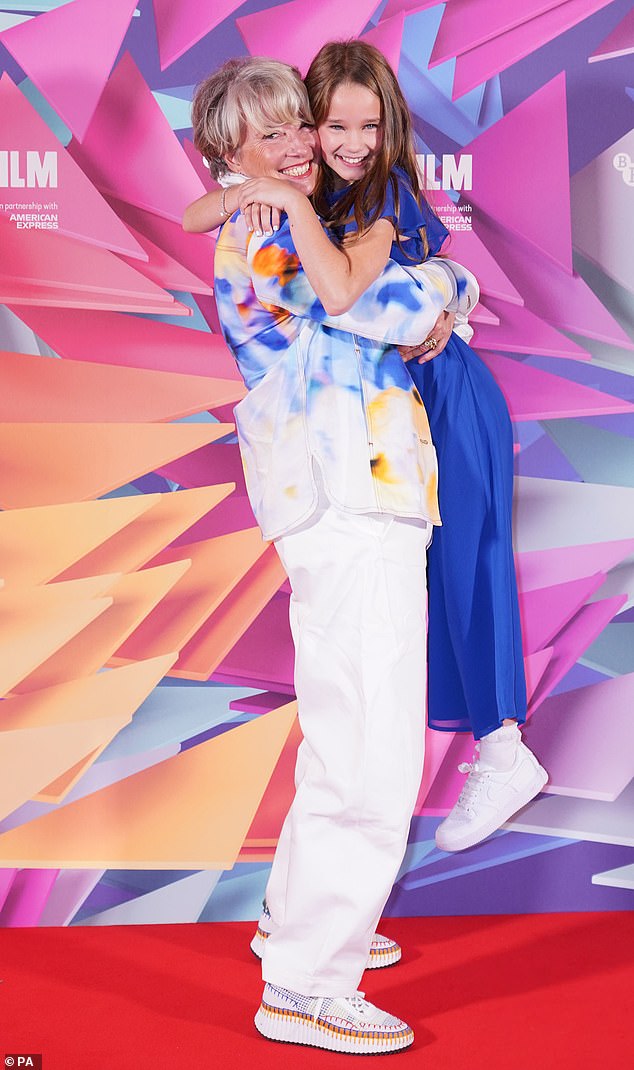 Moreover, director Matthew Warchus is the man who adapted Dahl’s novel for the stage in the first place, and the words, music and lyrics are by original writers Dennis Kelly and Tim Minchin, so there might easily have been a constraining theatrical feel to the enterprise.

Instead, Warchus uses the camera to give the story, about a girl prodigy who uses telekinetic powers to outsmart an evil headmistress, a whole new energy. It works gloriously on screen.

Helpfully, all the children are splendid and little Alisha Weir, the Irish newcomer in the title role, is a real find. She is terrific, and moreover looks exactly right.

Matilda mustn’t be too winsome. For all her goodness, she has a proper devilish streak. Young Alisha captures that perfectly.

Imagine being only 13 years old and not being remotely upstaged by Stephen Graham and Andrea Riseborough, both an absolute hoot as Matilda’s appalling, boorish parents, or even by the great dame herself, Emma Thompson. 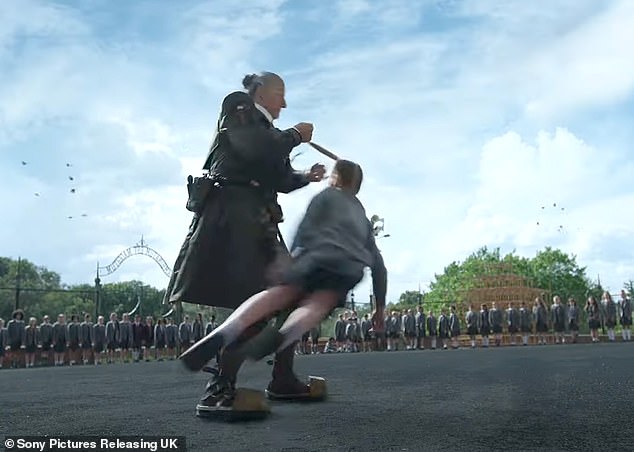 ‘Helpfully, all the children are splendid and little Alisha Weir, the Irish newcomer in the title role, is a real find. She is terrific, and moreover looks exactly right.’ Pictured: Emma Thompson as Miss Trunchbull

With broken veins, discoloured teeth, a hairy chin, shelf-like bosom and enormous black bovver boots, Thompson plays the monstrous head, Agatha Trunchbull, as a kind of (vaguely) female Benito Mussolini, strutting around her empire striking fear into the hearts of everyone who dares meet her dreadful glare – except Matilda. It is one of the great scene-stealing roles (played in the 1996 non-musical film version by Pam Ferris) and is rumoured to have been offered first to Ralph Fiennes.

But Thompson, as you might expect, grabs the opportunity every bit as firmly as Miss Trunchbull, the English hammer-throwing champion of 1959, once held the hammer.

The role of Miss Honey, the loving, sympathetic teacher who persuades Matilda’s awful parents to let her go to school, is in some ways a harder character to play convincingly, but Lashana Lynch, a Bond girl in last year’s No Time To Die, does a grand job. Are we allowed even to say ‘Bond girl’ any more, by the way? 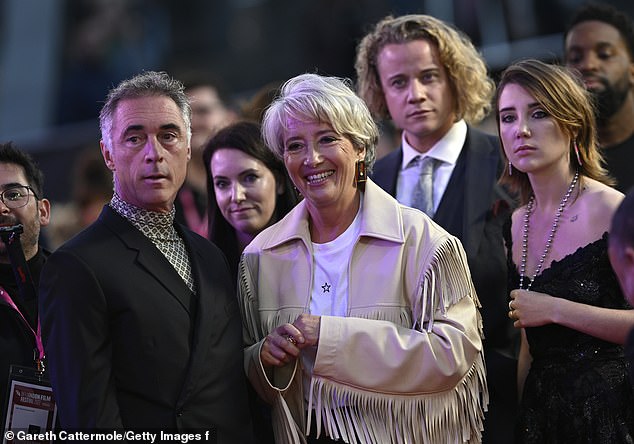 ‘Three cheers to everyone involved, but perhaps above all to Roald Dahl, who in dreaming all this up, gave other amazingly creative people the chance to build on his mighty legacy.’ Pictured: Emma Thompson, husband Greg and daughter Gaia at the premiere

It is tricky to pick a favourite song or favourite scene; they are all so witty, so pleasing on the ear and the eye, with occasional echoes of another wonderful film musical, Carol Reed’s Oliver! (1968). But if I had to choose, it would be Miss Trunchbull’s demonic spelling test, followed by her crypto-fascist anthem, The Smell Of Rebellion.

Three cheers to everyone involved, but perhaps above all to Roald Dahl, who in dreaming all this up, gave other amazingly creative people the chance to build on his mighty legacy.

Matilda The Musical opens in cinemas on November 25, and on Netflix in December.