Meghan and Harry are ‘very excited’ about split from royal foundation

Meghan and Harry are ‘very excited’ about launching charity projects that reflect their personalities ‘on a global scale’ after splitting from the Cambridges, royal expert claims

The Duke and Duchess of Sussex are reportedly ‘very excited’ about the launch of their own foundation following their split from the Cambridges.

Writing in Harper’s Bazaar, royal commentator Omid Scobie said that Prince Harry, 34, and Meghan Markle, 37, were looking forward to ‘stamping their own personality’ on their charity work.

A palace source told Scobie: ‘Their operating style is very different to the Cambridges and so having their own space to think as big as they like, working on a global scale, is perfect for them.’

It was revealed yesterday that Prince Harry and Meghan will formally split from their joint charity with the Duke and Duchess of Cambridge and set up their own foundation. 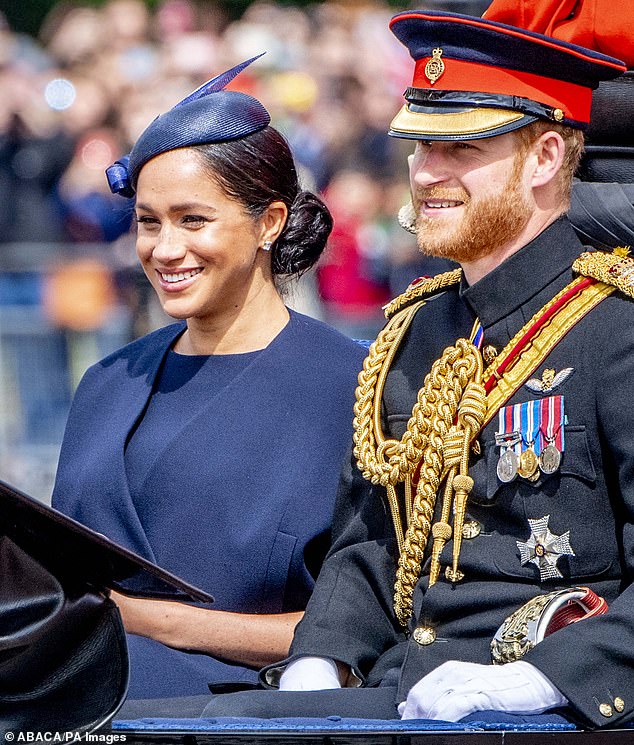 Prince Harry, 34, and Meghan Markle, 37, are said to be ‘very excited’ about the launch of their own charitable foundation, which they hope to have up and running by the end of the year

It follows claims over the past year of a rift, first between Kate and Meghan, and then between future king Prince William and his younger brother, Harry.

Royal sources denied the changes were linked to these claims – saying it was ‘largely about preparing both couples for their future roles which are obviously on divergent tracks’ – but many will see it as part of the ongoing distance between the couples.

It is reported that work has already ‘swung into action’ on Prince Harry and Meghan’s new foundation, and that they are hoping it will stand the test of time.

Despite being on maternity leave until the autumn, Meghan is expected to work closely with a team as she and Harry outline what their new organisation will look like. 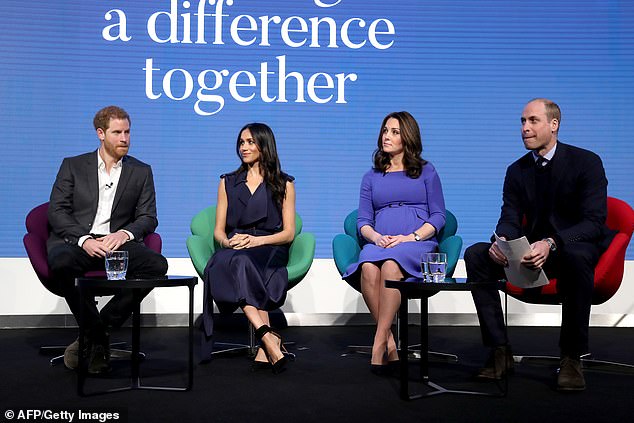 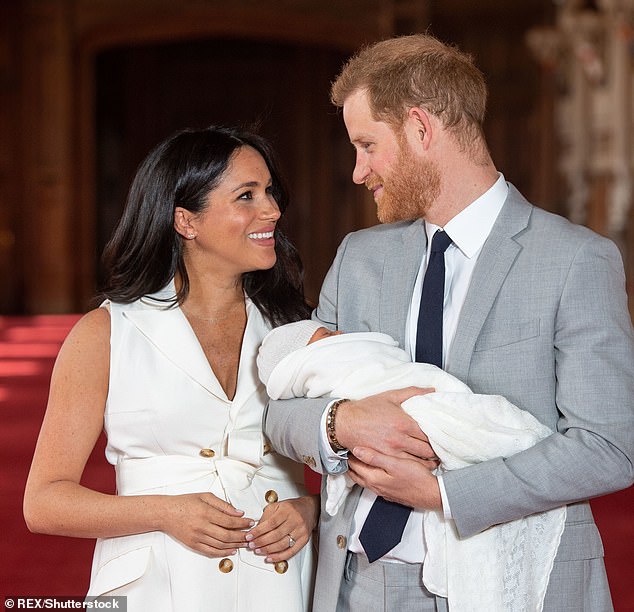 The royal couple are said to be excited to ‘stamp their personality’ on their own charitable foundation (pictured here with baby Archie, who was born in May)

The royal couple are believed to be aiming for the new foundation to be up and running by the end of the year, and are reportedly ‘very excited’.

A palace source revealed:’This is their chance to stamp their own personality on their charitable work.’

William, Kate, Harry and Meghan’s joint Royal Foundation venture was intended to harness the star power of the four high-profile royals, but it lasted just 16 months.

While working with the Royal Foundation, Meghan took on her first charitable project, Meghan’s Hubb Community cookbook, which raised money for those impacted by the tragedy at Grenfell Tower. 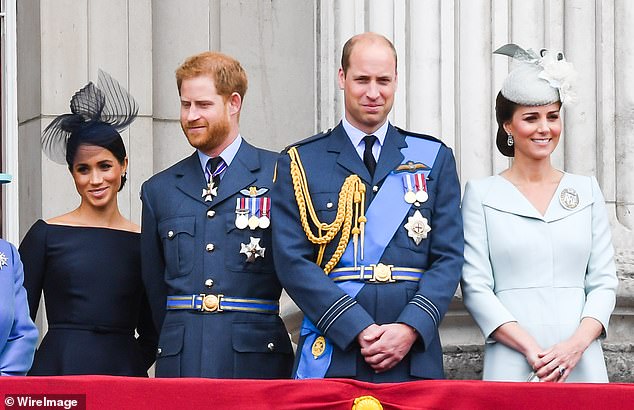 There has been speculation over the past year of a rift between the two couples, first between Kate and Meghan, and then between William and his younger brother, Harry (pictured on the balcony of Buckingham Palace to view a flypast to mark the centenary of the Royal Air Force in July 2018)

There is speculation Meghan and Harry could be looking to work overseas possibly in the duchess’ homeland of America, and Africa, a continent Harry is passionate about where his Sentebale charity is based.

A source said the couple’s future charitable projects, like those of William and Kate, are likely to have a ‘global outreach’.

Another source suggested that it allowed the couple to do ‘whatever they liked’, saying: ‘Their operating style is very different to the Cambridges and so having their own space to think as big as they like, working on a global scale, is perfect for them.’

Sources previously said part of the move was to do with the four royals becoming two established couples with families, and also inspired by the division into two separate working households. 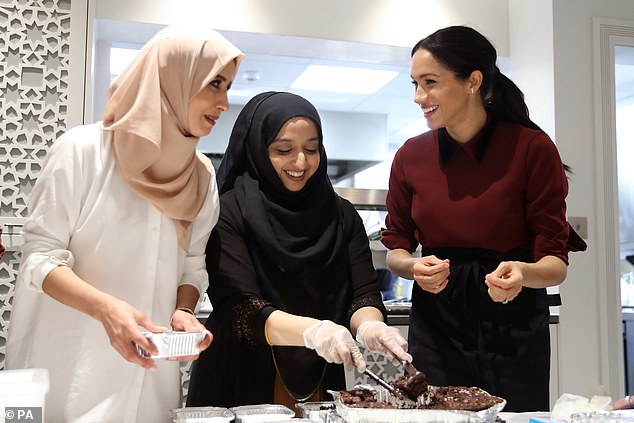 The change is aimed at setting the couples on ‘a path that is sustainable for the future’, they said. William is a future monarch and Kate a future Queen consort, while Harry is only sixth in line to throne.

But the two households have split since then, with Harry and Meghan leaving Kensington Palace for Frogmore Cottage in Windsor and appointing their own staff.

The Foundation said the move followed a structural review, and both couples will continue to work together including on the Heads Together mental health strategy. 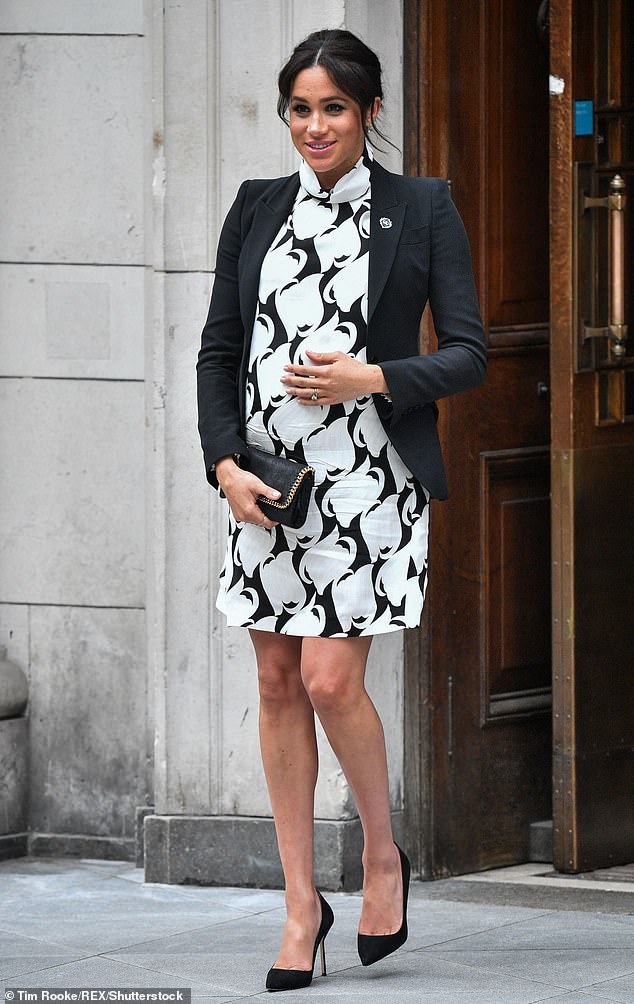 Meghan has been vocal about her support for women’s rights, and spoke on a panel for International Women’s Day in March

The Foundation, which had an income of £7.83million last year, on top of £9million in 2017, added that the decision was made to ‘better align’ their charitable activities.

Harry and Meghan have already split from the Cambridges’ Kensington Palace household, setting up their own at Buckingham Palace in the spring, with a separate head of communications and SussexRoyal Instagram account.

Royal aides previously said that the foursome were to remain joint patrons of the Royal Foundation.

What is the William, Kate, Harry and Meghan split all about?

What is the William, Kate, Harry and Meghan split all about?

– What is the latest announcement?

Harry and Meghan are leaving their joint charitable foundation with William and Kate to set up one of their own.

– What will it be called?

There is no name yet and there are no details as to what Harry and Meghan will focus on.

But it is likely to include a ‘global outreach’, the pair are passionate about working in Africa and promoting female empowerment.

– What about William and Kate?

They are staying with the original foundation which will be renamed the Royal Foundation of the Duke and Duchess of Cambridge.

– When was the Royal Foundation set up?

William and Harry established the body in 2009 to run all their charitable campaigns, Kate joined after her wedding in 2011, and Meghan officially became part of the team after marrying into the Windsors in 2018.

Campaigns have included Heads Together, the Endeavour Fund and projects with the Invictus Games.

– How did Meghan get involved?

When Harry and Meghan’s engagement was revealed in 2017, Kensington Palace announced the former actress was giving up her own charitable interests to begin work with the Foundation.

‘The only the role that she will begin with is as patron of the Royal Foundation. That has been a decision that she has taken,’ Harry’s then-communications chief Jason Knauf said.

– What was the four royals’ first event together?

They were dubbed the Fab Four after taking to the stage together at the first, and so far only, Royal Foundation forum in London in February 2018, three months before Harry and Meghan’s wedding.

It was billed as an annual event.

Harry said it was good to have ‘four different personalities’, but they had the ‘same passion to want to make a difference’.

He said ‘working as family does have its challenges’ but insisted ‘we’re stuck together for the rest of our lives’.

– What has changed since Harry and Meghan married?

There have been reports over the past year of a rift, first between Kate and Meghan, and then between William and his younger brother, Harry.

There were allegations of a dispute between the duchesses, who are said to be ‘very different people’, over reprimanding staff, and tensions during Princess Charlotte’s bridesmaid dress fitting.

This was followed by reports of a strained relationship and falling out between the dukes.

Sources deny there was a feud, saying Thursday’s announcement was ‘largely about preparing both couples for their future roles, which are obviously on divergent tracks’.

They added that the ‘Sussexes have a little more freedom and flexibility’.

William is a future king and Kate a future Queen consort, while Harry is sixth in line.

– Haven’t Harry and Meghan already split from William and Kate ?

In March, it was announced Harry and Meghan would be separating from William and Kate’s Kensington Palace office and they have since set up their own household at Buckingham Palace.

But royal aides said at the time that the foursome would remain joint patrons of the Royal Foundation.

– What are the other recent changes?

Harry and Meghan set up their own SussexRoyal Instagram account, and moved to bring up baby son Archie Mountbatten-Windsor in Windsor, having previously lived at Kensington Palace, home to William and Kate and their children.

– Why is the Royal Foundation announcement a big deal?

William, Kate, Harry and Meghan’s joint venture was intended to harness the star power of the four high-profile royals, but it has only lasted 16 months since their first appearance as a foursome.

The move is seen as the final step in the division of the couples’ public duties.

– Will they still work together?

The Royal Foundation said both couples will continue to work together on projects in the future, particularly Heads Together.

– What about the two Foundations being seen as rivals?

Sources said William and Kate’s Royal Foundation would help establish the Sussexes’ new Foundation, and they ‘anticipate the two organisations will have an incredibly close relationship going forward’.

But in 2018, William actually called on charities to combine forces, rather than establishing more individual organisations.

– What did the duke say?

In a keynote speech to the Charity Commission, William said: ‘Instead of setting up more individual charities working in the same fields, I wonder if we could do more to explore ways of combining forces, working and innovating together?’

The duke added: ‘Competition for funds between an ever-growing number of charities, and the confusion it can cause among donors, can lead to the silo-ing of expertise and, at worst, territorial behaviour.’