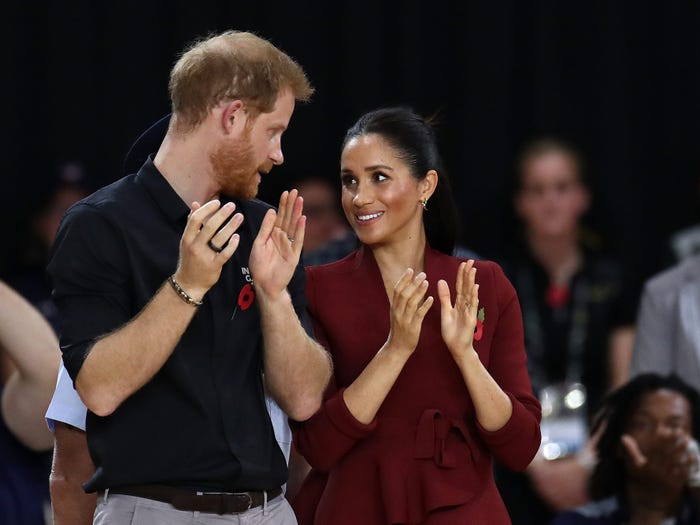 The Duchess of Sussex's lawyers have admitted in court documents that she gave a friend permission to speak to the authors of her biography, after previously denying that she was involved.

However, a source close to Meghan Markle told Insider that she and Prince Harry didn't want to be involved with the biography, "so it's still accurate to say she didn't cooperate with them."

In September, a judge ruled that the Mail on Sunday would be allowed to question Markle over her participation in the biography, "Finding Freedom," a book about her life with Harry, by royal authors Omid Scobie and Carolyn Durand.

The duchess is currently suing the Mail on Sunday over the misuse of private information, infringement of copyright, and breach of the Data Protection Act 2018 after it published excerpts from a private letter she sent to her father shortly after her wedding.

The publication won its bid to amend its defense to argue that she had "co-operated with the authors of the recently published book 'Finding Freedom' to put out their version of certain events" which could undermine her privacy claim.

While Markle previously denied having anything to do with the biography, which was published by Harper Collins in August, her lawyers have now said that she asked a friend to provide the authors with information about her relationship with her father, to change the narrative that she "abandoned him."

"Neither the Claimant nor her husband cooperated with the authors to put out 'their version of events' by means of the Book, nor did they meet with the authors, nor were they interviewed for the purpose of the Book, whether formally or informally," court documents published on Twitter by journalist Jack Royston read.

"The Claimant was concerned that her father's narrative in the media that she had abandoned him and had not even tried to contact him (which was false) would be repeated, when in fact she had tried to call him, and text him, and had even written a letter to try and persuade him to stop dealing with the media; and he had written back to her," the document says.

It continues: "Accordingly, she indicated to a person whom she knew had already been approached by the authors that the true position as above (which that person and several others who knew the Claimant already knew) could be communicated to the authors to prevent any further misrepresentation."

Markle's lawyer Justin Rushbrooke, previously said in a statement: "The claimant and her husband did not collaborate with the authors on the book, nor were they interviewed for it, nor did they provide photographs to the authors for the book," the Evening Standard's Tristian Kirk reported in September.

The judge previously said one of the authors, Scobie, had denied in a statement to the court that were was any contribution from Markle in the book.

The recently revealed court documents go on to say that the duchess sought advice from two senior members of the royal family and a palace advisor before writing the letter to her father, excerpts of which were later published by the Mail Online.

A source close to the duchess told Insider that Markle "did not provide a copy of the letter or share its contents directly or indirectly" with the authors.

"Nor did she or the duke want to be involved with the book, so it's still accurate to say she didn't cooperate with them," the source said.

The source added that while the duchess did have conversations with two senior royals and a trusted advisor about writing to her father, "once she decided to write the letter, she was the sole author."

Representatives for the Duchess of Susex, the Mail on Sunday, and Harper Collins did not immediately respond to Insider's request for comment.