Home » Lifestyle » Mike Herrera Explains How ‘Say Yes’ Is A ‘Different’ Kind Of MxPx Song: It Brings A New ‘Kind Of Energy’

Are you ready to ‘say yes’ to new music from MxPx? The punk band’s frontman Mike Herrera shares why he’s ‘excited’ to share the upbeat song, the work behind their livestream shows, and more.

Even though Mike Herrera has been happily married for twenty years, the MxPx frontman is feeling some teenage jitters when he talks with HollywoodLife, as if he’s back in high school and about to tap someone on the shoulder to see if they’re free to hang out on Friday night. “I feel because of the… I don’t know what it is because it’s a little different of an MxPx song,” he says, referring to “Say Yes,” the band’s newest track. “I feel a little nervous. It’s the same nervous energy you would feel when you’re about to ask somebody out, right? So that’s just the song, yeah.”

At first listen, “Say Yes,” featuring Kalie Wolfe of RIVALS, is a powerful burst of punk rock, a song detailing the emotions that come with asking someone out. It surges like the crackling electricity that dances under the skin right before you pose the question. Kalie and Mike’s vocals dance around each other, much like how two potential paramours flirt and feel each other out before taking the plunge. Though such romantic rituals are associated with adolescence, anyone of any age experiences what “Say Yes” is about – putting yourself out there, even with the chance of being rejected.

Additionally, that’s also what “Say Yes” is about – taking a risk. For MxPx, “Say Yes” has the band – Mike, Yuri Ruley, Tom Wisniewski, and Chris Adkins — putting themselves out there for their fans with this new sound. “We’ve collabed before, but the sound is different,” says Mike. “It sounds different. It’s got horns in it – although, hey, there’s been songs we’ve had in the past with horns. It’s got, my friend Billy on organ and same, we’ve had organ even as far back as Slowly Going the Way of the Buffalo, which is our fourth album.”

“It’s very upbeat, it’s very catchy,” says Mike. “This song was an idea I had, and it didn’t feel complete, just having the stripped-down band, because a lot of the MxPx style is, three- or four-piece, and that’s it.” Listeners wouldn’t know how much work went into those two-and-a-half minutes of fun, how much work went into making it the perfect summer jam, and “how many times we went back and forth on certain lyrics and this and that,” he says.

“I even like re-sang some parts,” adds Mike. “Kalie did a great job, by the way, she sounds amazing on the track, and she really steps it up. You don’t hear that kind of energy a lot of times from MxPx because it’s my voice,” he says as the band’s lead vocalist. “It’s my voice most of the time, and all of a sudden, you hear this young female voice just killing it. It makes you perk up, you know? I think in all those cool ways, I’m just really interested to see how people react to it. I’m excited.”

So, why so nervous? “I think,” he continues, “it’s because it’s following such a skate punk-type anthem of a song.” He’s referring to “Can’t Keep Waiting,” a song that fans heard first on MxPx’s monthly Between This World And The Next livestream concerts. “We released that in the spring,” he says, “and people love it. Now that this [‘Say Yes’] is looming, I just hope people… It’s always like that, right? It’s always like ‘I hope people like this,’ you know? You put yourself out there, and you change something, and you go a little different. I think there’s that nervous energy that comes up.” 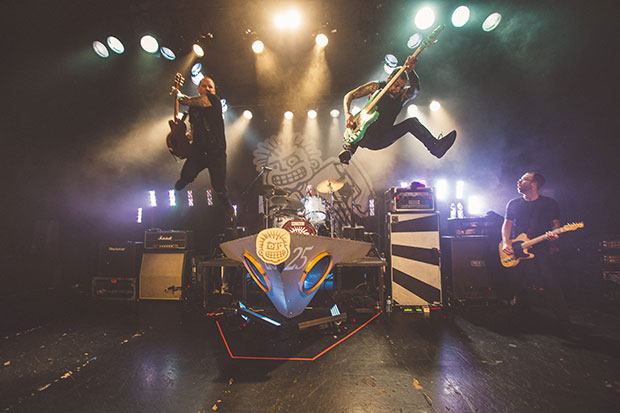 “It was like that when we released our last record, although I was very proud of it and wasn’t too worried that people weren’t going to like it,” he says of 2018’s MxPx. The album won over some of punk’s staunchest critics: specifically, the comments section of PunkNews.org (“MXPX have been quietly releasing their best material since Life in General these past 2-3 years,” “I really enjoyed the s/t album,” etc.)

The album was funded by fans through Kickstarter, and the group had exceeded its goal. Not only did this prove that there was an audience for MxPx’s music, but it also showed the close bond between the group and its followers – a bond they fostered during the pandemic lockdown with their monthly live shows on the internet.

Though music venues are opening up and bands are going on tour, the livestream concert is probably not going away – and bands could look to Between This World And The Next on how to do it right. Each live stream feels intimate, as you’re invited in to watch the band perform. The moving camera gives the feel of a basement show, as if you’re literally a foot away from Mike as he sings, from Yuri furiously beating the drums, and from Tom and Chris as they complete the band’s signature rich sound.

“With our livestreams, it took us quite a while,” says Mike. “It took months and months of planning. I was talking with my business manager, my business partner, the whole team, the MxPx team.” Mike says that a conversation with his business partner yielded the idea – that if they do it right, they could make the shows a series, and when shows return in the future, “We can still have this in our back pocket. We can do this for those fans out there in the world that aren’t going to be able to see us live, no matter what happens.”

“Livestreaming on the internet has been an insane tool for us to shrink that world and to let people be able to get a little glimpse into what we’re doing,” adds Mike. “See, the difference is, we didn’t try to do a live show. We didn’t try to do ‘Hey, come see us.’ Yes, it’s live on the internet. We’re playing songs live, but we didn’t try to make it just like our live punk shows in venues. The reason was that people are going to [watch this] in a different setting than they normally see a show live. We wanted to make that experience match a little bit better.” 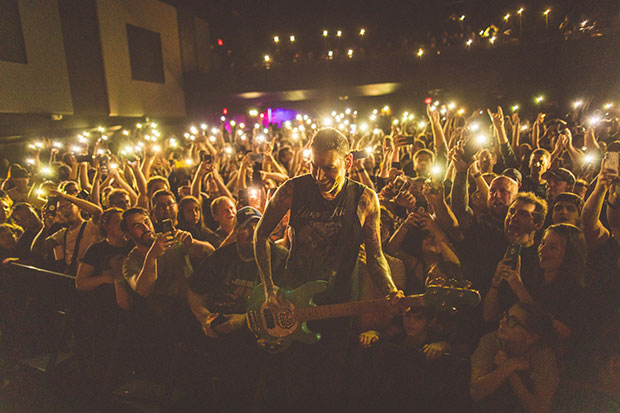 “Hence, if you’re going to be mainly watching from your living room, your bedroom, maybe you’re sneaking at work, whatever it is, you’re sitting down, or you’re hanging out in a more relaxed area, and so we wanted to bring our space, our living room,” he adds. Now that venues are opening up, will the band continue the series? “I think for sure, we’re going to do more livestreams in the future, even when we go back to doing shows, but it may change, you know, it may keep morphing.”

The band is also taking a similar stance for a possible follow-up to their self-titled 2018 album. “This year, I’ll be working on it — we’re going to work on it. We’ve been talking about what’s next, and a new album is on the horizon,” he says, before quickly adding – and stressing, mind you – that he “hate(s) saying that because I hate putting it out in the public, but I guess it’s out there.”

There’s a process to making an MxPx album and one that can’t be rushed. “As far as songwriting, I probably already have enough songs for an album, but II know I don’t have the right songs for an album.” The songs have to fit together, he says, and the pieces haven’t lined up yet. “At this point in our career, after you’ve released 10 albums, every album, if you want it to matter, it has to be better than the last one.”

“My goal is,” he says, “every album has to be better than the last thing that we released. It doesn’t have to be the same or different or whatever. It just has to be better in my mind, in my heart. To me, you don’t always have that feeling right away. It permeates after a few listens, and then you let the outside glow wear off a little bit, and you go. ‘This is what people are actually hearing, not what I think people are hearing.’ Then I make my decisions off that. I try to anyway. You just keep working hard, and you never know what’s going to happen.”