An investigation by Major League Baseball into alleged sign-stealing by the Houston Astros has resulted in a harsh set of penalties, the organization announced Monday.

Astros general manager Jeff Luhnow and manager AJ Hinch have each been suspended without pay for the 2020 season, the team will have to forfeit its first- and second-round draft picks in the 2020 and 2021 seasons, and the Astros have been fined $5 million.

Per The Athletic, $5 million is the maximum allowable fine under current MLB rules.

Former Astros assistant general manager Brandon Taubman has also been suspended for one year, so he will not be allowed to be hired by any team in the league. The Astros fired Taubman earlier this year after he allegedly taunted a group of female reporters over the team’s hiring of Roberto Osuna, who had been suspended for allegedly assaulting the mother of his child. 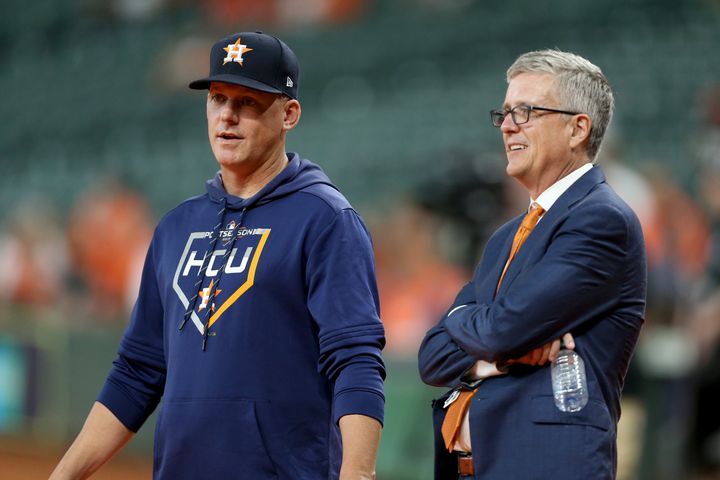 Astros owner and chairman Jim Crane fired Luhnow and Hinch Monday as a result of the inquiry. “We will always do the right thing and will not have this happen again on my watch,” Crane said at a press conference.

He resisted suggestions the cheating casts a shadow on the team’s 2017 World Series win.

Notably, the investigation found the Astros engaged in sign-stealing “throughout the postseason” leading up to their 2017 World Series victory.

The investigation began after former Astros pitcher Mike Fiers told The Athletic last year about a special video feed the team had used to monitor hand signals made by opposing catchers. Once the signals were deciphered, Astros staff would bang on garbage cans to signal which pitches were coming.

“I find that the conduct of the Astros, and its senior baseball operations executives, merits significant discipline,” MLB commissioner Rob Manfred said in the ruling issued Monday. “The conduct described herein has caused fans, players, executives at other MLB clubs, and members of the media to raise questions about the integrity of games in which the Astros participated. And while it is impossible to determine whether the conduct actually impacted the results on the field, the perception of some that it did causes significant harm to the game.”