Morrison walks away from integrity commission promise without Labor support

Prime Minister Scott Morrison has walked away from delivering a federal integrity commission unless Labor supports the government’s model, as Opposition leader Anthony Albanese accused him of breaking his promise on the issue.

Morrison sought to pin the blame on the Opposition for the failed commitment, saying his government would only revive the issue in the next parliament if Labor backed its current proposal without amendments. The Coalition’s model has been widely criticised by legal and transparency experts for lacking teeth and being overly secretive. 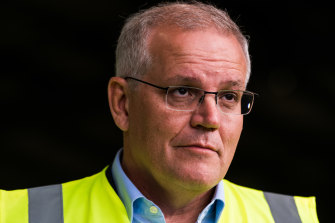 Prime Minister Scott Morrison has indicated the Coalition won’t revive plans for a federal integrity commission in the next parliament unless Labor supports the current model.Credit:James Brickwood

“I put forward a detailed plan, a detailed proposal which the Labor Party rejects. I have honoured my proposal. The Labor Party don’t support it. That is where the issue rests,” Morrison said on Thursday, as he campaigned in Tasmania.

Pressed on whether he would be open to amending the government’s model to address the criticisms, Morrison said he was not interested in a model resembling the NSW Independent Corruption Commission which he called a “kangaroo court”.

“What I am concerned about is the circus that Labor would want to put in place with an integrity commission. I have lived with that in NSW. I have seen the lives destroyed by a commission such as that which becomes a kangaroo court and goes around and seems to operate through politics and shaming people and the proper process that should go to those important issues being properly considered,” he said.

Campaigning in the marginal NSW seat of Hunter, near Newcastle, Albanese rejected the attempt to blame Labor as “bizarre”, and claimed the Coalition had ditched the issue because it didn’t want a commission to scrutinise its policies or ministers.

“[Morrison] said very clearly when he became prime minister, there would be a national integrity commission. And yet what he’s done is not even introduced the legislation of the parliament,” Albanese said.

“The reason why this prime minister doesn’t want an anti-corruption commission is sitting on his front bench…“A national integrity commission would look at the money that was paid for land at Badgerys Creek – $30 million for land that was worth $3 million. It would look at the sports rorts saga. This is a prime minister who can’t be trusted to deliver on his commitments next term because he’s shown this term that he can’t be trusted.”

Morrison first promised to deliver an integrity commission in 2018, but its proposed model was rejected by Labor and the crossbench, and dismissed by the Centre For Public Integrity as an “appallingly weak sham designed to hide corruption”.

Flanking Morrison at a press conference in her electorate on Thursday, Archer backed the prime minister.

“I have spoken on this several times and made the view that all sides of politics agree that we should have some sort of national integrity body. The disagreement comes on what that should look like. The prime minister is quite right,” she said.

Pressed on her lack of support for the government’s model, she said, “I don’t want the Labor model”.