MORRISONS shoppers have been left gobsmacked after finding "wretched" packs of eggs in liquid on the supermarket's shelves.

The huge packs were spotted in the meal deal section in a Morrisons store, sending social media users into a frenzy. 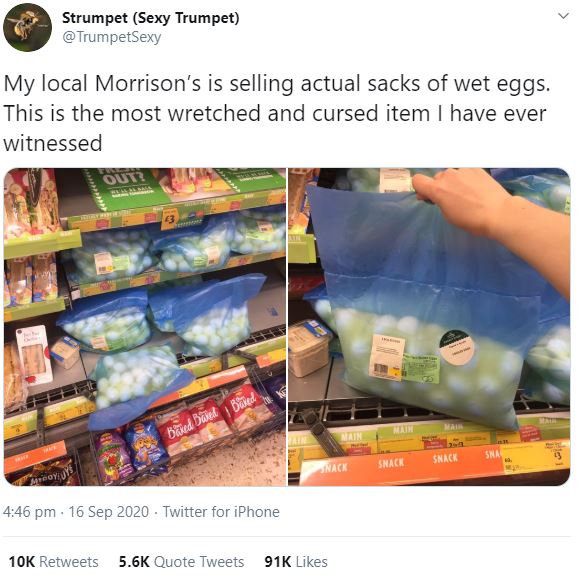 A Twitter user, who first posted pictures of the bags, said: "My local Morrisons is selling actual sacks of wet eggs.

"This is the most wretched and cursed item I have ever witnessed."

He added: "Also it’s in the meal deal section, which implies this is considered lunch?

"Does this count as a main, or a snack? I have so many questions, and no answers."

The bags are marked as five-packs for £1, although judging by the pictures, each bag comes with a lot more eggs than that. 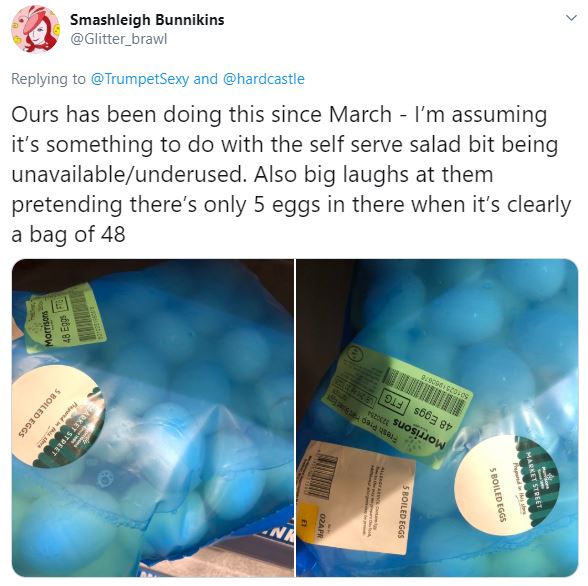 Morrisons told The Sun the eggs are usually prepared for its salad bar, but sometimes it offers them to customers directly.

This was also noted by one of its former workers on Twitter, who said: "I worked in morrisons so can confirm that these eggs in a preservative for the salad bar lol.

"We didn’t boil the eggs or de-shell them they came like this. Not sure why they’re being sold on shelves maybe they’re about to expire?

"But now sure why everyone's freaking out over it."

While another added: Ours has been doing this since March – I’m assuming it’s something to do with the self serve salad bit being unavailable/underused.

"Also big laughs at them pretending there’s only five eggs in there when it’s clearly a bag of 48." 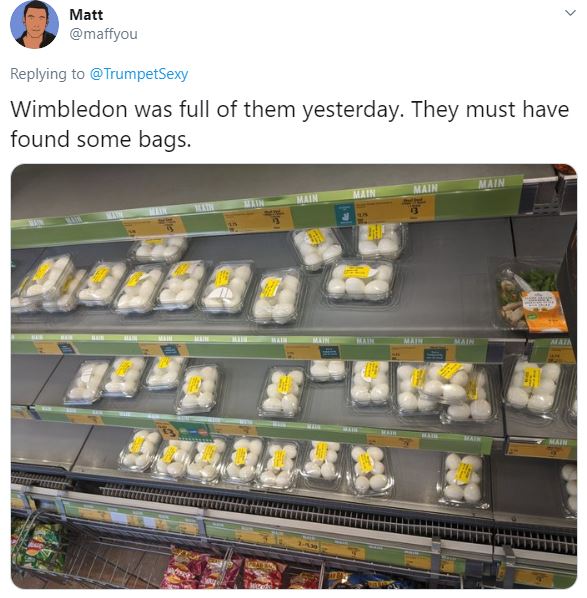 Another Morrisons shopper found hard-boiled eggs in packs of six in a west London store and said: "Wimbledon was full of them yesterday.

"They must have found some bags."

Other shoppers were more positive about the eggs, with one tweeting: Is this real life or am I in heaven?"

And another added: "There are a lot of disabled people who seriously cannot cook & peel hard boiled eggs.

"It’s a great convenience for them, though I doubt anyone needs that many eggs."

If you're an egg fan, it could be worth keeping your eyes peeled when you next visit a Morrisons store.

In comparison, packs of six non-cooked eggs costs from 90p at the supermarket.

A spokesperson for Morrisons told The Sun: "These boiled eggs are prepared for our salad bar.

"Sometimes, rather than wasting them, we offer them to customers directly."

In January, Aldi rolled out an egg cooker for a bargain price – and it makes poaching easy.

A simple test can reveal whether your eggs are fresh enough to eat – we explain how to check.

A woman recently also shared a hack for the perfect poached egg by using cling film to keep it in shape.