Viewers of George Clarke’s Old House, New Home were left stunned last night after a tiny 60 square metre terraced house was transformed for £75,000 with the help of an enormous extension.

Hannah, from South London, had squeezed her bed into the lounge of her tiny two bed, allowing her children to have the master bedroom.

But architect George Clarke expanded the house by removing chimney wells and building an extension, to give the mother-of-two her huge ‘dream’ kitchen.

Viewers were amazed by the transformation on a terraced home in south London, which aired on George Clarke’s Old House New Home last night – and couldn’t help but notice chemistry between the single mother and the architect.

The TV architect divorced from his wife in 2014, and it is not known if he currently has a girlfriend. 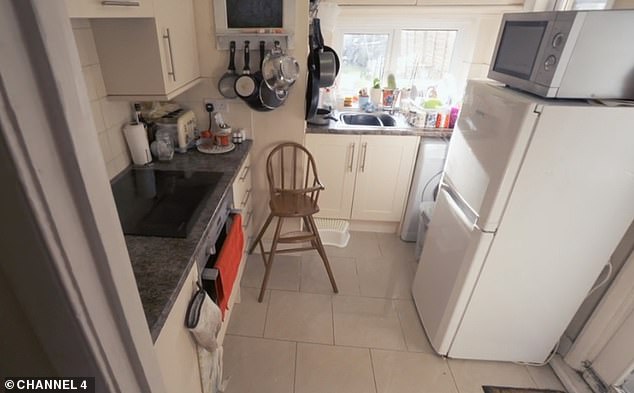 Viewers of George Clarke’s Old House, New Home were left staggered by the extension at the back of the property, which gave the young mother a huge kitchen diner 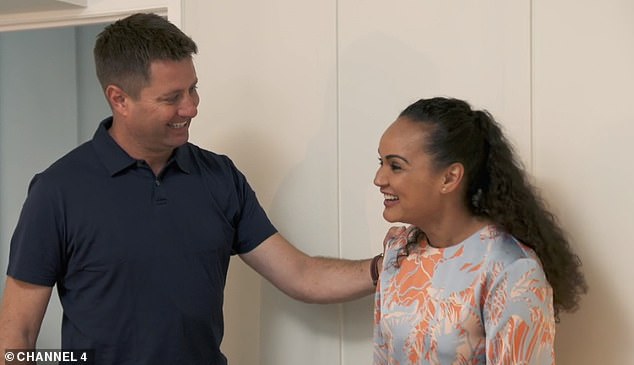 One wrote:’Anyone else thinking what a lovely couple George Clarke and Hannah would make on Old House New Home? By the way the house was lovely house.’

Hannah, a nurse working for the NHS, had brought her home nine years ago with her ex-boyfriend as a perfect ‘first home’.

But now, the mother of two feels cramped in the tiny house, which has a floorspace of just 60 square metres in total – just a touch bigger than a double decker bus.

With her young children Ella and Austin begging for bunk beds, the selfless mother had given them the master bedroom. 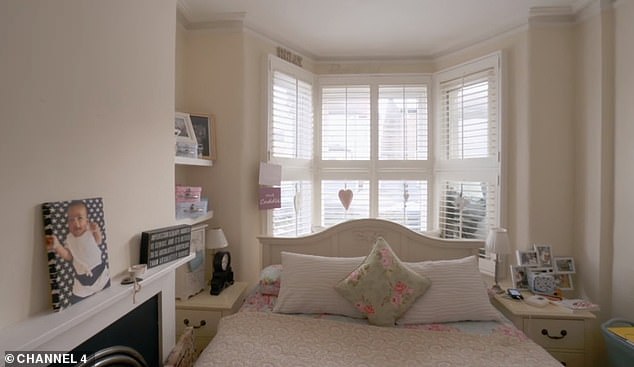 The mother of two squeezed a double bed into the would-be-lounge at the front of her house, giving her children the master bedroom 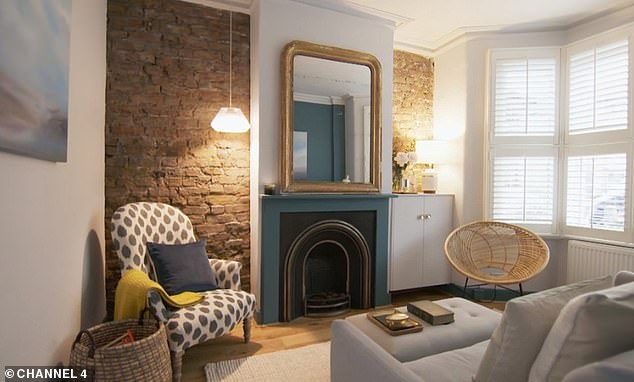 She squeezed her own bed into the front lounge area, and stuffed her living space into one tiny combined lounge, dining and kitchen area.

There was even an outdoor toilet at the period property, with an entrance via the garden.

Hannah revealed how difficult it was to squeeze her family life into the tiny home, saying: ‘People do think I’m a hoarder but I actually do need all this stuff.’

Unable to afford to move up the property ladder, she dreamed of ‘country cottage in the city’ with a huge kitchen, and an island where she could cook family dinners. 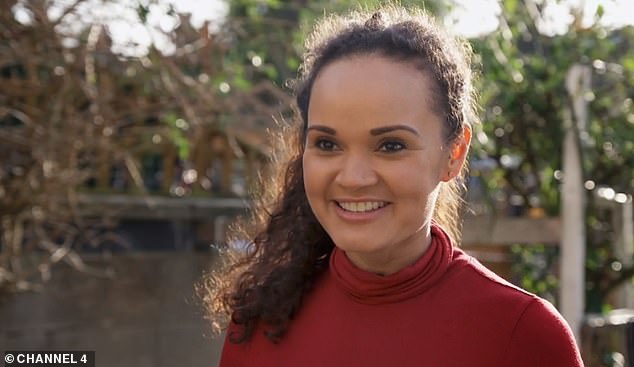 Mother of two Hannah said she was desperate for a more space efficient home, but couldn’t afford to move up the property ladder 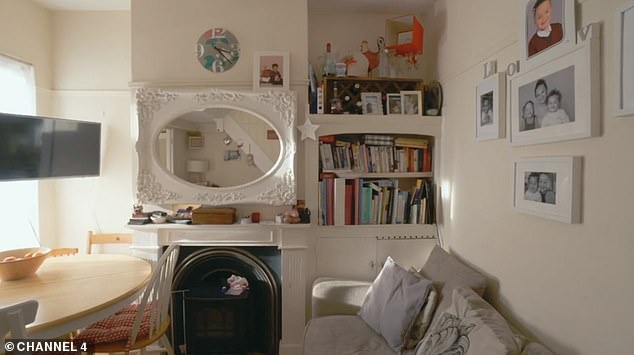 Despite Hannah’s best efforts to make the tiny house feel homely, the main living area was cramped and small

With a £75K budget, George suggested an extension on the back of the house, losing the minuscule kitchen and outside bathroom and extending the house by six metres.

The team demolished and removed chimney stacks and fireplaces, providing extra space to some of the tiny bedrooms upstairs.

And George added wooden panel detailing through Hannah’s home, running it from room to room to give the the illusion of a bigger space, as well as a contemporary steer on a traditional look.

Five months on, Hannah’s tiny terraced home was transformed into a trendy house, with period features. 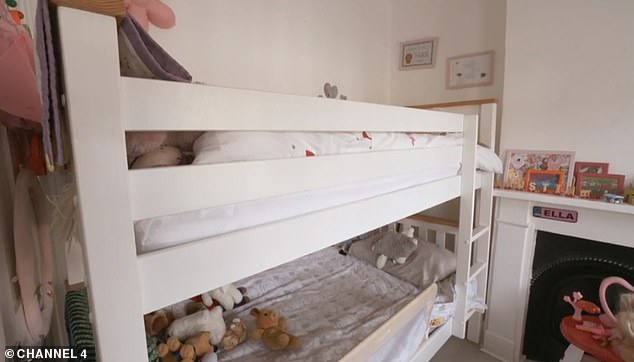 Hannah’s children Ella and Austin were keen to have bunk beds, so the selfless mother moved them into the master bedroom 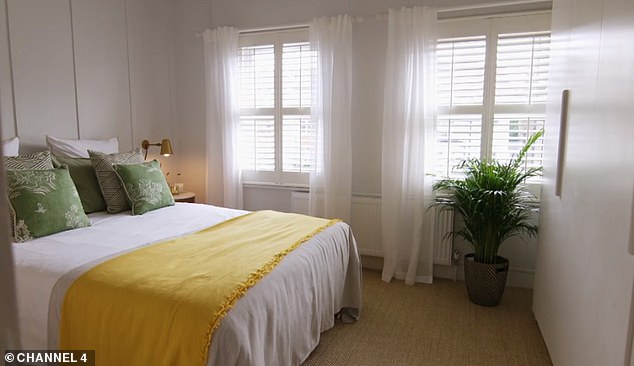 George Clarke removed some of the property’s original features in Hannah’s master bedroom, including chimney wells and fireplaces to create more space

As she arrived at the home, George appeared amazed by the stunning mother-of-two, saying:’Look at you looking all glam. You look amazing!’

The father-of-three is divorced, but is believed to have met a new partner following his split from wife Catriona.

Removing the bunkbeds from the former master bedroom, Hannah finally moved back into the main bedroom, which had been transformed with the help of trendy paneling to look chic and stylish.

She couldn’t help but gush over the master bedroom, which she said was exactly like a five star hotel.

The middle ‘box room’ had become a ‘dumping ground’ for Hannah’s hoarded stuff, but George moved the children into the room, with a trendy L-shaped bunk bed to maximise the space. 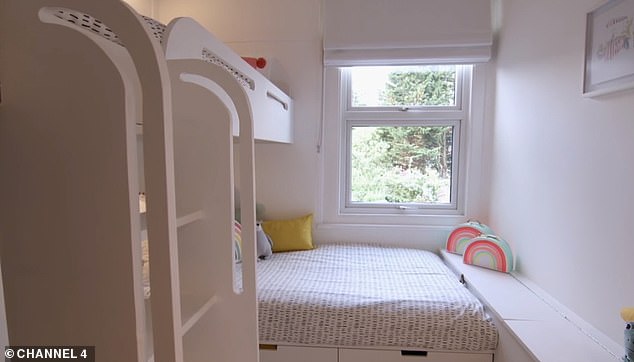 The children moved into the ‘dumping ground’ middle room, and managed to keep their bunks with the help of some clever L shaped beds

And viewers were most impressed by the enormous kitchen-diner extension at the back of the property, finally giving the mother of two space for her dream island.

George introduced wooden panelling into the home, giving it a ‘country house’ cohesive feel, running from room to room.

Viewers were impressed by the transformation, taking to Twitter to praise the TV architect. 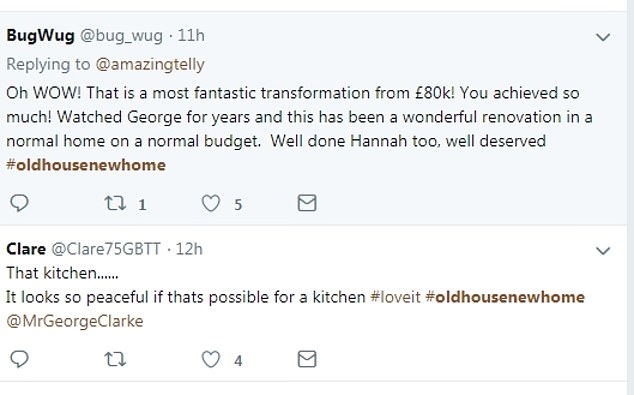 Many were left amazed by the transformation of the house, with many praising the ‘normal’ budget

Another wrote: ‘@MrGeorgeClarke Fantastic to see a ‘normal’ home tonight for the nurse with a reasonable 75k budget. Really excited to see what will be achieved as similar to mine #oldhousenewhome.’

While another added: ‘Loved the kitchen in Hannah’s new house…an amazing transformation…love the simple paneling idea.’

One commented:’Oh WOW! That is the most fantastic transformation from £80K! You achieved so much! Watched George for years and this has been a wonderful renovation in a normal home on a normal budget. Well done Hannah too, well deserved.’

Meanwhile others couldn’t help but notice chemistry between the mother of two and the television architect.

One wrote: ‘The woman on Old House New Home is flirting with George Clarke & I’m like ‘get yo hands off my man!’ (Nice kitchen though, love). To be fair, I’d be doing the same if he did my house.’

Another commented: ‘Was watching #oldhousenewhome and I swear there was some romantic tension between her and the architect.’