The entire Melbourne leg of The Kid Laroi’s first world tour has been postponed with the Australian rap superstar cancelling his second show at Rod Laver Arena due to illness. 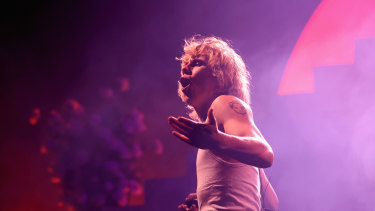 The Kid Laroi has been struck down by illness.Credit:Cameron Spencer

His much-anticipated End Of The World Tour came to an abrupt halt on Friday, with Laroi cancelling his show 40 minutes after it was due to start, leaving thousands of disappointed and angry fans standing in front of an empty stage.

In an Instagram post on Friday night, Laroi said he was “struggling to stand and go to the bathroom” after falling ill.

“I wanted to perform very badly, so we called the doctors and had them bring an IV drip and some extra stuff to try and help,” he wrote on Instagram.

“As the night went on, it got worse … I was getting super light-headed and my body felt super heavy. I promise you with all my heart that I gave everything in me to try and get up on that stage tonight. 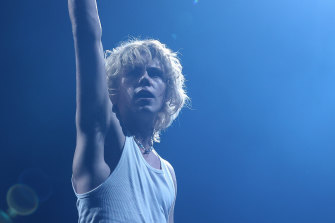 The Kid Laroi on stage on Sydney last week.Credit:Getty

“This is my first ever tour and I absolutely hate that I’ve had to do this, especially at the last minute as it’s not fair on you guys, but at the end of the day I have to put my health first and I would be lying to you if I told you I was OK to come up and perform for you.”

In a second statement on Saturday, 18-year-old Laroi said he had woken up feeling worse.

“I have just seen the doctor again and I have been told I can’t perform tonight,” he wrote.

“My heart is broken, and I feel like I am letting you all down again, but I promise I will make it up to you.

“I need to rest and get myself healthy so that I can give you the show you deserve when I come back to Melbourne next week.”

The musician also had to cancel an appearance at streetwear store Culture Kings on Saturday afternoon. “PSA, unfortunately, today’s in-store appearance with @thekidlaroi has been postponed. We hope he has a speedy recovery,” the store posted on Instagram.

The Kid Laroi made a surprise appearance at Melbourne CBD nightclub Lucky Thursdays on Thursday night before he started feeling unwell.

The Kamilaroi rapper, who was born Charlton Howard, moved from Sydney to the US four years ago and has since built a hugely successful career.

He kicked off his first major global tour in Sydney last week and has performed in Perth and Adelaide. He will be touring until September with a massive 54 arena shows taking place across Australia, Europe and America.