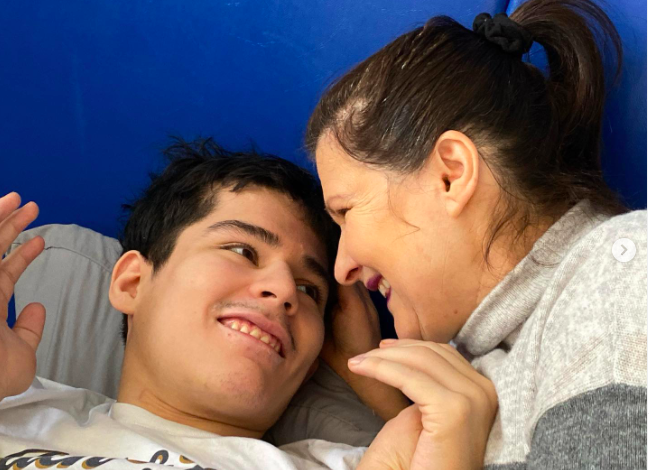 Walking with my son Stephen, we were suddenly overwhelmed by a surge of people.

Usually Stephen enjoyed an evening stroll, but on this particular evening, the streets were flooded with supporters from our local football ground.

As the crowds swelled around us, I could sense his anxiety rising. Stephen, then 15 years old, suddenly lashed out. I cowered as he began kicking and hitting out at me in the middle of the street.

A man from the nearby train station rushed over and held  Stephen by the waist until he calmed down.

I stood up, my nose and lips bleeding, as Stephen’s frustration slowly melted away to reveal confusion and sadness.

Although I’d been injured, I was still more concerned for my son’s safety. He was growing bigger and taller, and I was afraid that next time people around us wouldn’t be quite so understanding.

What people don’t realise is that Stephen, age 27, doesn’t mean to hurt anyone. He’s a joyful young man with an infectious smile and gorgeous dimples. But he is also severely autistic. Stephen has a learning disability and his speech is limited. Sometimes, when he feels anxious or frustrated, he will lash out and display ‘challenging behaviour.’

Stephen doesn’t realise what he’s doing but these pressures can build until he reaches breaking point. He’ll self-harm and bang his head against the wall, or kick and headbutt me. But the moment he calms down, he’s back to being the same loving and caring Stephen. He smiles and asks me for kisses.

I was afraid social services would take Stephen away

Stephen was three years old when he first started self-harming by banging his head against the floor. As he grew bigger, he would break things and rip his clothes when he felt overwhelmed.

Due to a lack of support, we began to feel helpless and exhausted. I was a working mum, and school holidays were the hardest. Stephen was so frustrated that his routine had been disrupted, and he communicated this through his behaviour.

His behaviours became increasingly challenging and colleagues at work would see the bruises on my arms and panic. ‘You need to tell the police what your husband is doing to you,’ they would say, thinking I was a victim of domestic abuse. But this wasn’t abuse; it was human nature and a cry for help from my severely autistic son.

I couldn’t explain what was happening to them because I was afraid social services would take Stephen away. Sometimes, our neighbours would call the police if they heard banging and shouting, despite me leaving notes on their doorstep to explain Stephen’s diagnosis. Luckily, our local police force were so understanding.

By the age of 16, Stephen was having challenging episodes every day. At his specialist school, he was separated from his classmates and locked in a sensory room all day. Because he wasn’t getting the right support, Stephen became very aggressive at home, damaging and breaking things.

I asked my local authority for help, but I was told that I was a good parent and coping well. I even went to see a human rights and children’s education solicitor. There needed to be more funding so that Stephen could receive dedicated care in the community to manage his challenging behaviours and help our family settle into a routine.

That same year, we had another meeting with the local authority. It was decided that the best option was to send Stephen away from our home in north London to a residential school in Norfolk. I was worried about Stephen being so far away, but it felt like the only option.

During the first couple of months, things seemed to be going well. Stephen had three dedicated carers and he liked going for walks in the countryside. Being in a calm environment meant that his challenging behaviours were reduced. I talked to the staff there every day and visited with Stephen every weekend.

But things took a shocking turn.

Management of the school changed hands and Stephen’s care team was reduced. As his behaviour escalated again, he was isolated from the other students and stopped going outdoors. There weren’t enough staff to look after each child and Stephen was also rushed to hospital after suffering a large bleed on his head called a haematoma.

The situation was desperate and Stephen started self-harming again. I desperately tried to negotiate with the local authority to find more funding and better care, but it was too late.

Stephen had been living at the school for two years when, in February 2013, they told us they could no longer provide care for him. One night, I received a devastating phone call – a social worker had decided that Stephen, then aged 18, should be sectioned. He was being detained in a mental health hospital more than 70 miles from our home.

My world came crashing down. My son wasn’t mentally ill; he was being failed by the system. What Stephen needed was the right environment and support to help prevent and manage his behaviours – not be locked away from the people who loved him most.

Over the next six years, our lives were a living hell. I was given the impression that Stephen would receive therapeutic treatment, but he was trapped on a psychiatric ward with older patients, including violent criminals, who had a range of different psychological conditions.

I would travel the 80 miles from our home in north London to visit him every week, and Stephen was so over-medicated that he could barely stand up. The staff had no understanding of his needs, and he’d be covered in bruises triggered by his own anxiety. It was so cruel; Stephen was being treated like he was less than human.

Ten months after Stephen was sectioned, I began working with the learning disability charity Mencap and the Challenging Behaviour Foundation to campaign for Stephen’s release.

I learnt that because of issues with social care funding, Stephen was one of at least 2,000 people with a learning disability and/or autism being caged within inpatient units and separated from their loved ones, as opposed to being supported by the right services in their local community.

I organised protests around the country, even taking a petition for Stephen’s release to the steps of Downing Street.

In 2015, Stephen was moved to another specialised autism unit in a secure hospital in Colchester. He was closer to home, but the effects of long-term sedation and being stuck indoors for months at a time meant that he’d lost what little speech he already had.

I continued to try and get social services to see that there had to be another way – we could find the right funding for Stephen to live at home, and access the support he needed in the community. Fortunately, our local council listened to us, and an adapted house was provided for Stephen, with 24-hour care from a provider.

Finally, in December 2018, after almost seven years trapped inside two inpatient units, Stephen was discharged. Stephen moved into an adapted house in West London, but he was haunted by his experiences. He suffered from panic attacks and was so institutionalised that for over nine months he wanted to sleep on the floor.

My son was stripped of his human rights and tragically we are not alone.

Statistics show that the average length of stay for people with a learning disability and/or autism in inpatient units is five and a half years. In December last year alone, there were over 2,700 reported uses of physical restraint, over-medication and solitary confinement against people like Stephen in these horrifying modern-day asylums.

Recently, BBC’s Holby City featured a storyline where Madge, a nurse at the hospital, revealed she had been injured by her daughter, Lizzie, who is autistic and has a learning disability. Like Stephen, Lizzie’s behaviour was becoming more challenging because the family couldn’t access the right social care support and funding.

What Holby City failed to show was that Madge’s situation is something that happens to thousands of families across the country. Challenging behaviours are not a form of domestic abuse – they are created by a lack of care, compassion and support because someone in authority decides the funding needed isn’t available.

And yet without the right community support individuals like my son can reach crisis, and lengthy stay in inpatient units cost so much more and can be so traumatic.

People with a learning disability and autism need the right support, provided locally at the right time. They need early intervention and positive behaviour strategies to reduce the severity and frequency of their challenging behaviours.

There’s so little awareness about the struggles families are going through. Then, the worst happens, and we find our loved ones trapped in inpatient hospitals.

I visit Stephen every day in supported living. Things are a bit more settled, but I believe he is suffering from post-traumatic stress disorder, and he still struggles to express himself.

Today, I see it as my duty to teach the world about this national scandal and what good support looks like. People with a learning disability should never have to call an institution their home and when families say we are at breaking point, our pleas for help shouldn’t be ignored.

Stephen belongs with his family and life has never been the same since he was taken from me.

If you are worried that someone you know with a learning disability and/or autism is at risk, you can contact Mencap’s Freephone Learning Disability Helpline: 0808 8081111 or email [email protected]