The first time I realized I wasn’t straight, it was 2007, my first year at an all-girls Catholic high school. Beads of sweat formed on my neck and my hands trembled so violently, I had to sit on them. I was silently shrinking into a pew alongside my classmates in a small chapel at my school. I could hear my religion teacher at the time discussing the sanctity of marriage between a man and a woman. All I could focus on was Jesus’ tortured face on the crucifix staring down at me between guilty flashbacks from the night before. Little did I know then how much my sexuality would change over time. In fact, it would change multiple times before I finally determined the label I felt most comfortable with right now: lesbian.

Late into the night before that moment in the chapel, I littered my search history with the telltale signs of a burgeoning queer woman: "How do you know if you’re gay?" "Am I gay or bisexual?" "Am I a lesbian, or do I just think girls are pretty?" "Can you want to kiss girls and not be gay?" Each click on a new article brought me closer to one conclusion: I was not straight. Simultaneously, each click brought with it another layer of self-loathing, denial, and fear. What would my parents say? My teachers? My friends? No way was I not straight. Girls are just nice to look at; of course I would find them pretty. I just thought about kissing and having sex with girls because my own sexuality was developing in general. It would be fine. I would be fine.

Cue days, weeks, months, and years grappling with what was "real" sexual attraction and what I convinced myself was just admiration. I felt suffocated by the fear of losing everyone close to me just because I wasn’t experiencing the feelings everyone around me told me I should feel. Because of that fear, I had subconsciously written off anything I suspected as sexual attraction to women as nothing but an appreciation of beauty. I continued living out my high school years like everything was normal. I was your typical, definitely, totally, 100% straight teenager.

"OMG, Zac Efron is so hot," my friends would gush.

Except… I wasn’t. I know that now. But at the time, I convinced myself I did. At first, I told myself I was a late bloomer. In hindsight, as I approached the end of high school, every feeling my girl friends described feeling toward boys, I searched for, pushed for, and, sometimes, even yearned for — anything to support my longing to be a Normal Teen. 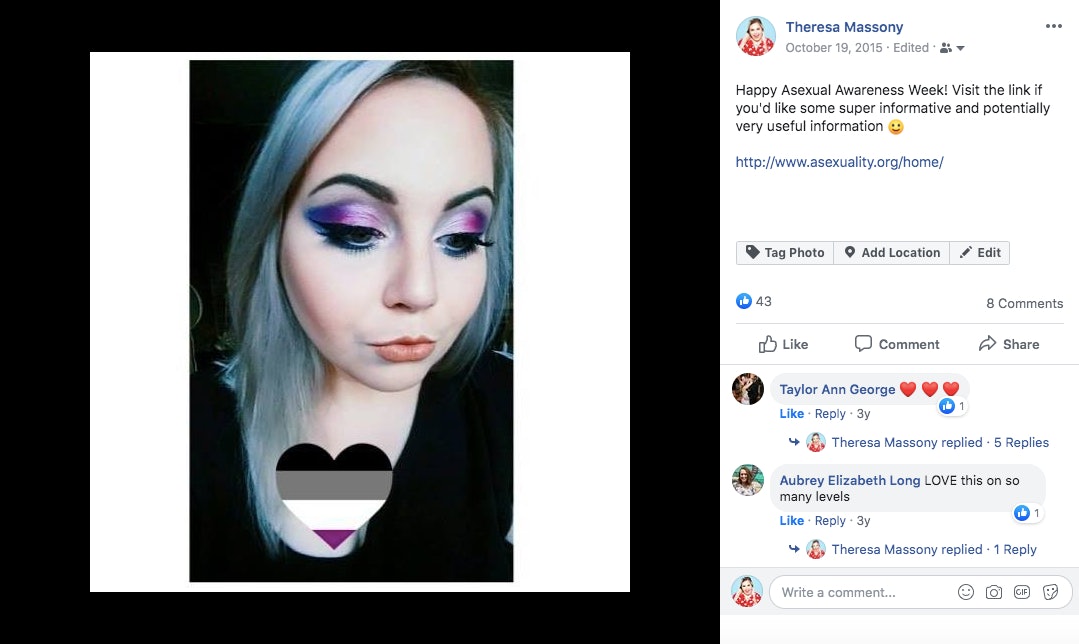 To my surprise, my coming out as asexual evoked refreshingly anticlimactic responses from my loved ones. My parents said, "OK, great," and carried on with the day. My friends asked a few questions in an attempt to understand me better and told me they loved me. All in all, it was business as usual. And from that point on through my college years, that felt great… until I realized I wasn’t finished learning about my sexuality.

Several months post-college, as I grew more confident in my identity, I ever-so-slowly felt more comfortable educating myself on LGBTQIA+ issues and further exploring my own sexuality. It also helped that, around this time, I moved away from my Southern hometown and college town to the much more liberal metropolis that is New York City. I no longer felt suffocated by traditionalist, heteronormative values and was, instead, flooded with interactions with people from myriad backgrounds and preferences.

This is definitely not a timelapse and we were 100% without a doubt going this fast. ?

With this influx of feelings and people came an influx of both excitement and anxiety. I could be anyone! There were so many possibilities and people to meet! On the other hand, the sexual attraction I felt toward women — the same thing I agonized over and fought so hard to suppress growing up — was slowly creeping back up, stronger than ever. I was scared because the feelings were so fervent, I didn’t think I could stop them. I was even more scared because I knew I didn’t want to.

After much introspection, I began feeling more comfortable with a new label: this time, as bisexual. Naturally, this realization was just as confusing as the first. I finally knew there was no denying I was sexually attracted to women. However, I still wondered if I was just a late (like, really, really late) bloomer to being interested in men. I mean, I had a crushes on boys my age growing up. Remember Zac Efron? He was cute. I thought, perhaps I was only romantically interested in men — I just hadn’t found the right one yet. As far as I was concerned, the label of bisexuality definitely fit more than asexuality to me, and I no longer had to suppress my feelings for women because my fear of rejection and intolerance had lessened over time. Ultimately, it felt right for me, and who was I to deny that?

In theory, coming out as bisexual should have been easier than my first coming out experience, right? After all, I was living in a liberal bubble and my family and friends had already accepted that I wasn’t straight. However, after landing on bisexual, all I could think about was how dumb I felt. How could I be this stupid? I thought. How TF am I supposed to say, "Just kidding, I’m actually not asexual, surprise"? These thoughts, along with extreme guilt over the thought of misrepresenting the Ace community and potentially invalidating the identities of roughly 1% of the U.S. population, made me feel exactly like that scared girl sitting in the chapel.

At that moment, I very cheesily told myself that, when I was ready and felt comfortable doing so, I owed it to that scared little girl sitting in the chapel to live happily and authentically, even if that meant admitting I was wrong about myself before and coming out with a new identity. I repeated to myself over and over again that my ace identity was valid because, with the feelings and information I had about myself at the time, that’s what I believed fit me best. And at this time, bisexual was what I believed fit me best. And that was OK. It was fine. I would be fine.

I identified as bisexual for about a year, and I’m not kidding when I say I truly thought that would be the end of my sexuality journey. I was happy. I was prioritizing my feelings for women — something I never thought I would be able to do. I had just entered a relationship with a woman who (spoiler) is still the most beautiful woman in the world to me. In all honesty, I could have lived out the rest of my life this way just fine. But my sexuality came knocking again. Not in a "mid-life crisis, your whole life is about to freak TF out" way, but in a "you’re not done learning" type of way.

As my girlfriend Katie and I lay in bed one weekend, we talked about sexuality and past crushes, and I joked that I wasn’t exactly sure of any of my past crushes on guys.

"Theresa, are you sure you’re bisexual?" she asked me.

The more I thought about it, the more it felt like this innocent question straight up drop-kicked me. I wanted to scream, "OF COURSE, I’M BI! WHAT ABOUT MY CRUSH ON ZAC EFRON, HUH??? ZAC!!!! EFRON!!!!" But I couldn’t. Because the question was valid. And when I was forced to really think about it, at that point in time, I was no longer sure.

After that question, Katie and I dissected every crush I said I had on a guy (OK, so, like, not that many), and I slowly realized each had been tied to friend(s) claiming that this person was the hottest person on Earth. My crush on a boy named Shawn in eighth grade? "He’s the hottest guy. Every girl wants to be with him," my friends said. My crush on a college wrestler? My best friend gushed for ages about how hot he was. My crush on Zac Efron? You get it.

In short, while I thought I had a history of being attracted to boys, I felt compelled to think boys were "hot" or "sexy" growing up because, well, that’s what everyone and everything around me conditioned me to believe. But that "attraction" never came about naturally. I never came to those conclusions on my own the way I did about women. I just didn’t realize it at the time. All I could do now was look at Katie and laugh. 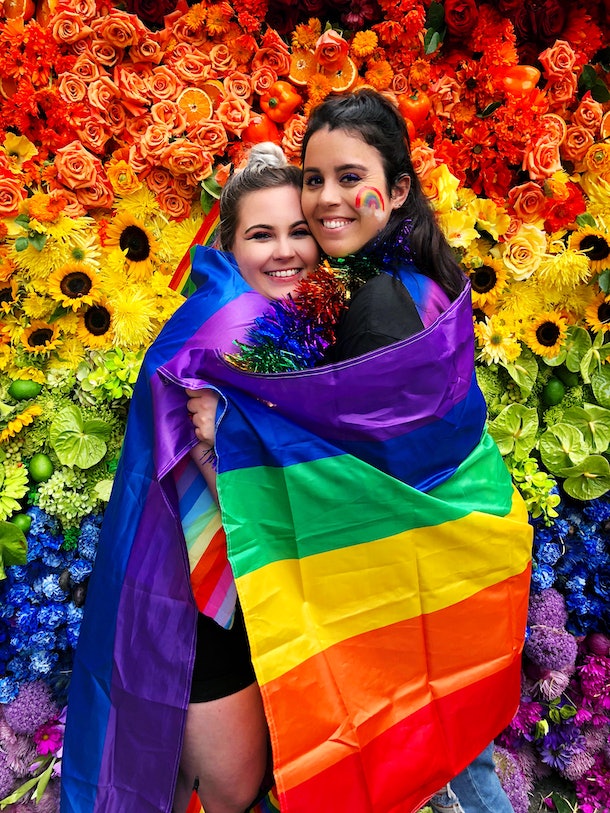 As far as I could tell at that point, and still to this day, I was right. I am a lesbian. I experience organic sexual attraction toward women exclusively, but I didn’t and still haven’t experienced any organic sexual or romantic attraction to men. (Sorry, Zac Efron. It’s not you, it’s me.) Did I still grapple with the same feelings of stupidity when I realized I was, indeed, a lesbian? Yes. Did I experience the same guilt at the thought of potentially invalidating the identities of bisexual people? Absolutely.

However, did coming to the conclusion that I’m a lesbian actually invalidate my ace and bi identities, as well as those of others? Not in the slightest. For some LGBTQIA+ people, learning they’re ace or bi or trans of non-binary is the end of their sexual identity journey. They remain comfortable and happy with that identity as they grow, and that’s OK. As for me and many others, discovering your sexuality can take time, and you come to the best conclusion you can, given what you know about yourself at every point in time and the state of your surroundings. As you learn new things about yourself, that may force you to come to a different conclusion. And that’s OK, too.

My experience with sexuality changing is absolutely not to say that one sexuality is a gateway to another. Rather, it lends itself to the idea that sexuality can, indeed, be fluid and, well, tough to figure out. Luckily for me, I’m the happiest and most comfortable I have been in my lesbian identity. But if that changes in the future — and it very well could — it will be fine. I will be fine.