The first thing hiker Nathaniel Maxwell noticed as he trudged towards an ancient rock cavern in the Grampians National Park last Saturday was the sound of dozens of voices singing Waltzing Matilda.

It was the Australia Day long weekend and as Mr Maxwell peered into the cave-like formation known as the Cool Chamber, he noticed that many of the men were wearing black T-shirts bearing a distinctive Celtic-style symbol. Others were wearing army fatigues. Some raised their arm in a Nazi salute. As Mr Maxwell walked away, he heard shouts of “white power!”

Alleged members of a far-right extremist group seen at Halls Gap and the Grampians.

Other hikers and residents of nearby Halls Gap in central Victoria watched members of the same group marching through the small tourist town on Sunday and Monday. They assembled around the local barbecue area, some shirtless with Nazi tattoos, and sipped coffee outside the Black Panther Cafe, which is staffed and owned by an Indian family.

“We are the Ku Klux Klan,” one of them belligerently told a local, who declined to be named for fear of repercussions. Another heard the group screaming racist slogans as they got drunk on Sunday night while camping illegally at Lake Bellfield, a beautiful body of water at the foot of the Grampians’ granite peaks and ridges.

When Halls Gap resident James passed the group on his mountain bike on Sunday afternoon in town, he was addressed with a Sieg Heil.

“There were 40 white males, many with skinheads, some chanting ‘white power’. That is intimidating for anyone, let alone the young Asian families sharing the barbecue space,” he says. 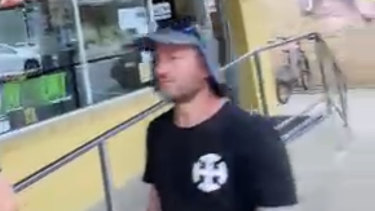 A group member in Halls Gap.

James, who also declined to use his full name for fear of repercussions, was one of several residents who called the local police only to be promptly called back by detectives working with Victoria Police’s Counter Terrorism Command intelligence-gathering division. The division is monitoring right-wing extremist groups in Australia, alongside intelligence agency ASIO, which was also notified about the gathering.

The detective asked James to take photos, which he did using his helmet camera. It sparked a confrontation with two “big burly guys”.

“It was pretty terrifying at that point. I told them I was a tourist and wasn’t filming them,” he says.

Luke Baker also called the police and was contacted by a force intelligence officer. Luke says he feared for the local Indigenous children and teenagers in town.

“They have a right to feel safe,” he says. 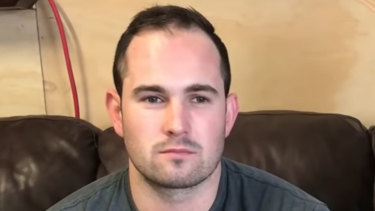 Tom Sewell of the Lads Society.Credit:YouTube

The decision of Halls Gap locals to call the police and the immediate law enforcement response is indicative of a change in the way authorities, and many in the general public, are viewing extreme right-wing groups.

They were once widely dismissed as little more than disorganised attention-seeking misfits spruiking racist political manifestos, but Australia’s policing and security agencies are increasingly concerned about the capacity of a group adherent or lone wolf feeding off social media posts to commit an act of domestic terrorism.

The 2019 terror attack by an Australian on a mosque in New Zealand that left 51 dead served as an ideological rallying point for some far-right groups, and a reminder of the potential consequences of underplaying the potential threat.

ASIO recently revealed that 40 per cent of its resources are being directed towards right-wing extremist groups.

ASIO’s deputy director-general, Heather Cook, told a parliamentary committee last year the COVID-19 pandemic was fuelling a surge in radicalisation because “of the amount of time individuals are spending in isolation, working from home or not in school”.

The Canadian Parliament is now debating a move to declare the far-right group the Proud Boys a terrorism entity. In Melbourne last November, a lone-wolf extremist on the fringe of local far-right groups, Philip Galea, was jailed for 12 years for planning a terrorist attack on Trades Hall, the Socialist Alliance’s Melbourne headquarters, and the Melbourne Anarchist Club.

The mainstay ideology of Australian far-right groups remains viciously racist and incoherent, experts and police say. The danger in reporting on them is that it risks feeding their craving for attention as they trawl for fresh members and resources.

According to one policing intelligence official, who declined to be named because he was not authorised to speak with the media, some of the groups are attempting to “shed their history of being disorganised and fracturing”.

In other words, they are getting organised. In doing so, they potentially pose fresh and difficult policy challenges for state and federal governments, some which will be canvassed in a recently launched federal parliamentary committee inquiry into far-right extremism.

According to extremist experts, two right-wing groups, the Lads Society and Antipodean Resistance, recently helped form a new Australian extremist outfit, the Nationalist Socialist Network, which in turn helped organise the 38 young white men to assemble in the Grampians over the Australia Day weekend.

The Age and The Sydney Morning Herald have identified some of the key organisers and participants of the Grampians gathering. Some show the faces of young men who would prefer to stay in the shadows — posing in their own online posts with faces covered.

The organisers were the Lads leader Tom Sewell, raised in the middle-class suburb of Balwyn in Melbourne, and Stuart Von Moger, a security guard who has appeared at several far-right events and meetings with political figures who were unaware of his ideology. The Lads have also been accused of a failed attempt to branch-stack the NSW Young Nationals in 2018.

Mr Sewell has claimed in a social media post that the Grampians event was aimed at providing “content” for a new neo-Nazi group, the European Australian Movement.

He has the hallmarks of some far-right activists in the US, including those who stormed the Capitol three weeks ago, a move which Mr Sewell said in one online message had lessons for Australian extremists.

His posts indicate that he is a racist conspiracy theorist appealing to marginalised, underemployed young Australians on the fringes of society. He is also ex-Australian Army.

Several in his Grampians group may have also been ex-military. Photos show some wearing army-issued boots and packs.

Mr Sewell is shunning mainstream social media sites, which are increasingly seeking to ban extremist content, and instead posting on new online platforms popular with extremists. On one site, he has posted videos of the name tags of the police that approached his group in Halls Gap on Monday, along with audio in which he belligerently challenges a policeman to “Google me, mate”.

Key questions for the parliamentary committee and legislators will be how to regulate these online sites, as well as whether to proscribe far-right groups as terrorist organisations.

Extremist expert Dr Lydia Khalil of the Lowy Institute says that while the proscription debate is important, it faces several legal and political hurdles and should not be viewed as a catch-all solution.

She says early prevention is critical and that government agencies — having “belatedly” expanded their focus from programs targeting would-be jihadists to right-wing extremists — must concentrate on tailoring interventions to far-right groups. But this, too, was no easy task, given such organisations are more diverse than some jihadist groups.

Dr Khalil says anti-terror agencies successfully worked with the Muslim community to deradicalise at-risk youths but there are far fewer levers to target Australians drawn to neo-Nazism, extreme patriotism or other far-right ideologies.

“You are dealing with a small, discrete threat that resides within the larger Anglo majority,” she says. “That makes it much harder for policymakers to not only tailor, but given the polarised political environment, justify these interventions.”

Mr Sewell spews a mix of anti-government and anti-society comments, patriotism and white supremacy in his calls for action. He is also virulently anti-Semitic.

On Wednesday, federal Treasurer Josh Frydenberg, who is Jewish, described the presence of far-right groups at Invasion Day rallies as “frightening for us all”. He also announced federal support for a new Holocaust museum in Canberra.

Groups like those linked to Mr Sewell appear to want to terrify.

“They looked like Nazis from a Hitler movie,” a Halls Gap cafe owner said of her experience confronting the group of men over the weekend. “And they were.”

Know more about the Grampians trip participants, the Nationalist Socialist Network or any other far-right groups? Contact (anonymously if preferred) [email protected]