Every so often, a television show comes along that has a positive impact on your life. For me, it is The Great British Bake Off. I’ll watch an episode and then spend an entire afternoon whipping up a Key lime pie.

But for every inspiring Bake Off moment, there’s a program that has the opposite effect – shows so terrible they exist solely to ruin activities you previously enjoyed. This brings us to Sex/Life, the latest Netflix buzz binge that has the whole world talking. And rewinding and pausing (if you know, you know). 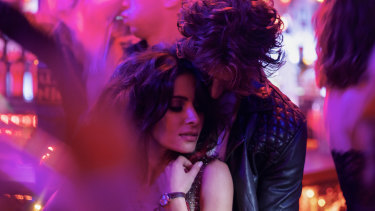 Sarah Shahi and Adam Demos star in Sex/Life, the show that’s got so many people talking. Credit:Netflix

Once upon a time, I was quite fond of both sex and life, but having endured all eight episodes of this bafflingly popular show – nearly two weeks since its launch it remains number one on Netflix’s top 10 – I can safely say that sex and life are ruined forever.

On the surface, the show tells the story of Billie (Sarah Shahi), a bored suburban mother who decides to blow up her white picket life by fantasising about stumbling into the arms of her bad boy ex, Brad (Australian actor Adam Demos). But dig a little deeper and you’ll find a very naked truth: Sex/Life is nothing more than a series of dimly-lit sex scenes propped up by groan-inducing dialogue.

While the show had the potential to slot into the beloved “so bad it’s good” category, instead, it belongs in the “so bad I regret it” folder. Here are all the reasons why.

Spare me the Pool Sex myth.

In the show’s flashbacks, Brad and Billie consummate their relationship in his rooftop pool. Much like every exchange in the show, it’s loaded with tension and orgasms. Billie later recreates this scene with her husband, Cooper (Mike Vogel), and promptly achieves the same result.

Both pool-gasms are incident-free; no one sprains their ankle on a roaming pool filter or discovers a nasty chlorine rash. And herein lies the most significant danger of Sex/Life: it’s selling a dream where only fantasy exists.

Sitting through these scenes with my wife, I worried that the sex life we were living might pale in comparison to the fantasy we were watching. All my fears were dispelled when she violently rolled her eyes and let out a long, “Assss ifffff.” Now that’s sexy.

If Billie is bored with her perfect life, what hope do the rest of us have?

In the opening minutes of the first episode, we learn that the conflict of Sex/Life is this: Billie is bored with her life. Fast forward to the finale (spoiler alert), and that narrative arc hasn’t shifted at all.

Billie spends eight episodes moping around New York and Connecticut, lamenting that she is older and reminding us that things were crazier when she was young. Passing by a cupcake shop that was once a tattoo parlour, Billie throws her hands in the air: “Everything’s changed!”

It’s hard to empathise with a character whose sole problem is that eight years have passed and her life looks different. Sure, there is potential to explore the frustrations of parenthood and loss of identity, but Billie doesn’t cut a sympathetic figure. 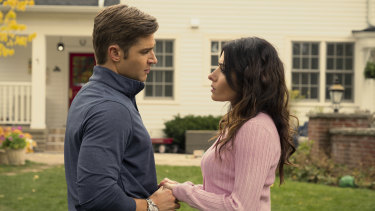 Billie’s seemingly perfect life isn’t so perfect… at least for her. Credit:Netflix

It doesn’t help that her current setup seems pretty ideal on paper: Billie lives in a McMansion, is married to a chiselled banker with morals and seems to wear a white nightie all day long. Sign me up.

Showering at the gym is now cancelled.

Easily the biggest (don’t) talking point to come out of Sex/Life is the now infamous shower scene. Billie’s husband Cooper follows Brad to the gym, desperate to see what the big (I can’t stop) deal is with this guy. They end up showering next to one another, and when Brad turns around, Cooper quickly learns that much of Brad’s appeal stems from his enormous penis. The camera lingers for about five seconds too long (again, apologies) before panning away.

Naturally, the scene has sparked a million “OMG, is it real?” debates online, but more importantly, it’s turned an entire generation of men off showering at the gym. Myself included.

Oh, and so is FaceTime.

It seems especially cruel that in the age of FaceTiming, Sex/Life has tainted the technology indefinitely. Across two episodes, Brad uses FaceTime to tempt Billie but succeeds only in creeping us all out. 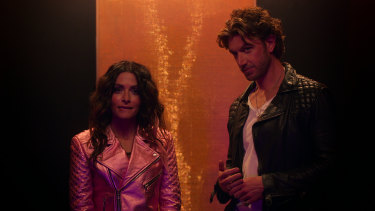 Billie (Sarah Shahi) with Brad (Adam Demos), her ex-boyfriend who has single-handedly ruined FaceTime for all of us. Credit:Netflix

First, he encourages her to watch him have sex with her best friend Sasha, which is not only gross but problematic. Next, he FaceTimes her at home and, after a few brief pleasantries, aims the camera down towards his crotch.

And just like that, I’m benching my weekly FaceTime with Nan.

Tension is key to any engaging television show but Sex/Life ignores this rule and, instead, major plot points are either thrust in your face or shoved down your throat – sometimes both!

The show frantically bounces between sex positions and expositions, making every point clumsily clear in the most heavy-handed of ways.

We know that Billie is feeling suffocated by her suburban trappings, thanks to the near-constant narration. But just in case we missed it the first 50 times, we’re treated to a scene where Billie’s son captures a butterfly in a jar. “She can’t breathe in there, and she’s gonna die if you don’t let her out,” explains Billie.

Turns out metaphors, like everything else in this show, come at you hard and fast.