Home » Lifestyle » New coins next year, but you’ll have to wait longer for a King Charles $5 note

New coins next year, but you’ll have to wait longer for a King Charles $5 note

King Charles III will become only the second monarch to feature on Australia’s decimal currency when his effigy is etched on coins, but new $5 notes with his face on them could be some years away. 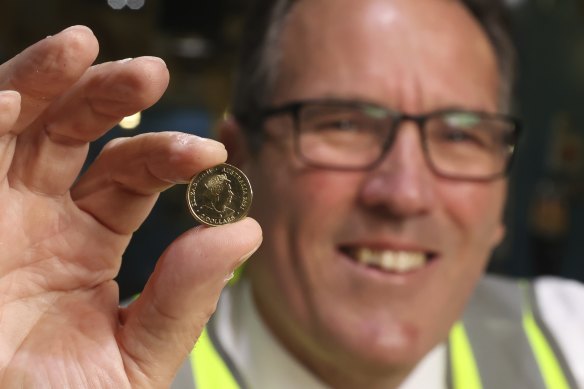 The Queen has featured on all Australian coins in the decimal currency age, including this $2 coin held by Royal Australian Mint CEO Leigh Gordon in 2021.Credit:Alex Ellinghausen

Queen Elizabeth II has been the only monarch to feature on Australia’s decimal currency, which was introduced in 1966.

Produced by the Royal Australian Mint, coins featuring the Queen will remain legal tender, so there will be a mix of coins with either monarch in circulation for some time.

Notes are produced by an arm of the Reserve Bank, and creating a design for a new banknote is a complex process. A spokesperson said it could take several years between when a banknote is printed and when it goes into circulation, and newly printed bills were released as they were needed.

“There will be no immediate change to Australian banknotes,” the RBA’s spokesperson said.

“The $5 banknotes featuring the image of her majesty the Queen can continue to be used. They will not be withdrawn, and are likely to remain in circulation for years to come.”

An official portrait of King Charles will be required before the artwork for the updated note can be completed.

There is more than $1 billion worth – or 200 million individual – $5 notes in circulation.

The current $5 polymer note was first released in September 2016 as part of the Reserve Bank’s upgrading of the entire banknote series.

A Reserve Bank spokesperson said it was tradition for the reigning monarch to appear on Australia’s lowest denomination banknote.

Queen Elizabeth appeared on the original $1 note that went into circulation in 1966 to replace the 10 shilling note. The $1 note image was based on a photographic portrait commissioned by the RBA in 1964. That note went out of circulation in 1984, replaced by the $1 coin.

The Queen then appeared on the new polymer $5 note in 1992. That image was based on a series of photos commissioned by the RBA in the early 1980s.

The Queen’s portrait has undergone more changes on Australian coins.

There have been six versions of the Queen’s portrait on coins since her coronation in 1953, five of which were on decimal coins. All bar one were designed in the UK – coins with a portrait by Royal Australian Mint designer Vladimir Gottwald were used on a commemorative coin in 2000. The most recent portrait was designed in 2018.

While all effigies of the Queen have faced to the right on coins, the Royal Australian Mint expects the coming portrait of King Charles will face to the left.

That’s because of a royal convention that a new monarch’s portrait faces the opposite direction to their predecessor; a tradition which is believed to have started with Charles II between 1660-1685.

Receive a wrap of our coverage as the world mourns Queen Elizabeth II in our Morning Edition newsletter. Sign up here.