Public elementary schools in New York City will begin reopening on December 7, Mayor Bill de Blasio said Sunday. The largest public school system in the country closed on November 19 when the city reached a seven-day COVID-19 testing positivity average of 3%, but de Blasio said Sunday that metric will no longer be used.

Middle and high schools will remain closed. There are about 1.1 million students in New York City’s public school system, and around 330,000 students could be eligible to return to school under this plan. But students who have opted for all-remote learning will not be able to opt into full in-person instruction at this time, meaning the number of students who return will be much lower than 330,000.

If they have already opted for in-person learning, students in grades K-5, pre-K and 3K will be able to return to five-day-a-week in-person instruction starting on December 7. Later that week, on December 10, schools in the special education program known as District 75 will be reopening.

Students can only return to school if they have returned consent forms agreeing to be part of random testing for COVID-19. The previous plan had tested a random sampling of students monthly — the new plan will test students weekly. 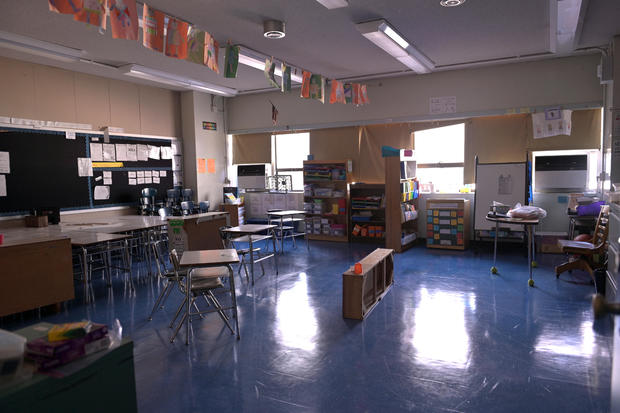 “Whatever happens ahead, we want this to be the plan going forward, because we now believe we know what we didn’t know back in the summer,” de Blasio said at a news conference on Sunday. “We know what works through actual experience and we know that if you put a heavy emphasis on testing, and you continually reinforce those health and safety measures … We know you can keep the schools safe for the duration and link up to that day we have the vaccine that changes the whole reality for all of us.”

De Blasio’s news conference on Sunday marks yet another change in the city’s plan to reopen schools. This summer, the city had pushed forward with reopening all schools and using the 3% metric. But even in September, school openings were delayed twice as the city and school system tried to work out rocky logistics and political realities.

The positivity rate among New York City’s schoolchildren was extremely low in the eight weeks schools were open this fall. De Blasio insisted Sunday the school safety plan will remain the same, including mask-wearing and social distancing.